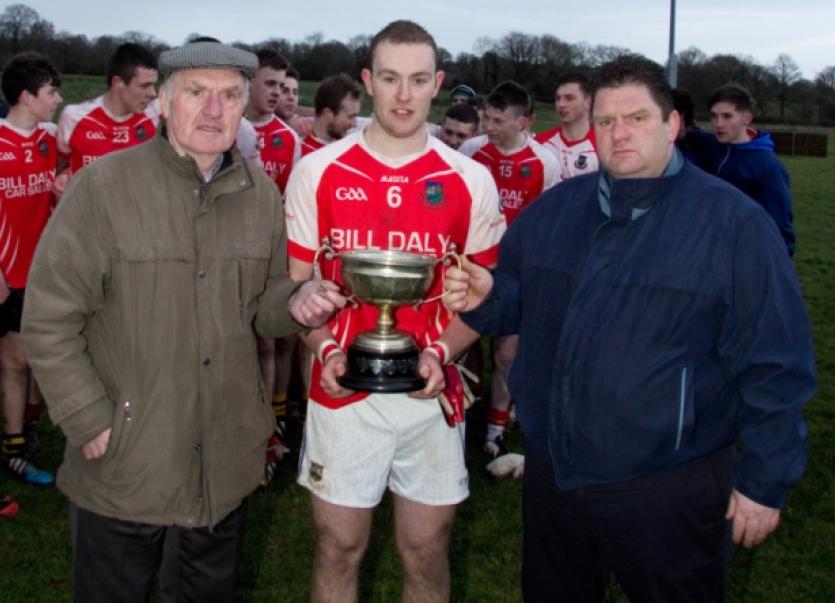 The combination team of Galtee/Emly are McGrath Oil West under-21 A football champions following their victory over Arravale Rovers at Cappawhite on Sunday evening.

Played in miserable conditions on a greasy surface, the two teams served up a strenuous game of football in which the verdict was in doubt up to the last minute.

Arravale Rovers owned most of the first quarter and had registered 1-2 by the sixteenth minute, the goal coming from Ciaran Lowry following a perfect pass from Daragh Coughlan. Galtee/Emly’s first foray into the Arravale half didn’t come until the fourteenth minute and this resulted in a pointed free from Daire Egan.

Galtee/Emly had the better of the exchanges during the second quarter during which they added two points from Daire Egan, one from a free, to leave Arravale in front by 1-2 to 0-3 at the interval.

Arravale added two points during the third quarter to put them further ahead and they looked likely winners at this stage.

Galtee/Emly were struggling to make progress against the stronger Arravale side and most of their attacks came to nought. They were also guilty of poor shooting.

Andrew Vance gave them hope with a point in the sixteenth minute and this was followed with a fourth point from Daire Egan two minutes later.

Then their whole effort was transformed by a goal in the twenty-first minute. Stephen O’Dwyer, who had come strongly into the game in the second half, delivered a good ball into the Arravale square and it was finished to the net by Darren McGrath. The score put Galtee/Emly ahead by 1-5 to 1-4.

Daragh Coughlan levelled for Arravale in the twenty-fifth minute and in a frenetic final six or seven minutes both sides strove for the winner.

The lot fell to David Finane, who had been replaced in the middle of the first half. He now resumed in place of the injured Jason Ryan and had the joy of sending over the final score and bringing victory to Galtee/Emly.

Daire Egan was Galtee/Emly’s most prolific scorer and he was well supported by David Byron, Eric Grogan, Stephen O’Dwyer and Damien Bourke. Tommy Lowry had a fine game for Arravale Rovers and he was helped by Emmet Fitzpatrick, Oeter Mulhaire and Daragh Coughlan.