Commercials hold strong at the back to claim title 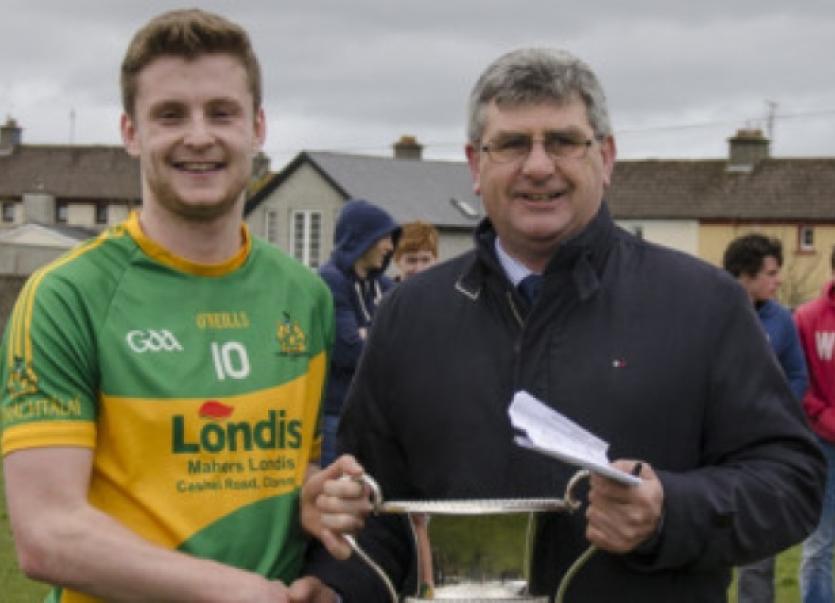 Clonmel Commercials retained their South Under 21 title with a three point victory over Moyle Rovers at Fethard on Saturday last.

Clonmel Commercials retained their South Under 21 title with a three point victory over Moyle Rovers at Fethard on Saturday last.

In difficult windy conditions both these sides served up a terrific contest.

The weather may have taken somewhat from the skill levels but the battling qualities of these players shone in the conditions as once again these clubs clashed in a hard fought contest where sportsmanship was a winner.

The wind was a major factor and if anything it favoured Commercials in the opening half. Moyle Rovers opened the scoring through full forward Shane Lonergan in the 4th minute. Paudie White levelled matters for Commercials two minutes later from a close range free. The early exchanges were hard and frantic with both sides attempting to establish a foothold in the game.

As a result there was little pattern to proceedings. Understandably due to the conditions there were many mistakes with both sides guilty of giving away possession cheaply.

It took until the 16th minute for the next score to arrive when Stephen Quirke edged Rovers ahead. Once again the response was swift from the champions as Paudie White again scored from a free a minute later. Commercials’ first point from play arrived from corner forward Shane Flynn in the 20th minute to cancel out Quirke’s pointed free a minute earlier as the sides were once again deadlocked. The final ten minutes of the half failed to yield a score. Moyle Rovers were on top in this phase but were forced to shoot from distance as Commercials’ defence stood strong. Rovers shot three wides before the half time whistle sounded.

Moyle Rovers began the second half in bright fashion and dominated the early exchanges. Once again Commercials can thank their defence as they repeatedly forced their opponents to shoot from distance. Rovers registered five wides in the opening 13 minutes before Stephen Quirke pointed from a 13 metre free. This was the game’s first score in 23 minutes of play as the conditions and both defences made it difficult for forwards.

Paric Looram had the equaliser in the 19th minute before an excellent score from Paudie White gave Commercials the lead for the first time as the game entered its final ten minutes. Commercials’ captain Jason Lonergan put over a free five minutes from time and for the first time there was two points between the sides. A wonderful Danny Owens point four minutes from time left just a single point between the sides.

Although Moyle Rovers launched three attacks in an attempt for an equaliser, again they found the Commercials’ backline resolute. When Jason Lonergan pointed a minute from time, Commercials could sense victory and when Paric Looram raced through the Moyle Rovers back line in injury time his shot flew narrowly over the bar. The final whistle brought to an end a highly entertaining final and cued the celebrations for Commercials

Moyle Rovers will be disappointed to have come up short but with a young team and some excellent footballers in their ranks there will be great encouragement for the Lisronagh club. Morgan Irwin, Danny Owens and Paddy Morrissey were solid at the back with Owens equally effective in attack when switched. Around the centre of the field Stephen Quirke, Luke Boland and Ross Mulcahy were prominent throughout while  Dominic Walsh, Brian Gleeson and Shane Lonergan were the pick of the forwards.

Commercials had many fine performers including Cathal McGeever, Jack Kennedy, Ian Fahey, Paudie White, Jason Lonergan, Ross Peters and Shane Flynn, but none were better that Kevin Fahey who led the backline manfully and was tremendous all day.