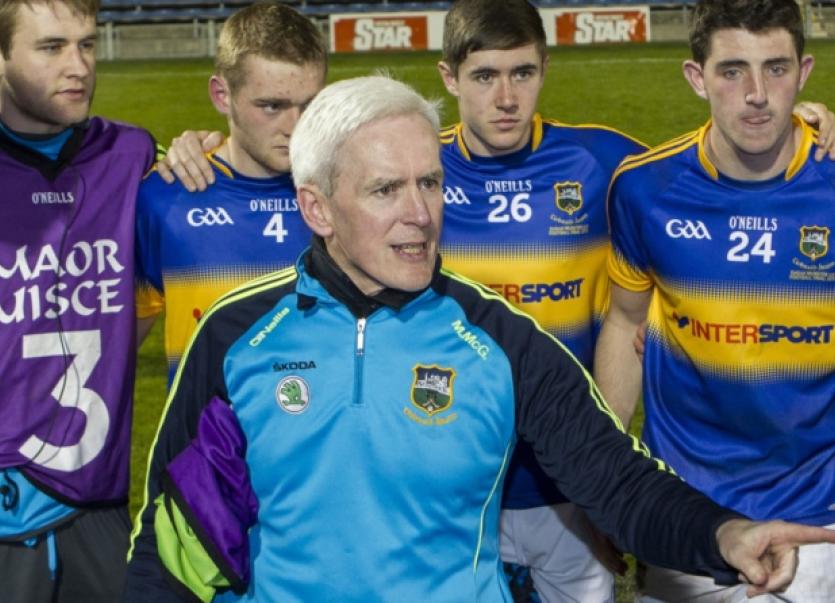 Much travelled football coach Michael McGeehin has been around the block quite a bit over the years but still jumped at the opportunity to become involved with Tipperary when asked.

Much travelled football coach Michael McGeehin has been around the block quite a bit over the years but still jumped at the opportunity to become involved with Tipperary when asked.

The Letterkenny native, who is a director of Coaching Ireland based in Limerick, has a truck load of experience going back 25 years with club and county sides. It is widely acknowledged that his input to Peter Creedon’s set-up has added greatly to Tipp’s rise up the rankings.

The incredibly busy Donegal man took a few minutes out at the recent press night to give his views on football.

On the impact of football on his day-to-day life and travel, he said.

“I work in Limerick. I am a director of Coaching Ireland. We have the responsibility for all sports coaches in the country from GAA right down to other sports. I represent Ireland on a couple of European committess as well from a coaching perspective and sports education. That takes me away a bit and takes a bit of juggling. I also live in Donegal and they weren’t joking when they said it’s a long way to Tipperary. I’ve been in the job in Limerick for nine years. For example on Sunday I left Donegal at half eight in the  morning and got home at around 10 o’clock on Sunday night.”

To make the commitment to Tipperary, you must have seen the potential?

“If I had a euro for every time it was said to me... Who are you involved with now? And I said Tipperary and they said the hurlers and I would say no the footballers. Do they have a football team?.... I’d probably be a wealthy enough fella.

“There is a perception out there that there is no football team down here.

“A few years ago, I was brought in while I was still with Limerick, to give a few sessions at the end of a season when they were playing Kerry and I saw the potential of the players that were here. When I was asked then to get involved last year I jumped at the opportunity. I do like to take challenges on.”

“I have been involved with teams in the past. I was on the periphery with John Maughan in 1992 when Clare won the Munster championship. I was also involved that year on a full-time basis with Mayo when we won the Connacht championship and then Donegal beat us in the semi-final. They are all achievements. I have been involved in the club scene with St. Eunan’s up in Letterkenny and we won three senior championships - one in 2012 when Donegal won the All-Ireland that was against Glenties. We won the game with 14 men, a game that maybe we shouldn’t have won but we won it. That’s a major achievement.

“But certainly for this group of players I would be delighted for them to beat Kerry. For the amount of effort that they put in, for the talent that’s in the squad. Obviously there is a tradition of hurling down here and it’s against that backdrop that we have players that have to contend with playing club hurling championships, club football championships and then we expect them to train with us. Whereas other counties like Donegal, like Kerry, they will have four or five weeks rest from club activities to just focus on their next game which is a huge advantage. So if we were to win with that backdrop it would be a major achievement.”

“The gap has been narrowing a little bit. We are a Division 3 team and we are playing the All-Ireland champions, that’s the reality. We would like to think that we have improved and in a once-off game at home anything is possible. But we have to have a lot of things that will go right for us, and that means effort from everyone and no injuries between now and then. It is certainly going to be a challenge but it’s not something that is going to strike fear into us because we embraced a few challenges last year as well and came close,” concluded the Tipperary coach.