Commercials hold all the aces to end Loughmore’s long reign 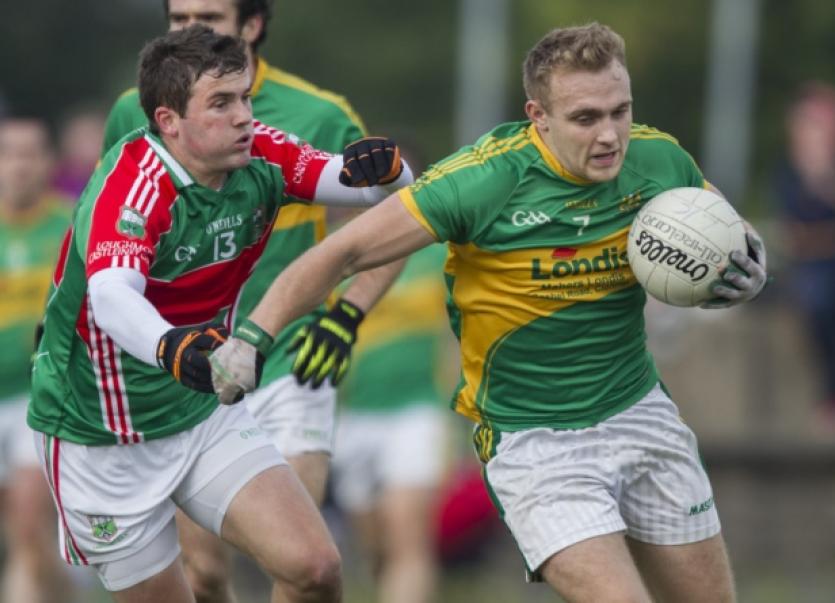 Two goals in as many minutes early in the second half proved crucial as Clonmel Commercials shattered Loughmore/Castleiney’s bid for a three-in-a-row of County Senior Football Championships in emphatic fashion in Sunday’s quarter-final in Cashel.

Commercials were ahead by 0-10 to 0-6 and already motoring well when those goals put the game to bed. The first arrived in the 12th minute when Ian Fahey took a pass from Jamie Peters and slalomed his way through the Loughmore defence before shooting past goalie Dominic Brennan.

A minute later a chain of passes assembled by Jason Lonergan, Ian Fahey and Padraig White left the Loughmore rearguard in tatters and ended with Eoin Fitzgerald firing to the net. Suddenly the champions found themselves 10 points in arrears and their cause was a lost one.

From there to the finish Commercials were broadly comfortable. These great rivals have fought out some close and exciting battles down the years but this wasn’t one of them. Such a convincing win over the holders and one of the championship favourites will give Commercials considerable momentum heading into Sunday’s semi-final against either Aherlow Gaels or Eire Og Annacarty/Donohill.

They could hardly have envisaged that they would be in a position of such dominance with a quarter of the game remaining when they lost Michael Quinlivan, one of their most influential players in the opening half, to a black card 6 minutes before half-time. Mind you his replacement, Ian Fahey, wasn’t bad. He scored their opening goal, had a big hand in the second and played a major role in helping his side take complete control.

This meeting of the champions for the last 3 years (Commercials in 2012 and Loughmore in 2013 and 14) was a tight, cagey affair in the early stages. They were level three times in the opening quarter of an hour, and with each side placing the emphasis on a possession game and deploying a blanket defence when their opponents were on the attack an intriguing battle unfolded.

The highlights of the opening exchanges included a mighty point from play from way out the field by Michael Quinlivan, who scored half of his team’s six points before his enforced departure; a point from his Commercials team mate Jason Lonergan, who rounded off another long passing movement; and a threatening run on goal by Loughmore’s John McGrath, who was brought down before James Egan converted the resulting free.

Gradually, however, the Clonmel side began to get on top. Their goalie Jake McDonald made a good save from an Evan Sweeney shot that seemed to be dropping over the bar and then three points in four minutes provided them with some breathing space. Michael Quinlivan’s converted free was sandwiched between two fine scores by Seamus Kennedy and the pacy Padraig White and they had a lead they would never relinquish.

Liam McGrath hooked a shot over the bar a minute after Quinlivan’s departure but if anything the loss of one of their talismen only galvanised Commercials. They began to move through the gears and had three points in the closing two minutes of the half from Aldo Matassa, Padraig White and a long-range Ian Fahey free to give them a sizeable 0-9 to 0-4 lead at the midway stage.

Loughmore’s supporters began to find their voices when James Egan’s free and Liam McGrath’s ‘45 sliced the deficit to 3 points within 5 minutes of the re-start. But things started to go downhill rapidly for the Mid side. Joseph Hennessy departed when he received a black card and referee Derek O’Mahoney was unmoved when they appealed for penalties on two separate attacks, before an unanswered 2-1 from Commercials in the space of 7 minutes left them reeling. Loughmore pressed hard for a goal in the last quarter and Liam McGrath went close in a goalmouth scramble but Commercials survived and a Padraig White free sent them 11 points clear with 13 minutes remaining.

Loughmore got the breakthrough for the consolation goal their efforts deserved when Aidan McGrath drove a spectacular shot to the net with four minutes left. Fittingly, though, Commercials had the final say and they might even have had a third goal, only for Dominic Brennan to deny Padraig White with a great save before Johnny Harney put the rebound over the bar.

Commercials have put the disappointment of their South Final defeat by Kilsheelan firmly behind them as they now go in search of their first county title in three years. As well as Michael Quinlivan and Ian Fahey this victory was also achieved courtesy of the outstanding performances of a host of players including Padraig White, Kevin Harney, Jack Kennedy, Aldo Matassa, Jamie Peters, Fergal Condon and Seamus Kennedy.

Loughmore have reached the end of the road after a highly emotional year for a club that no doubt will come roaring back into contention in hurling and football next year. As a team they lost their way on Sunday but that wasn’t the fault of Liam McGrath, James Egan, Tom King, Cian Hennessy and Aidan McGrath.