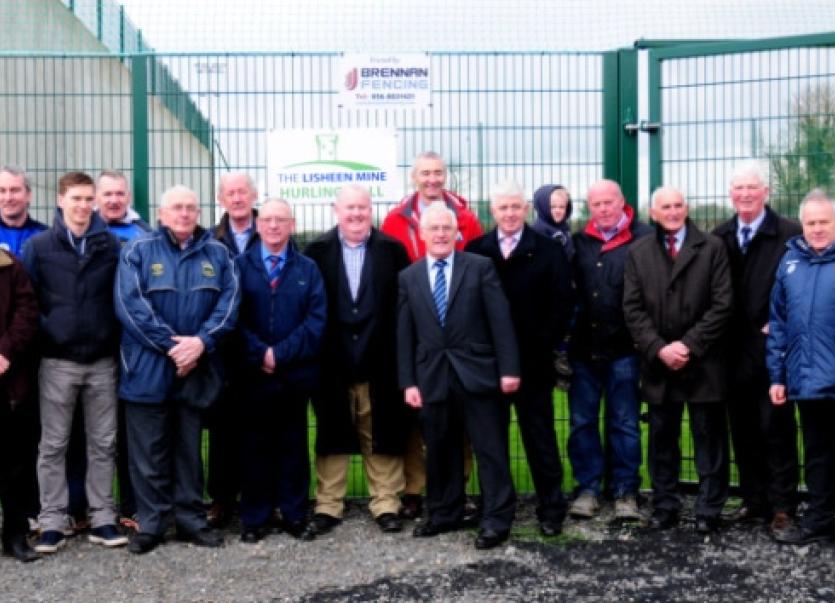 The opening of the Lisheen Mine Hurling Wall at Dr Morris Park in Thurles on Saturday edges the fantastic County GAA Board facility closer to being a centre of excellence.

The opening of the Lisheen Mine Hurling Wall at Dr Morris Park in Thurles on Saturday edges the fantastic County GAA Board facility closer to being a centre of excellence.

Already the envy of many a Board in the country, Dr Morris Park’s latest addition enhances significantly the training infrastructure of the venue which exists in the shadow of Semple Stadium, and represents a tangible investment into the future hurling needs of The Premier County.

The fully floodlight, astro turf facility allows teams - hurling and football - to train in all weathers and increases hugely the range of drills and skills which can be worked on by players under the watchful eyes of management teams.

Who better to cut the ribbon on this hurling wall than Tipperary legend Jimmy Doyle - a man who honed and sharpened his skills against a wall in Bohernanave. He was on hand alongside Alan Buckley of Lisheen Mine to officially open the facility and Jimmy also cast an eye over the U-16 development squad which demonstrated a range of drills which can be worked on against the wall.

The land for Dr Morris Park was purchased from the Smee family in 1995 - Stevie Smee and his family were present on the day as well - and since then significant development has taken place. The two fields were developed, lighted and manicured, while a third was added in recent times, again with the support of the Smee family.

There have been many up-grades to the facility since, with former County Development Officer John Ryan overseeing the work. Dugouts and enhanced lighting have been added while the work associated with the Lisheen Mine Hurling Wall was very significant - John Ryan oversaw the lot and Sean Nugent paid huge tribute to him stating that his interest, energy and knowledge in this area is second to none. He also thanked Caretaker Pat O’Callaghan for his great work in maintaining the grounds and facilitating training and matches.

The main contractors for the work were Andy Fogarty concrete from Templederry and Kevin Kilmurray from Offaly who prepared and laid the astro turf. County Board Chairman Sean Nugent paid tribute to the contractors and also to local family, the O’Dwyer’s, The Commons, Thurles who helped facilitate works on the project.

Sean Nugent paid tribute to the work of his predecessors in moving forward at all times with the development of Dr Morris Park. Work had been undertaken when funding allowed and he thanked very sincerely Lisheen Mine for their generosity in helping out with the project.

“Lisheen Mine will never be forgotten for what they have done for us. Young and old players alike will be able to work on their skills for many many years to come right here just as Jimmy Doyle did during his time too,” Sean Nugent said.

Dr Morris Park, according to Board Secretary Timmy Floyd, is where the plans and dreams for Tipperary hurling and football are hatched. It is where the hard work is done during the winter, spring and summer months and has been ‘the engineroom’ of the county, he said.

Alan Buckley was joined by Jimmy Dunne, Dominic Everard and Terry McKenna of Lisheen Mine at the event. And Jimmy Dunne, a former Tipperary footballer, said that the Board had been pushing ‘an open door’ when the approach was made in relation to the hurling wall.

“The whole development of infrastructure fits in very nicely with the mantra of what we are all about in Lisheen Mine. We see ourselves as being neighbours in the parish of Moyne Templetuohy and we like to be associated with any project that will stand the test of time, long after we are gone. This hurling wall is part of the master plan for Dr Mo rris Park and of the bigger picture for Tipperary GAA,” Jimmy Dunne said.

Among those present at the launch were Eamon O’Shea nd Michael Ryan of the senior hurling management team - they have used the facility extensively and will do so in the coming months as well - right up to September hopefully.

Ciaran Lynch of LIT Tipperary and also Chairman of the North Tipperary Sports Partnership was also in attendance as well as County Board officers.

Prior to the opening, Dr Morris Park was alive with over 300 youngsters taking part in a blitz - this fantastic facility is in demand, in use and invaluable to the GAA in Tipperary.