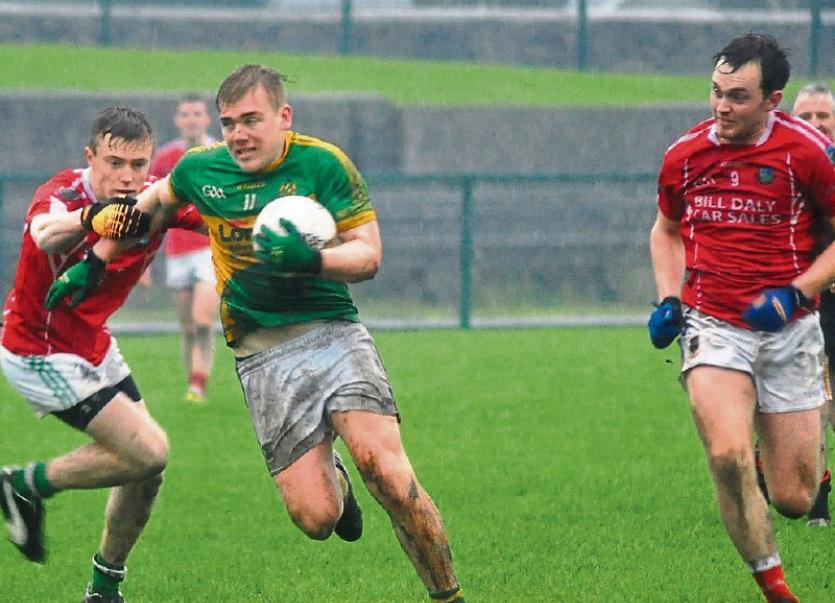 Clonmel Commercials remain on course for a remarkable sixth County Minor A Football Championship success in-a-row after they beat the combination team, Galtee Rovers/Golden-Kilfeacle in a semi-final played in a downpour at Clonmel Sportsfield on Saturday.

With the County Senior and U-21 titles already secured, the club is still on track for a unique treble of county championships.

However a highly-rated Drom/Inch outfit, who beat Newport by 0-17 to 2-9 after extra time in the other County Minor semi-final, also played last Saturday, stand in the way of the Clonmel club completing a clean sweep of the county's major football titles.

The final will be played at 1.30 in Littleton this Saturday.

Commercials haven't lost a knockout match at Minor since Ardfinnan beat them in the 2009 South semi-final.

An early second half scoring burst saw them maintain that amazing sequence and helped put some daylight between themselves and a dogged Galtee/Golden team who played with tremendous spirit.

Commercials led by a point, 0-4 to 0-3 at the midway stage and they made the decisive break within two minutes of the restart.

Substitute Conor O'Sullivan had a point before a well-worked move through the heart of the Galtee/Golden defence ended with the highly influential Calvin Boland sending a powerful shot to the net.

Commercials were now five points ahead and in the difficult conditions it was a sizeable lead, one that senior player Jack Kennedy extended from a free six minutes into the second half to make it 1-6 to 0-3.

There was little likelihood of the west combination side forcing their way back into contention but that didn't stop them trying.

With only fifteen players at their disposal they were down to the bare bones and the lack of any substitutes increased the size of the task facing the team.

Yet they ploughed on regardless. Shane Ryan, who contributed all of their scores, converted a free and while they enjoyed plenty of possession the Clonmel defence, expertly marshalled by Kyle Peters, with Sean Adamson and Daragh Phelan also playing strong supporting roles, was never likely to be breached.

At the other end Jack Kennedy converted a free when Calvin Boland was fouled and the game had entered injury time when Ross Peters was rewarded with the score that his outstanding display deserved.

Shane Ryan closed the scoring with the last kick of the game in the sixth and final minute of injury time.

On a heavy surface and with rain teeming down from start to finish, it was a credit to the teams that they served up an entertaining encounter.

The game was mostly played in a sporting manner, helped by the sensible refereeing of Loughmore's Tom McGrath, although he had his hands full with a melee that broke out in first half injury time.

Galtee/Golden's Shane Ryan and Commercials' Gavin Ryan and Ryan Lambe received yellow cards at the end of that skirmish, which for a time threatened to turn nasty.

Verbal hostilities continued as the teams headed to the sanctuary of the dressing rooms at half time, although calm and order were fortunately restored when they returned for the resumption.

Commercials took the game by the scruff of the neck early in the second half but up to then had struggled to break down Galtee/Golden's stubborn resistance, despite enjoying the lion's share of the possession in the opening half.

The west team started the brighter and Shane Ryan put them ahead with a fine score after three minutes, a point that was cancelled out by Michael O'Reilly's equaliser two minutes later.

Ryan restored Galtee/Golden's lead when he scored under pressure, with Ryan Lambe levelling in the 10th minute.

Commercials gradually started to gain the upper hand, although three wides in the opening 11 minutes (they shot six in total in the first half, and three more in the second half) hindered their progress for a time.

When Michael O'Reilly commandeered Ross Peters' free and advanced for a very well-taken score after a quarter of an hour, the Clonmel team had a lead they would never surrender.

Calvin Boland supplied Ryan Lambe with the pass for their fourth point, although a Shane Ryan free from in front of the posts towards the end of the half was evidence of Galtee/Golden's determination to stay in the game.

However Commercials asserted their dominance with that early second half scoring surge and they'll approach the final full of confidence.

Jack Kennedy brought his experience to bear on the contest and provided great leadership from the centre of the field, where Gavin Ryan was also prominent.

Calvin Boland was a great rallying force in attack while Ross Peters, Eoin Hoctor and Ryan Lambe were always in the thick of things.

With three expertly-executed points from play, Michael O'Reilly also played a key role in the victory.

Shane Ryan, a focal point for many of their raids, carried most of Galtee/Golden's hopes.

They kept plugging away in the face of adversity in the second half, a period of the game when they shot four wides to add to one kicked in the opening half.

Yet with only one player responsible for all of their scores, and just two points from play over the hour the odds were stacked against them.

Clonmel Commercials will have it all to do if they are to win their sixth County Minor A Football Championship in-a-row, as they prepare to take on a fancied Drom/Inch in the 2015 final.

The game goes ahead at 1.30 at Littleton this coming Saturday, January 16.

Strong favourites Drom were pushed all the way by a determined Newport and it eventually took extra time to separate the sides.

Drom were three points behind at the break (1-5 to 0-5) and were in even deeper trouble when they were four points in arrears as the game entered the closing stages.

However late points from Michael Connors (0-2), Stevie Nolan and Tommy Nolan saved the day and Stevie Nolan converted two late frees in injury time to secure a deserved 0-17 to 2-9 win.