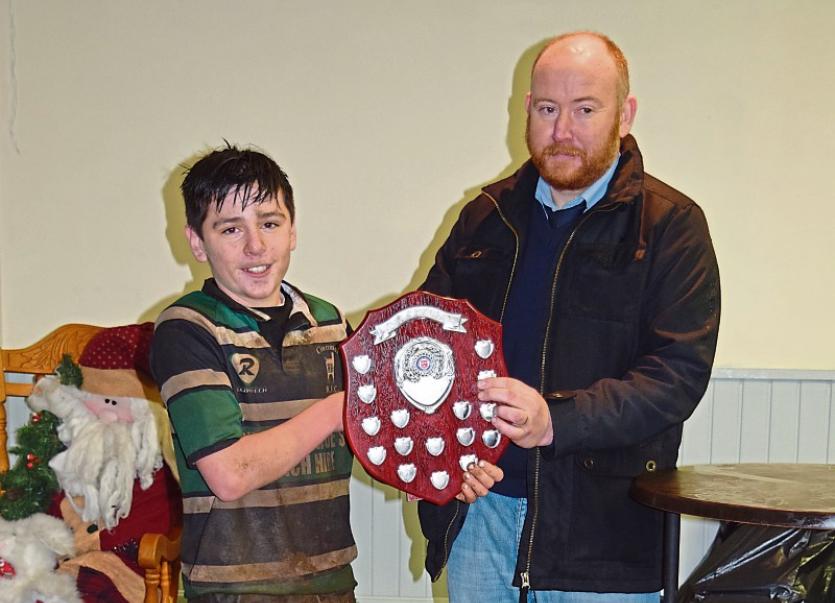 On a night when an ocean of rain fell, two unbeaten teams faced each other in the East Munster final in Thurles.

Nenagh and Clonmel had both come through their groups unscathed, won their quarters and semis and now faced each other.

Both teams have played running rugby with great verve. Indeed, this was how the game started. Clonmel ran at Nenagh from the off.

Crisp ball from the forwards was swept out from scrum half Aiden Hickey. Quick hands and pace saw the ball move from the right hand side to the left. Winger Eoghan Ryan did what he has done all season once he got the ball in his hands and finished the move in the corner.

Nenagh are a very strong team. They came back at Clonmel hard and but for fierce tackling by the back row of Adam Maher, Adam Buttimer and Oran Ryan, they might have got in for a try.

They did however, get a penalty which was slotted over by their centre.

As the weather grew worse, so did the ground. The muck stymied Clonmel’s running game and it became a night where defence became important.

Clonmel’s front row of Tim Nugent, Luca Dennehy and Brandon Delicato won a scrum against the head. From the ensuing ruck, winger Eoghan Ryan picked the ball and ran down the tramline, leaving the Nenagh defenders in his wake.

Eoghan put the ball down under the posts to make the kick easier for fly-half Rory Collins who duly converted. Half-time saw Clonmel lead 12-3.

Nenagh’s ire was up and they came out fired up. Both teams battered each other in midfield. Centres Sean Boyce and Samuel McGowran tackled everything that stood in their way. Rory Collins was the fulcrum for Clonmel, controlling the game like an American football quarterback. Wingers Riain McCormack and Sean Cooney stuck to their opposite numbers all night, never leaving them get an inch. Full back James Morris was cool as ice under every ball that was kicked at him.

This was a night for hard rucking and nobody rucks harder than the two Clonmel second rows James Cronin and Liam Ryan.

They put their bodies on the line for their team all night. Nenagh are a strong team and intense pressure saw them force their way over for a try which was converted. This left the score at 12-10.

More pressure from Nenagh gave them a long penalty in the middle of the pitch. As time was nearly up, they kicked. Despite an excellent effort, the kick shaved the outside of the post and Clonmel were off the hook. This was a huge win for Clonmel. Given the conditions, this was a wonderful game of rugby played with wonderful passion and skill by both teams. The Clonmel team play with a large squad and each squad member has made team selection tough for their coaches. They are a credit to their parents and their club. Each squad member has improved their play this season and bright futures lie ahead for this excellent team.

In arctic conditions, Clonmel played uphill in the first half, against a strong well drilled Cobh team, who knew how to play the conditions and the pitch Clonmel defended hard against the Hill and the driving rain and managed to hold out to go in 8 nil down at half time after some immense pressure, With the wind at their backs and playing down the hill, Clonmel played smart tactical rugby, with great work from the forwards, dominating rucks and scrums and gaining hard yard after yard. Some great back plays created space and link work with the forwards resulted in three hard fought tries for Clonmel.

This was a great game of Rugby by two teams who went all out to win this in atrocious conditions, they are a credit to both Clubs.