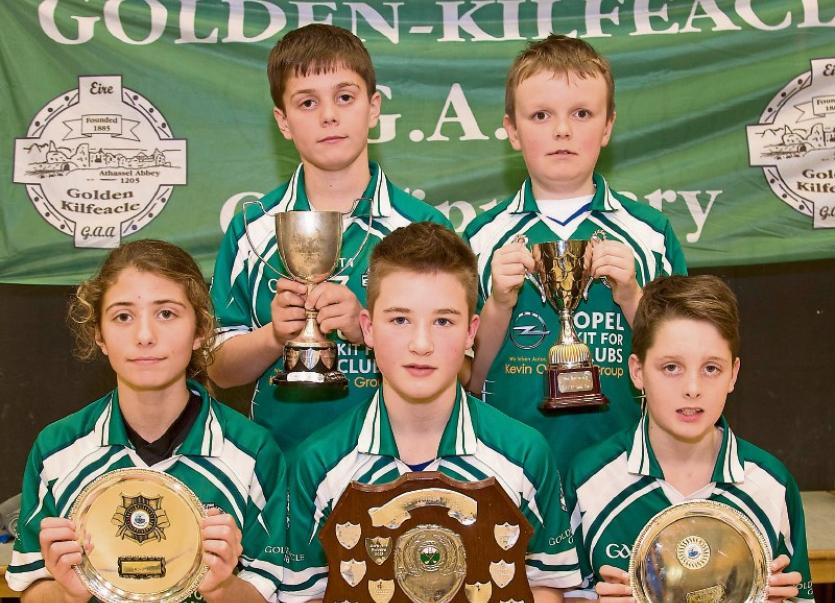 A very special night of celebration was held in Golden recently to mark the achievements of a talented group of young hurlers.

Their exploits on the field this year brought a sixty year wait for a juvenile county hurling title to an end.

The U12 B hurlers were crowned county champions, the first group of club juveniles to win a county title since the U15's won a hurling title sixty years ago.

County star Padraic Maher was on hand to present the medals on a great occasion for the club.,

On Sunday 13th December, special guest Tipperary senior hurler Padraic Maher, presented over 40 of our under 12 boys and girls, with the various medals they had won throughout the year.

2015 was a hugely successful year for this group of players, who won seven trophies in total.

Under12 B Hurling - West and County

Under 12 B Football - West and League

The under 12 B team also won the West football league and championship and were unlucky to lose out to Holycross in the County football semi final.

Both hurling and football teams were coached and trained by Daithi Bargary, John Currivan (Junior) and Seanie O Halloran (Junior).

The under 12 D team won the West hurling championship, with the under 12 E/F and the under 11 teams both winning West titles in football.

Great credir goes to all who look after the juvenile teams and the club is indebted to them for giving up so much of their free time. We would also like to thank the two schools in the parish and their teachers for the great work they are doing. Finally, the success of the past year did not come about overnight. It is testament to the enormous work carried out by all who have mentored this group of players since they started playing at the age of 5 or 6 and we express our gratitude to them too.

We wish all involved continued success in the years ahead.