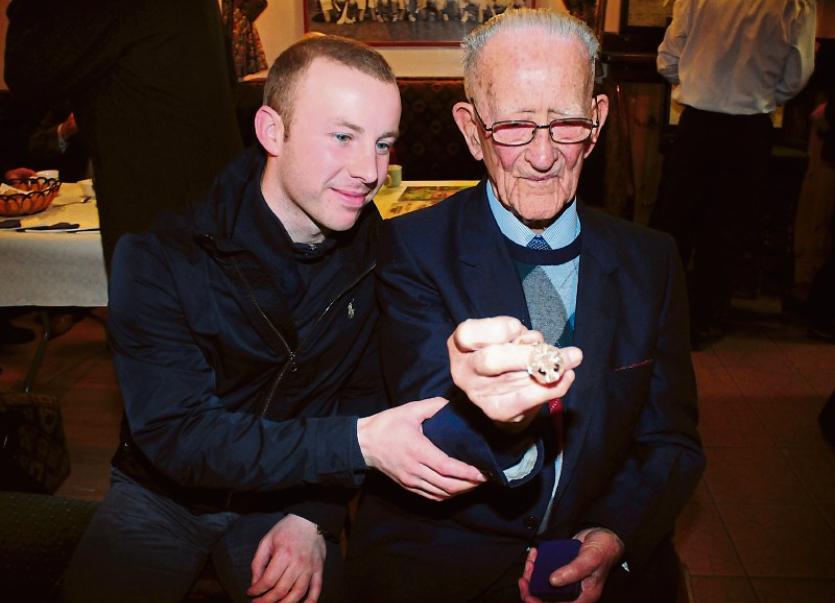 Ask a simple question and you'll get a simple answer.

In last weeks column we were questioning whether Mick Murphy of former Thurles Sarsfields fame was the oldest All-Ireland medal holder in the country, at 97 years of age. He was honoured by the club at a packed very special function in Arus na Sairsealaigh on Saturday afternoon last when many of the greats of the club attended to fete him. But, it turns out he is not the oldest All-Ireland senior hurling medal holder in the country – he is not even the oldest All-Ireland senior medal holder in the county. That distinction, we now think, could fall to 98 year old John Coffey from Boherlahan who is residing in Dublin and is hail and hearty – interestingly John is uncle of 1964 All-Ireland winning senior hurling captain, Michael Murphy – no relation of the 97 year old of the same name. So, a salute to Mick and to John – two great Gaels who wore the county colours with distinction as well as their respective club colours too. If there is an even older medalist out there, tell us.

Speaking of great Gaels, it was sad to hear of the passing of the late Billy Quinn at the weekend, a hurler par excellence, especially in his younger days. He won Croke, Dean Ryan and Harty Cup medals with Thurles CBS and it was poignant to see his contribution in the special commemorative programme produced for Sunday's game in The Ragg – a minute of silence was observed prior to throw-in, in his memory. He had won four-in-a-row mid minor titles with Rahealty from 1950-1953 and the club also won the county title in '53 – a feat of which Billy was hugely proud. He won three Munster and two All-Ireland minor hurling medals with Tipperary also and had the distinction of sharing many of his successes with his brother Dick who was also on some of those teams. While the medal of '51, his first All-Ireland, was obviously a celebrated one, the fact that he was captain in 1953 surely added to the significance of that particular crown – he also played minor football for Tipp in 1953 – no such issues with duality in those days.

Billy will perhaps be remembered most for having scored three goals from full forward in the League Final of '54 when he destroyed no less a man as Diamond Hayden of Kilkenny as Tipp marched to triumph. Billy moved to Faughs in Dublin and won a number of county titles for them, while also togging out in the sky blue colours of the Capitalists – his son Niall would later follow in his footsteps in the Dublin colours, even though most remember him for his exploits as a professional soccer player with a host of English clubs and with the Republic of Ireland side.

Billy and Dick Quinn both played for Loughmore Castleiney in the 1955 senior football championship winning the mid and county crowns, under a gentlemans agreement – they followed up with a second mid title a year later but lost the county final to Commercials. Gentlemans agreements rarely exist now in the GAA, not, presumably, due to a lack of gentlemen, but rather due to a greater tightening of the rules and regulations.

Billy Quinn was a highly respected character who loved life – he particularly enjoyed being back home in Tipperary residing in Ballinure with his wife Mary – a relative of the All-Ireland winning Tipperary captain Tim Condon of Horse and Jockey fame in the last year of the nineteenth century, 1899.

Tipperary has lost a proud son -peace to his gentle soul and sincerest sympathy to the bereaved.

So, Our Lady's of Templemore march on to the semi-final of the Dr Harty Cup following their sound victory over Castletroy Community College. They were by far the better team on the day, but gave away three goals from placed balls which could have cost them. They'll learn from the experience though and can take a lot with them when they fact De la Salle of Waterford in their next outing. Lyndon Fairbrother, Jerry Kelly, Paddy Cadell and Brain McGrath were the eyecatchers while Diarmuid Ryan and Jamie Bergin was also very solid.

Nenagh CBS bowed out to De la Salle – how nice it would have been to have the two Tipp teams squaring off against each other in the semi - Nenagh remember had put Thurles out. De la Salle have had a good run in the Harty in recent times and will not be short on confidence when they clash with Our Lady's. It will be a very interesting semi-final.

Tipp fell by six points to Kerry in the McGrath Cup in Tipperary town on Sunday last – not a bad outcome one would have thought considering the large number of absentees at the moment. So, it's two defeats from two for the footballers who will have their first league game in two weekends time against Limerick in the Gaelic Grounds.

It's doubtful if Liam Kearns will be losing too much sleep over the McGrath Cup results, but he will want a change when that first Allianz outing concludes.

The big attendance at The Ragg for the Tipp senior hurlers clash with a Thurles CBS All-Star team as part of the bi-centennial celebrations was treated to an exhibition game really with conditions playing a major role. Fair play to all who togged out for the match – not an easy proposition considering the underfoot.

The biggest cheer of the day arrived when Ger Redser O'Grady – a distinguished past pupil of the school - swung over a beauty and saluted the warm reception of the patrons.

A few big hits between Padraic Maher and his opponent Patrick Maher, with Brendan and Denis Maher also getting to know each other. Again, as with the previous challenge game against Offaly, no player will be judged on Sunday's clash.

Perhaps things will be better next Sunday when Tipp take on Mary Immaculate College in Boherlahan in aid of Little Flower National School in Ballytarsna. With each passing week, these games become more important as the Dublin game is just around the corner. It's likely that there will be a big attendance in Boherlahan on Sunday, so make sure to get along and see what you can spot in terms of potential. Certainly, Seamus Kennedy did his prospects no harm on Sunday last, with Adrian Ryan and Conor Kenny again proving themselves in front of goals. Micheal Butler too did well while Pa Bourke and John Meagher had tidy games.

Congratulations to the CBS on their hosting of a very worthwhile game – pity the conditions didn't help, but the early switching of the match to The Ragg from Holycross proved justified. The pitch looked to have hosted a gymkhana afterwards – imagine what Holycross, a much wetter pitch, would have been like.

A special commemorative programme was produced for the occasion and is well worth checking out. It is a real collectors item, with great photos and articles, having been produced brilliantly by Editor Ger Corbett and his team.

It's Sarsfields against Cappawhite Treacy's in the U-21 A hurling final of 2015. The Blues go in as favourites after their big Stephen Cahill inspired win over Nenagh Eire Og on Saturday, while Cappa Treacy's defeated Carrick Swans on Sunday having replayed the west final less than 24 hours earlier. So, by the time the final is played, Cappa Treacy's will have played three of their championship games in less than a week. Granted the elements played havoc with this competition, but surely something has to change. The south final won't even be played by the time the county final is done and dusted – it's all a bit ridiculous, is it not?