Youth has its day as Tipperary's top sports are honoured 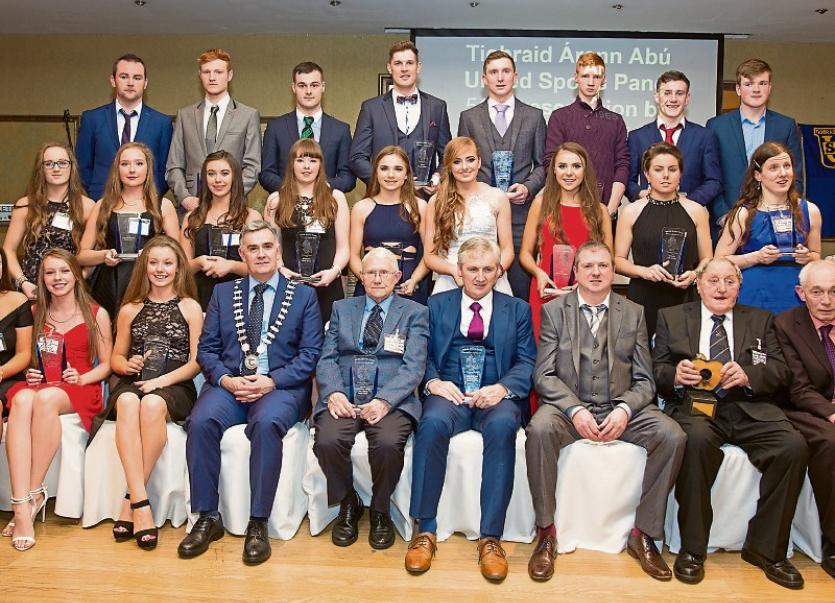 The future of Tipperary sport is in safe hands.

On a night when hurling great Liam Devaney was honoured with the Knocknagow Award, the majority of winners at the Annerville Awards were won by young sportsmen and women.

It represents a clear indication of the work put in at underage level across a huge range of disciplines.

The awards were presented at a gala ceremony in the Clonmel Park Hotel on Saturday attended by 250 people – winners, their families and sports fans in a sports mad county.

The awards have been presented by the United Sports Panel since 1959 – the longest such awards scheme in the country – and sponsored by Bulmers for the last fifty one years.

Company representative Eoin O’Gorman remarked that Bulmers have been in Clonmel for eighty years and for over fifty of those years have been delighted to be associated with the prestigious awards.

“We are a Tipperary company and very happy to be sponsoring these awards. We have a huge range of sporting talent in the county and many are being honoured with awards tonight”, Mr O’Gorman said.

Eighteen awards were presented on the night, representing the diverse range of sporting activity in the county.

The highlight was the presentation of the Knocknagow award to hurling great Liam Devaney. The Borrisoleigh man was one of the game’s outstanding performers during a golden era for Tipperary hurling, winning five senior All Ireland medals, eight Munster, eight National League, two minor All Irelands and three Railway Cups.

The crowd rose as one to celebrate his achievements and to mark his joining a legendary roll of honour as Knocknagow winners.

GAA figured strongly among the awards with Clonmel man Jimmy Collins honoured with the Lifetime Achievement award. The former South Board chairman has been a stalwart of St Mary’s Hurling Club for decades and his input laid the groundwork for the club’s historic County minor success last year.

He has also been very involved with Commercials and it was also a great night for the football side of the Western Road operation with Charlie Mc Geever honoured with the Sean Lyons Sports Executive award for guiding Commercials to its first Munster Club title as well as taking Tipperary minor footballers to the All Ireland final.

Commercials play Ballyboden St. Enda’s in the All Ireland Club semi-final on February 13 and Seamus Kennedy, who helped them to county and provincial honours, received the Gaelic Football award.

The hurling gong for the second successive year went to Seamus Callanan with the Drom/Inch player one of Tipperary’s outstanding performers in the championship, while Clonoulty/Rossmore’s Cait Devane took the camogie award for another brilliant season.

All the other winners will hope to emulate the achievements of the more ‘senior’ recipients as eleven of the categories were won by sportsmen and women in their teens or early twenties.

A coveted Annerville award is early recognition of their achievements to date but surely more success will follow at county and national level.

And one of the biggest cheers of the night was for Special Achievement Award winners Kelly Delaney, Clonmel, and Rachel Ryan, Templemore, who returned home from the Special Olympics Summer Games in Los Angeles with three medals between them.

Sports Panel chairman Davy Hallinan paid tribute to all the winners, especially to the younger ones, and remarked that their achievements are a credit to themselves and their coaches and everyone in Tipperary is proud of them.

And he had a special word of congratulations for the Special Olympians Kelly and Rachel for their medal winning displays in LA.

County Council chairman Seamus Hanafin paid tribute to the work of volunteers in all the sports honoured on the night.

He said sport was not only vital for physical and mental well-being but it also brings communities together and gives a sense and pride of place.

“And when I travel the length and breadth of our county I always see the work of volunteers and the lifeblood of amateur sport is the work they do. They give their time, energy and vision to the sports they are passionate about and I am delighted to see there is a lifetime achievement award to honour such people, Cllr Hanafin stated.

“That’s what makes our county great and it would be a lot poorer were it not for the effort of such volunteers”, he added.

“Tonight we honour the effort and commitment of sportsmen and women to achieve what they have and I wish all the winners more success in the future”, he said.