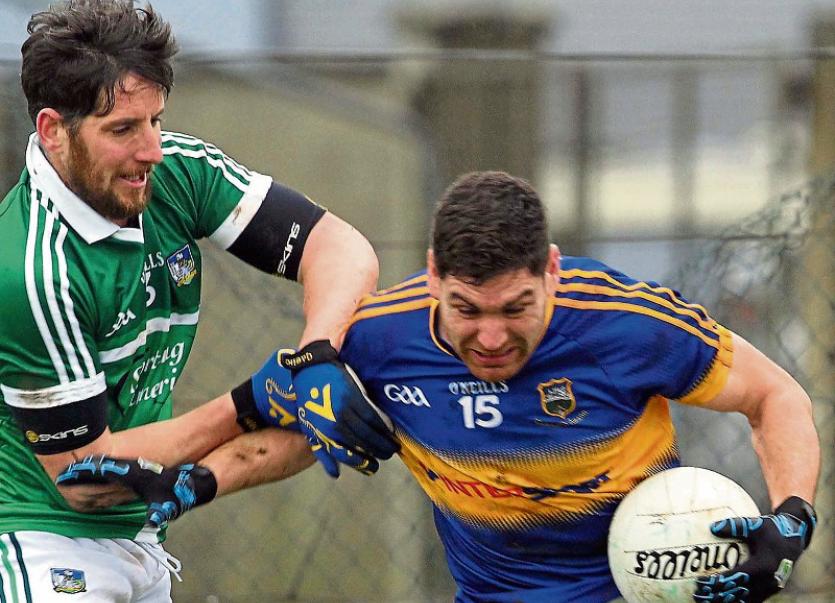 Tipperary earned a valuable point (2-9 to 1-12) away to Limerick at Fitzgerald Park, Kilmallock on Sunday.

Although Liam Kearns’ side were severely hampered by injury and faced an experienced Limerick team this Tipperary outfit warmed the heart with a well-organised and gritty display which featured some neat football.

It is worth mentioning that this battle was fought on atrocious underfoot conditions.

Kilmallock played host to a Dr Harty Cup semi-final on the Saturday previous to this encounter, hardly ideal preparation for a pitch at this time of year. In all the sides shared 49 frees (Tipperary 26, Limerick 23), but the state of the pitch was a major contributing factor.

There was a lot to like about this Tipperary performance, especially in the opening half.

Playing with the wind Tipp streaked into a 1-3 to 0-1 lead, but Limerick clung on to trail by just four at the break (1-6 to 0-5). Limerick improved considerably after the interval and led by three with three minutes to play only for a Josh Keane goal to wrestle the initiative away from the Shannonsiders.

Points from Conor Sweeney and Philip Austin (free) presented Tipperary with an early lead before Limerick wing-back Stephen Cahill responded for the hosts in the 13th minute.

Niall O’Donovan created the room for Peter Acheson to swing over a smashing right-footed effort in the 14th minute before Tipperary struck for the opening goal of the game in the 15th - a Limerick kick-out found the unmarked Josh Keane who set up Peter Acheson for a terrific right-footed finish (1-3 to 0-1); Keane’s marker had been black carded seconds earlier and some sloppy decision making from the 'keeper had cost Limerick dear.

Ian Ryan responded with a converted free for Limerick before a second Conor Sweeney effort left five between them. Ian Ryan (free) and Alan Maloney then traded points before Tipperary created a second goal-scoring opportunity in the 29th minute - Brian Fox won an excellent turnover in the Limerick half of the field before feeding Conor Sweeney, but, unfortunately, the full-forward drilled his shot agonisingly wide.

Two more Ian Ryan frees closed out the half from a Limerick point of view with Tipperary’s Alan Maloney landing the point of the game in the 31st minute following great work from Peter Acheson.

The Tipperary defence had performed admirably in the first half and only permitted Limerick to take two shots at Evan Comerford’s goal. Indeed, Tipperary’s performance deserved a far greater dividend than a four-point interval advantage (1-6 to 0-5).

Limerick improved significantly in the second half with the relocation of Gearóid Hegarty to full-forward making a significant impact. Two Ian Ryan frees during the opening eleven minutes of the second half closed the gap to two.

In the 47th minute a Philip Austin point, following a smartly-taken Conor Sweeney free, left three between the sides, but Limerick added to their tally through Ian Ryan (free) and Seánie Buckley.

Then, in the 57th minute, Limerick happened upon some good fortune when Gearóid Hegarty’s tame effort was deflected onto Evan Comerford’s crossbar and the rebound fell to Peter Nash whose goal helped the home side toward a 1-9 to 1-7 advantage.

A Conor Sweeney free with ten minutes to play left one between them, but Limerick hit back with two superb efforts from Ian Ryan and Seánie Buckley - in the circumstances, with just three minutes to play, a three-point lea (1-11 to 1-8) was as significant as it gets.

We have come to associate a great spirit with this group of Tipperary footballers and they stood tall, once more, in the 33rd minute when Peter Acheson and Jimmy Feehan combined before setting up Josh Keane who rifled his shot into the roof of the Limerick net to tie the game.

Then, in the 70th minute, Kevin O’Halloran won a free which Conor Sweeney converted. With four minutes of injury time signalled Limerick enjoyed some room to carve out an equaliser and the home side managed that feat in the 74th minute when Ian Ryan converted his eighth effort from a placed ball.