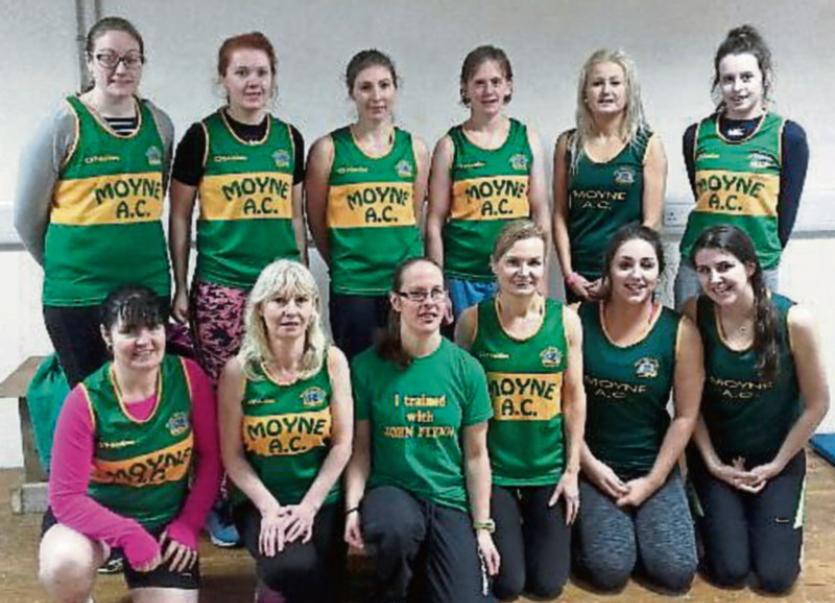 The County Road relays took place last Sunday in Clonoulty Rossmore GAA complex when organised by the host Club, Dundrum. It was a pity that more clubs didn’t support these Championships. The relays consisted of 800m, 1500m, 800m and 3000m for both Women and Men. In the Ladies race we had 5 teams competing with 3 clubs from Moyne and one from the host Club as well as Mooreabbey Milers. The Moyne team of Orla Healy, Kate Harrison, Sarah Healy and Angela Fogarty combined very well to win in 23 mins 47 secs to win the Gold medals in Division One. Then we had the host club team of Jean Kelly, Laura Armstrong, Emily Healy and Linda Grogan running very well when winning the Silver medals in 24 mins 15 secs. In 3rd place we had the Moyne team of Emma Doyle, Ber Spillane, and Brigid Gleeson Susan Fogarty having a great tussle with Mooreabbey Milers and just edging it close to the line when winning the Division One B Gold medals in 25 mins 40 secs. While the Mooreabbey Milers quartet of Patricia Ryan, Martina Moloney Niamh Blackburn, and Marie O'Shea won the Division Two Gold medals in 25 mins 45 secs and are now promoted to Division One. The Moyne 3rd team of Sinead McLoughlin, Aisling Maher, Liz Power, and Sharon Cantwell put in a great combined effort to win the Division Two Silver medals in 30 mins 14 secs.

In the Men’s event we had 9 teams competing with Templemore A C trying to retain their title and they put in a brilliant combined effort when their team of Adrian McGinley, Tony Fogarty, Robbie Kennedy, and Jack Corbett won the Division One Gold medals in 18 mins 49 secs. We then had the Dundrum quartet of Garret McGlinchey, Michael J Ryan, Willie O'Dwyer, and Kevin Moore winning the Division One Silver medals in 19 mins 49 secs. The battle for 3rd place overall went down to the wire as Stuart Moloney put in a brilliant piece of controlled running over the 3000m leg to move his Club, Mooreabbey Milers from last to 3rd overall place and in the process won the Division Two Gold medals in 19 mins 57 secs and they are now promoted to Division One for next year’s event. In 4th place we had the Moyne quartet of Eamonn Troy, Stephen Flanagan, Jack Moore, and Liam Kelly also running very well to win the Division Two Silver medals in 20 mins 21 secs with the Moycarkey Coolcroo team of Paul Bowe, Shane Mullaney, Sean Healy, and Paddy Cummins winning the Division Two Bronze medals in 20 mins 38 secs. The Templemore 2nd team of Adrian Young, Peter Madden, Johnny Doran, and Luke Herke combined very well to win the Division One B Section Gold medals when finishing in 20 mins 46 secs. The Thurles Crokes team of Bill Shanahan Pat Butler, Dean Campion, and Liam Shanahan combined very well to win the Division One Bronze medals in 20 mins 48 secs. Dundrum’s 2nd team of Gerry Hayes, Dermot Hayes, Paudie Coen, and Martin Keane ran very well when winning the Division One B Section Silver medals in 20 mins 49 secs. The Moyne team of Patrick Bowe, Brian Carroll, Paddy Doyle, and Richard Daly ran very well when finishing 4th in Division Two in 22 mins 11 secs. The County Chairman, Billy Purcell, thanks Dundrum for hosting these Championships and he praised Clonoulty Rossmore for their fine facility.

Moyne is the venue on February 14th for the County Women’s 3K and Men’s 6k County Novice Road Championships. The Women’s race will start at 12 noon followed immediately by the Men’s race. Clubs and indeed all athletes intending to run in these and every other County Championship please note that in order to do so, the athletes has to be registered and Club have to register their athletes On Line for the event at Athletics Ireland website. There will be NO entries taken on the Day.