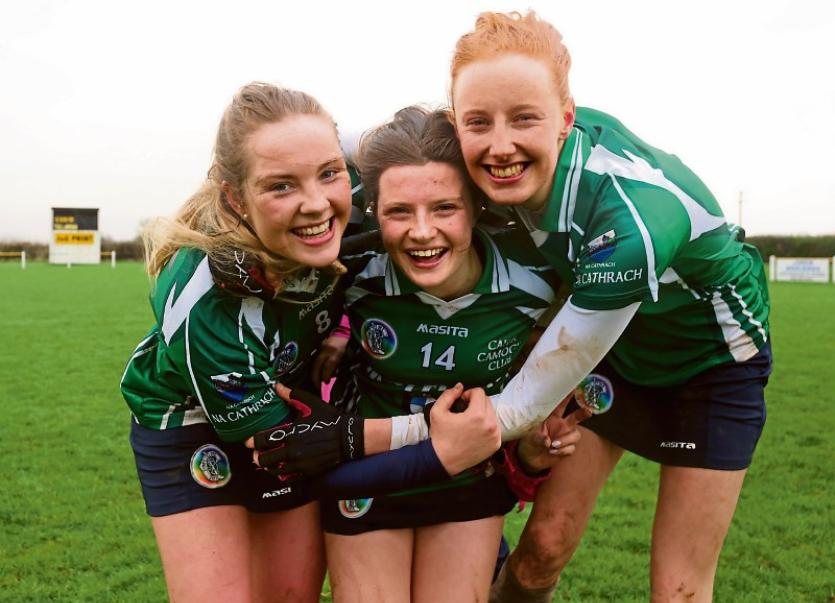 Thats a headline and a scenario few if any of the Cahir contingent who travelled to St Lachtain's Park, Freshford, could have envisaged at half time or particularly one minute after the resumption of play in the second half of last Sunday's All Ireland Intermediate Club Championship against Kilkenny's Tullaroan.

Playing into a strong wind it was the Kilkenny girls who started brighter with their county star Miriam Walsh pointing in the first minute. This was followed up with a good free from Niamh Dowling in the second. Territorially, despite playing into the wind, Tullaroan were dominating in the early exchanges.

Tullaroan finished the half strongly with points from Rachel Buckley and Ella Moore leaving the scoreline level at halftime 0-4 apiece.

It looked like the second half could only belong to Tullaroan as the wind to their backs for the second half was now almost at storm level and their attitude, strength and ability in the first half surpassed that of Cahir.

The second half started as the first had finished with Tullaroan on top and when a speculative long distance shot from Aine Fahey found it's way to the Cahir net inside the first minute, things looked all over for the South Tipp girls.

But out of nowhere came a transformation. Cahir's half time moves began to work. Caoimhe Condon began to revel in the freedom of centre field, Aishling McCarthy began to negate Tullaroan's centre back Aine Fahey, Roisin Howard began to create and weave following her move to the wing, Aishling Moloney returned to her dominant self, Aoife Casey [recently returned from serious injury] began to dominate the square and Carol Casey's move to the wing saw her move up a gear or two.

In defence Cahir's tigresses of Laura Dillon and Lorna McEniry thundered into the game. The tide had turned. First a pointed free from Roisin Howard in the 36th minute had the deficit down to two points before the move of the match involving Carol Casey, McCarthy and Howard saw Lauren Fitzpatrick strike a superb low shot to the corner of the Tullaroan net.

Emma Buckley now had the shackles on Kilkenny senior player Miriam Walsh as Howard increased Cahir's lead to three on the 40th minute.

For the next 15 minutes Tullaroan, with the gale at their backs, exerted considerable pressure on the Cahir defence where they found Eileen Flannery and Aoife Corcoran in top form.

A point by Howard in the 57th minute, following good work by Sinead Kennedy and substitute Aoife O'Donnell [who had replaced the hard working Grainne Quirke], increased the margin to four.

Tullaroan however were not finished. A pointed free from an acute angle on the hour from Danika Sweeney had the difference down to a puck of a ball. Some frantic defending by Cahir in injury time and some smart puck outs from county goalkeeper Orla McEniry saw the Cahir girls get over the line and book their place in Croke Park on March 6 where they face Eyrecourt of Galway.

Eyrecourt will contain a considerable threat in their county senior stars Molly Dunne and Susan Earner.

For Cahir Camogie this is a real Rags to Riches story as the Club was playing Junior B up to 2012. Their second half transformation against a gale was a testament to their spirit, determination and fitness but they will have to improve on their first half effort if they are to emerge victorous in the All Ireland Final.