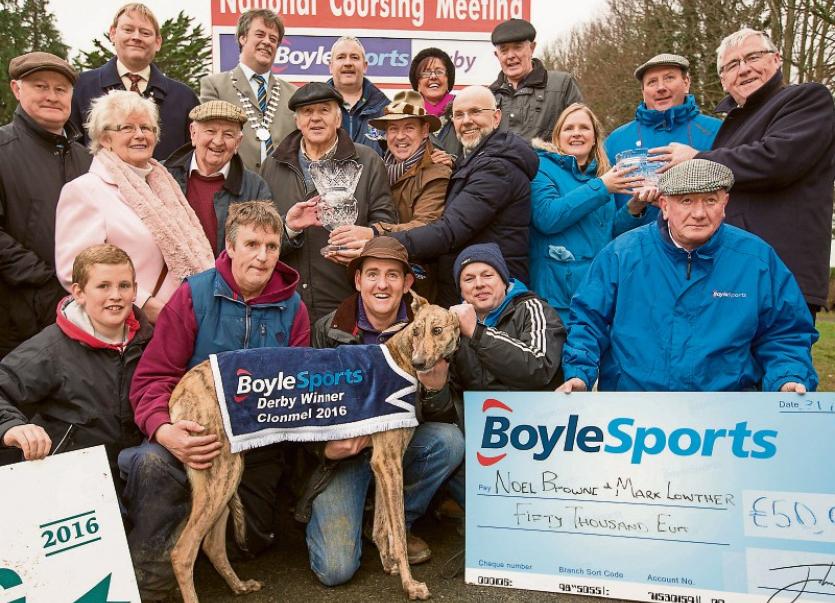 One hundred years after its foundation, the Irish Coursing Club oversaw another successful national meeting in Clonmel at the weekend, with the crowds coming out in their thousands in an air of celebration.

All that was missing was a local winner on Sunday but there were some distinguished performances from dogs owned and trained in Tipperary, particularly in the Horse & Jockey Hotel Oaks which saw two bitches which hadn’t far to travel making it as far as the quarter-finals.

In the end, Clerihan Pockets trained by Paddy Flannery in Clerihan and owned by Declan Byrne from Carrick and Paddy himself lost out in the quarters to the eventual, highly-impressive, winner Graceandglamour from Tarbert in Kerry; while Newinn Rose owned by the No Comment Syndicate and trained by Owen McKenna was defeated by Tilly the Tank.

Meanwhile, the BoyleSports Derby was won out by Coolavanny Bingo, another Kerry-based dog, with Furey Mills taking the runner-up spot.

The Kevin Smith Champion Stakes went to Mulboy King from Dungannon, with the Grace Bruton Champion Bitch Stakes claimed by Tobar na Molt, providing yet another victory for Kerry.

The weather proved largely kind to organisers this year, unlike 2015 when finals day had to be postponed because of frost, with sunshine greeting both Friday and Saturday mornings before things clouded over and while Sunday was “damp,” temperatures weren’t an issue at any stage.

“It’s the first year in my term that the weather was actually perfect for the three days,” ICC chief-executive DJ Histon reflected afterwards. “Every other year we’ve had wind or snow or frost or even fog, but everything just came together, thankfully, and we had a bumper crowd [on Sunday] from all over the country, and different countries as well.”

Clonmel and the surrounding districts enjoyed a bumper weekend too, with many coursing fans staying on and socialising in the hotels, pubs, B&Bs and restaurants.

Attendances for the weekend were still beng tallied this week but Sunday’s crowd was “definitely up on last year, by a long shot,” Mr Histon said.

After a few years of experimentation with the timing of the meeting, going from the traditional mid-week to finishing on a Monday and then finishing on a Sunday, a decision on that aspect of its future will be made by the ICC by the end of this month.

“Whatever we decide at the next meeting, that will be it forever more,” the chief added. “We’ve tried everything and teased it out and I think we had a perfect run on it this year, so we’ll make that decision and announce it straightaway so the hotels and everybody can start to plan for next year.”

The festive atmosphere, which continued at the dog track over the weekend with several successful nights of racing, will come to an end this Thursday (February 4) with horseracing at Powerstown Park starting at 1.25 and featuring the grade three Surehaul Mercedez-Benz Novice Hurdle, won over the last couple of years by Cheltenham Gold Cup fancy Don Poli and also Roi Des Francs who will be on novice chase duty across the water next month.

Among the visitors to Clonmel last weekend is a man who will have several engagements in Cheltenham in March. Making his first appearance at the venue was high-profile trainer Dan Skelton, a former assistant to multiple champion Paul Nicholls, who seemed to be an immediate fan.

“A few friends come regularly so they said, ‘come and join in’. We don’t get the opportunity to do it in England so, why not? I was too young when it was outlawed [in the UK] so it was something I never went to. I knew a lot of people who were involved in it.”

He described coursing as “different” and “a very pure sport,” with any greyhound who successfully went up that testing hill seven times deserving of the status of champion.

Skelton is likely to be a future attendee in Clonmel: “It won’t be my last time anyway,” he said on Sunday.

Also from the horseracing scene, of the flat variety, was Sir Mark Prescott, a veteran of four decades-plus of the national meeting and as big a fan as ever. This year he had an interest in a number of dogs, including entrants that got to the second rounds of both the Derby and Oaks, before being eliminated.

Sir Mark said his first time in Clonmel was in the late 1960s, and “I don’t think I’ve missed one in all that time.” The event is one for his diary every year, he added.

The quality of the hares, as well as the greyhounds in action, was the subject of a lot of comment over the weekend and DJ Histon said it was a welcome element of the meeting.

“It’s our 100-year anniversary so I think the standard and quality and attendance at the meeting reflected that in a good way. It lived up to what coursing is all about.”