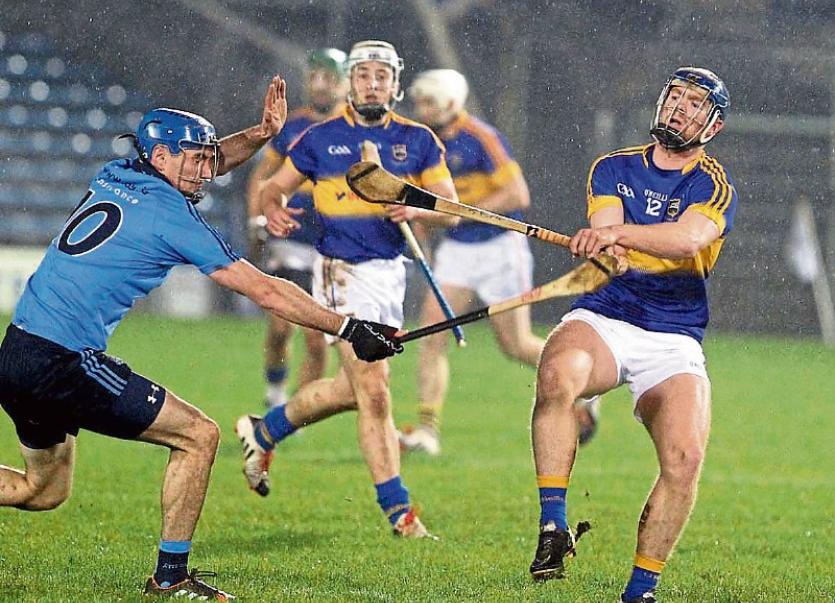 Tosach maith leath na h-oibre was what we were told in school time and again. A good start is half the battle - seems pretty appropriate to use that particular line following Tipperary's sterling display in Semple Stadium on Saturday evening when they disposed of visitors Dublin in pretty impressive fashion.

This was a game that many Tipperary folks were worried about - slightly. Granted Dublin had never beaten Tipperary in Semple Stadium in the league since 1945/46, but they had handed out quite a hiding to The Premier County in the same fixture last year in Parnell Park. Well, the tables turned completely on Saturday night and Dublin were left fumbling in the glare of the floodlights while Tipperary were dancing in the dark, as Springstein might say.

Even the media were given Dublin the pre-game nod for this one. They had captured the Walsh Cup in impression fashion whereas Tipperary's preparations were low key, relatively uncompetitive, and below the radar. Wins over Laois, Mary Immaculate, Offaly and a Thurles CBS All-Star team hadn't set the scene alight, but there were indications that a different approach was in the offing. Those indications were further advanced on Saturday evening when a route one, direct approach was adopted - an approach which totally suited the inclement conditions which greeted the players when they gathered for the clash.

Semple Stadium has rarely been as cut up and that made for difficult conditions for the players. But, it was the Tipp lads who mastered them the better and even allowing for the fifteen wides amassed, it was an impressive performance from Mick Ryan's men.

Tipp were very focused and committed to the job at hand. They looked hungry, eager and willing to fight for every morcel of possession - it was almost championship-like in intensity at times from Tipp as they hunted in packs and did everything in their power to attack the Dublin player in possession, make life as difficult for them as possible, and prevent them from gaining any kind of platform from which to launch their plays.

Dublin played an extra man in defence for much of the game - not a particularly innovative tactic - but that allowed to Tipperary, and James Barry in particular to sweep up and distribute left and right to the two Mahers with ease. Indeed, it also helped to provide an extra element of security to newcomer Thossy Hamill at full back - he had a fine outing and will almost certainly get the nod again for the Nowlan Park gig next Sunday.

Jason Forde showed his abilities in attack - he looked very sharp and hungry, took his goal and points very well and was head and shoulders above the rest on the pitch. Bubbles too looked hungry when he entered the fray while Noel McGrath showed some lovely touches and Conor Kenny bagged 0-3.

All in all, it was a very impressive victory and it will give Tipp much confidence as they head to Kilkenny on Sunday. The Cats of course were beaten by Waterford last Sunday and they will be doing all in their power to get some points on the board now. But, it would be quite a fillip to Tipp to head east and come home with the points. In fact, it would be the dream start for Mick Ryan and his management team who are adopting a no-frills approach presently. After the Kilkenny game, Tipp welcome Waterford to Semple and then there is an away trip to Salthill, before Cork come to Semple again on March 20th - all very competitive games with little enough wiggle room at all. That's why winning on Saturday night last was so important.

Elsewhere the results in the league were pretty noteworthy - Waterford beating Kilkenny and Galway beating Cork. All home teams won out last weekend if that makes any difference. Kilkenny will hardly worry too much, but Corks defeat was pretty emphatic, as emphatic as Dublins in Thurles.

You just have to feel for Clonmel Commercials after they crashed out of the All-Ireland Club championship semi-final, just when it seemed as though they were destined to make history.

They had played so bravely and with such purpose only to be caught at the very end of normal time by a flurry of Ballyboden points to force extra time. Then, they wer e outplayed in that extra time and could have no real complaints about it.

However, they had a golden opportunity and those kind of chances don't come about too often. With 'the Boden' down to fourteen men Commercials should have tied up the game and saw to it that the Dublin lads just couldn't advance their position. Instead, Commercials retreated and invited the opposition onto them. How often have we seen this when an extra man appears - how is it that the team with the extra player can't seem to be able to make it count?

Anyhow, a glorious season for the Clonmel lads came to a shuddering halt in Portlaoise and it means that once again, Tipperary will have little interest in the happenings on St Patrick's Day in Croke Park. Perhaps the only consolation is that Tipp champs in both codes could well have been defeated by the eventual All-Ireland champions. Some consolation? Not much.

It's quite amazing how the Dr Harty Cup continues to capture the imagination of second level hurlers throughout the province. Take a quite look at Templemore this week and you'll see a town and it's surrounding parishes abuzz with anticipation in advance on Saturday's final in MacDonagh Park, Nenagh. Our Lady's take on Ard Scoil Ris in a highly anticipated climax to the age old competition which has seen some of the greats of the game do battle in the hope of getting a Harty medal.

It's 1978 since Our Lady's won the Harty - they still speak about it to this day. But, time has moved on, generations have passed through the gates of the old CBS and now the latest bunch of hurlers have, perhaps the best opportunity since '78, to reunite the silverware with the Cardens town. It would be quite an achievement and it is well within their capabilities.

The team has been labouring somewhat during the course of the season. They have made heavy weather of putting away teams - teams which they were far superior to, if the truth be known. But, they have also shown tremendous flair and courage as they journeyed to the final and their place in the decider in Nenagh is very deserved - they are in with a real shout of creating their own little bit of history.

Our Lady's have key players throughout the field and they will be hoping that the standout guys will do the business on the biggest stage yet. If they perform, Our Lady's will take beating.

Ard Scoil Ris are going for their fourth Harty Cup title in six years -amazingly, their first time being in the final was six years ago. It's quite a record and they too have a very potent side capable of tearing apart opposition if given any latitude at all. Our Lady's will have to keep it tight in defence and cannot afford to have Ard Scoil Ris running at them - midfield will have a big bearing too as the Templemore pair will have to provide cover for the defence and support to the attack in equal measure.

It would be an amazing achievement for Our Lady's to win it. The whole locality wishes them the very best.