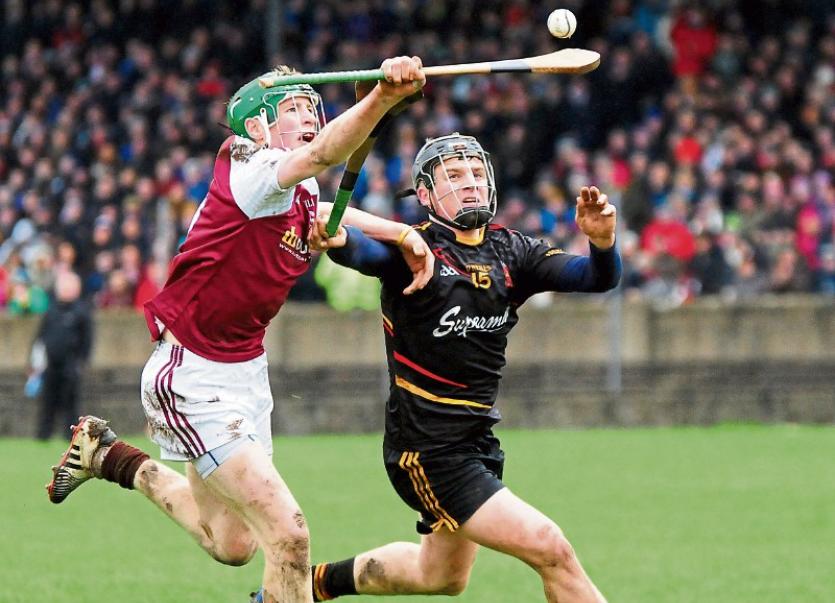 Árdscoil Rís landed their fourth Dr Harty Cup title since 2010 when beating Our Lady’s Templemore with three points to spare (0-11 to 0-8) at a soaking wet MacDonagh Park, Nenagh on Saturday afternoon.

And, although the Our Lady’s lads were left heart-broken at the final whistle there was no shame in defeat for this Templemore team - Tom Byrnes’ men fought to the bitter end.

Árdscoil Rís dug the foundations for this win in the opening half when employing a sweeper, an effective short game and a ferocious work rate to ensure that the Niall Moran-coached side trailed by just two (0-5 to 0-7) at the break having played into a gale. Six unanswered points during the opening seventeen minutes of the second half then propelled Árdscoil Rís into a significant four-point lead, an advantage the Limerick school would ultimately refuse to relinquish.

The athleticism and physical power of this Árdscoil Rís team certainly caught the eye (attendance 3,028), but so did their hurling. In all Our Lady’s could only muster six shots from play (four wides) at the Árdscoil Rís goal. In contrast the 2014 champions lashed over eight points from play while also driving fourteen shots wide.

Additionally, the quality of the Árdscoil Rís tackling was exceptional - there is a difference between hard work and smart work; Árdscoil Rís tackled diligently throughout and certainly had cause to question a series of refereeing decisions.

Árdscoil Rís seized the initiative in the opening minute thanks to a Brian Ryan point from play.

Our Lady’s struggled to settle initially, but got off the mark via a Brian McGrath free in the fifth - the Loughmore-Castleiney man landed that strike from his own 45-yard line. Our Lady’s then took the lead following a Jamie Bergin free while a second long-range free from Brian McGrath helped Templemore into a 0-3 to 0-1 advantage by the 11th minute.

Árdscoil Rís hit back with points which came courtesy of Brian Ryan and Peter Casey to tie the game by the 15th minute (0-3 apiece).

A Jamie Bergin free edged Our Lady’s back in front before Lyndon Fairbrother won a terrific turnover and flashed over a fine point to notch his side’s first effort from play in the 18th minute - 0-5 to 0-3.

A Paul O’Brien free reduced the Our Lady’s lead to one before Árdscoil Rís conjured a terrific goal-scoring opportunity in the 24th minute - Peter Casey and Páraic O’Loughlin combined beautifully to set up David Fitzgerald, but Brian McGrath recovered just in time to block Fitzgerald’s effort.

A long-range Brian McGrath free in the 27th minute forced Our Lady’s two clear and although David Fitzgerald notched another point for Árdscoil Rís a superb individual effort from Kevin Hassett ensured that Templemore had the final say in the opening half - Our Lady's led 0-7 to 0-5.

Considering the prevailing conditions Our Lady’s two-point advantage did not look like nearly enough against such a physically powerful Árdscoil Rís side. Indeed, the Limerick school blasted six points without reply during the opening seventeen minutes of the second half.

Peter Casey set up Paul O’Brien for a smashing point in the 31st minute before a superb long-range free from the stick of O’Brien tied the game in the 35th minute.

Árdscoil Rís scooted into the lead thanks to a Darragh Carroll effort in the 39th minute before points from Paul O’Brien (free), Peter Casey and David Fitzgerald helped the pre-match favourites into a 0-11 to 0-7 advantage with forty-seven minutes played.

Our Lady’s battled gamely on and landed their first point of the second half in the 49th minute when a Jamie Bergin free left three in it.

The Templemore lads tried hard to rescue the situation and probably came closest to doing so when Paddy Caddell dropped in a free in the 59th minute - a ferocious scramble ensued, but the ball was ultimately cleared and Árdscoil Rís were good value for their three-point win.