It's up for grabs still - Liam Kearns

Robbie Kiely in control for Tipp against Westmeath 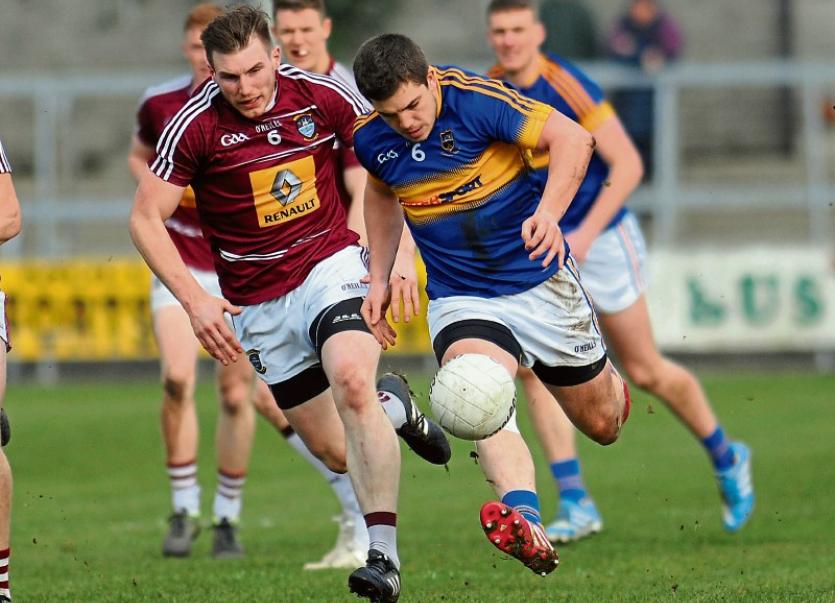 “With draws, half of you is happy and the other half isn’t.”

So said Tipperary senior football manager Liam Kearns after his side maintained their unbeaten record in Division 3 of the National League with a hard-earned draw against Westmeath in Mullingar last Sunday.

The Premier County Bainisteoir reflected: “They took over at the start of the second half and went three points clear. Their tails were up.

“Our guys did great to get back into the game and, from there on, it was tit-for-tat.

“I thought we butchered maybe five or six really good chances in the second half and I thought we didn’t get too many breaks on the refereeing side either. You must win your home games and we are after taking a point on the road. We were two points down just before injury-time, but we got a draw.”

Kearns conceded that it was a poor spectacle overall: “It was a bad game. Both teams were set up defensively and played sweepers with 13 men behind the ball. I was very disappointed with our forward play in the first half. In that first half, we didn’t go at them, but they gave us more in the second half.”

Much of the improvement was down to the 34th-minute double introduction of Ian Fahey and Jason Lonergan, with Kearns opining: “Ian’s strength and Jason’s pace were a big help when we brought them on.”

However, Tipp’s injury woes continue to mount, with Kearns clarifying: “Colm O’Shaughnessy has done his shoulder in, and Ian Fahey has broken his thumb, it looks like. We’re not getting the breaks when it comes to injuries. We were down ten players going into that game, the likes of Kevin O’Halloran, Philip Austin and George Hannigan, who is back training but not ready to tog out.”

Looking ahead, the manager concluded: “We have to go home now and count the bodies.

“A win against Offaly next Sunday would give us six points which is the first target to ensure we stay in the division. We’re at home and we’ve got to get the win, but Offaly had a good win today. Then we can start thinking about promotion. It’s all up for grabs still.”

That game on Sunday will form part of an attractive double header at Semple Stadium when the Tipp hurlers take on Waterford also in the Allianz National Hurling League. And, were the footballers to win, they would certainly be in a strong position. Winning home games is crucail to any campaign and this is not lost on the Tipp players and the management team as they ready themselves for the tie.