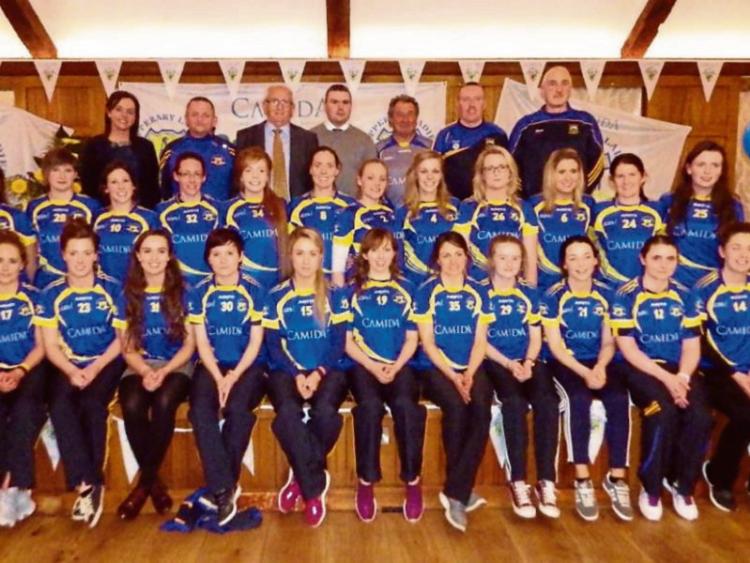 Camida were the hosts and the large attendance was treated to an enjoyable night's proceedings.

Speeches were kept to the minimum with the emphasis placed on the players and the future for this Tipperary Intermediate team under manager Gerry McGill.

David Anchell (Managing Director Camida Ltd) welcomed everyone to the launch and thanked Tipperary Ladies Football for the opportunity to get involved. He gave special mention to his own staff who had arranged all of the proceedings with their usual expertise and attention to detail. Admitting that this involvement is a new venture for Camida he stated he was keen to learn the GAA lingo in the coming years. David thanked team manager Gerry McGill who presented Camida with the opportunity to become involved with the Tipperary intermediate team at a time when the future certainly looks bright.

In 2013 Camida decided to make community involvement more official in order to give back to the local communities. To this end they appointed its first ever community liaison officer and began a partnership agreement with Scoil Ruain, Killenaule which continues to this day. Some of Camida’s employees are past pupils of Scoil Ruain and now have children attending the school. Camida has already sponsored the school’s sports programmes and gives practical advice to students on business setup and associated matters.

Camida has been sourcing specialised chemicals for the life sciences, industrial and ingredient sectors for twenty-eight years, over which time it has developed into one of the most customer-focused and flexible companies in the industry. With over 250 suppliers in more than twenty-five countries, Camida is uniquely equipped to meet the high quality procurement needs of its customers worldwide. With its headquarters in Clonmel it currently has a work force of thirty-two, majority of which are based in Clonmel with other sales offices located in the UK. Camida wholeheartedly believe in and are committed to local community and global community support, interaction and responsibility. Camida also believe it is important to share the success of the company with others and will continue to work towards creating a good will feeling for all others outside the company and its industry.

This association and the new sponsorship agreement with Tipperary Ladies Football will provide Camida with the opportunity to get to know its future workforce in Tipperary and will no doubt generate much goodwill in the community in general.

Gerry McGill, in his address, welcomed David and Camida on board and thanked the Tipperary County Board for their support in his own appointment as manager of the team. He then went on to thank his backroom team for their work so far on behalf of the team -Jim Kilty (strength & conditioning coach), Peter O’Leary (selector), Una O’Brien (admin) and Michael Nash & Richard O’Brien (physical fitness coaches).

Of course Donegal native Gerry McGill is no stranger to county football himself, either as a player or coach/manager and brings excellent expertise and experience to the current Tipperary set-up and team. Gerry coached the senior Dublin ladies for four years culminating in All-Ireland success in 2010. He was previously involved with Laois ladies footballers and Tipperary ladies team in 2013 when they reached the All-Ireland intermediate final. In addition he has much experience with senior college’s football teams winning the O’Connor Cup with UCD on three occasions. He has also been a selector with the Tipperary senior and under-21 football teams.

Jim Kilty is well-known in athletics and GAA circles. Jim has run his own business in the area of strength and conditioning for many years and has coached world class Olympic athletes and many senior GAA teams including the Tipperary hurlers. Many Tipperary GAA coaches and players will have undergone Speed, Agility & Quickness (SAQ) courses, amongst others with Jim in recent times.

Tipperary Ladies Football chairperson Mrs Biddy Ryan then addressed the assembly and stated that they were indeed exciting times for the ladies team who are already doing very well in 2016 having won their last three national league games convincingly. Biddy thanked her county board officials for the hours of voluntary work put in week-in week-out all for the betterment and promotion of Ladies Gaelic Football. She looked forward to the year ahead in anticipation and encouraged the girls to continue apply themselves as a solid unit representing Tipperary on the national stage. The goal, of course, is to get Tipperary ladies back into the senior ranks and to compete successfully at this level, something which is achievable considering the talent coming through at juvenile grades in recent years.

Final speaker on the night was team captain Edel Hanley who thanked Camida for their sponsorship and support. Edel also thanked the management team for their input and stated that it was an absolute pleasure to be involved with this fine group of players and Tipperary set-up. Edel herself has given many years service to the Tipperary ladies and continues to lead the team by her own example on the field of play.

Following all of the speeches the team were presented with a new set of Camida Tipperary jerseys and each player was also given a new bag of training gear courtesy of the sponsors. The jerseys were worn in competitive action on Sunday, March 6th when the ladies travelled to County Down to take on the Down ladies in round five of the LIDL National League.