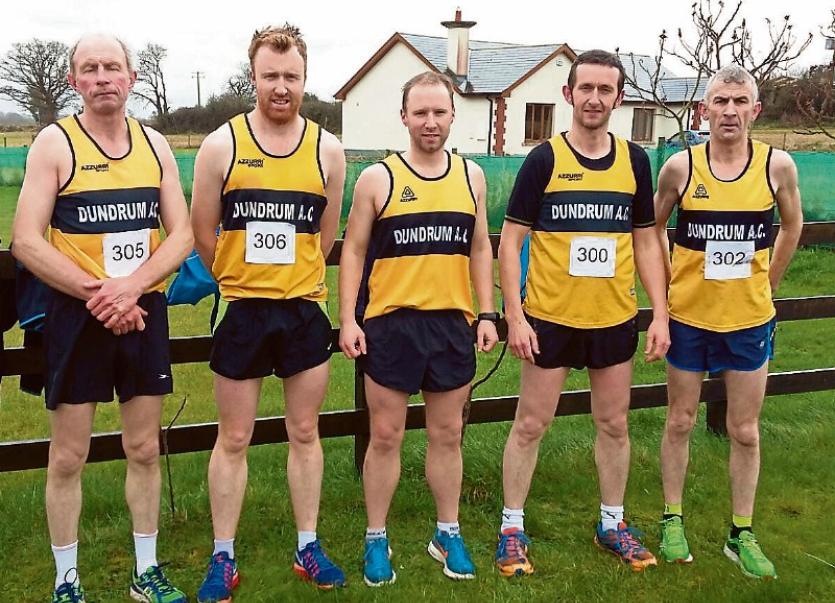 All roads led to Faugheen last Sunday for the County Intermediate Road Championships which attracted good entries for both races. The Women’s race over 4k got proceedings underway and as the athletes came into the village on their last lap Aine Roche (Clonmel AC) led from Tracey Culleton (Ballynonty AC) with a group of athletes that included Phil Ryan (Ballynonty AC), Linda Grogan (Dundrum AC), Anne Marie Boland (Clonmel AC), Angela Fogarty (Moyne AC) and Maire O'Shea (Mooreabbey Milers AC). Then just before halfway Aine made her move when increasing the pace and soon she opened up a lead on the chasing pack and she kept that strong pace going all the way to come home a very convincing winner in 14 mins 54 secs, great running. Then we had a close finish for the remaining podium places with Phil Ryan of Ballynonty AC going clear over the final 200m to win the Silver medal in 15 mins 31 secs with Linda Grogan of Dundrum AC winning the Bronze medal in 15 mins 35 secs. For the record Anne Marie Boland (Clonmel AC) was 4th in 15 mins 45 secs with Angela Fogarty (Moyne AC) 5th in 15 mins 48 secs and Maire O'Shea (Mooreabbey Milers AC) 6th in 15 mins 49 secs. Clonmel AC with two athletes in the top 4 and with Angela Walsh finishing 9th in 16 mins 12 secs were convincing winners. Clonmel AC won the Gold medals and were presented with the John Quirke Perpetual Cup as County Champions, thus retaining their title won last year in Galbally. The Silver Inter Club medals were won by Ballynonty AC team of Phil Ryan, Tracey Culleton 7th in 15 mins 56 secs and Ursula Kiely 14th in 16 mins 56 secs on 23 points just three ahead of Moyne AC who won the Inter Club Bronze medals and their three scoring athletes were Angela Fogarty, Louise Fogarty 10th in 16 mins 18 secs and Kate Harrison 11th in 16 mins 33 secs. Dundrum AC was 4th on 32 points with Mooreabbey Milers 6th on 49 points and Carrick on Suir 8th on 59 points. It was great to see 10 teams representing 6 Clubs in this event.

The Men’s race of 8k was over 2 laps and here Denis Shanahan of Thurles Crokes AC went into the lead very early in the race and as the athletes came into the village for their 2nd lap he was well clear and he kept that pace going to come home a very convincing Champion in 26 mins 21 secs, great running by Denis. Going out on the last lap we had a number of athletes vying for the other podium positions. Midway on the final lap Jimmy Boland of Clonmel AC went clear and he maintained that place to win the Silver medal in 26 mins 51 secs with local athlete Aaron O'Donnell of Carrick on Suir AC winning the Bronze medal in 27 mins 2 secs. Then we had John Fitzgibbon (Thurles Crokes AC) finishing 4th in 27 mins 13 secs and Liam Shanahan (Thurles Crokes AC) 5th in 27 mins 38 secs and Patrick Roche (Carrick on Suir AC) 6th in 27 mins 53 secs. In the Inter Club competition Thurles Crokes were convincing winners of the Dundrum Cup as they had 3 athletes in the top 6 and with Declan Ryan also running very well when finishing 14th in 29 mins 7 secs, they were presented with the Gold medals by County Chairman, Billy Purcell. This was a great team win by Thurles Crokes who were adding this Cup to the County Novice Cup they won in Moyne last month and like Clonmel in the Women’s event they were retaining the Cup won last year in Galbally. The Silver inter Club medals were won by the Clonmel AC quartet of Jimmy Boland, Mark Darmody 7th in 28 mins 6 secs, Lar Martin 16th (29 mins 56 secs) and Conor Fleming 17th (30 mins 4 secs). Only two points separated Dundrum and Carrick on Suir for the Bronze medals with Dundrum coming out on top with their team of Dermot Hayes 9th 28 mins 14 secs, John Shanahan 11th 28 mins 37 secs, Donal Keane 15th in 29 mins 48 secs and Sean McGrath 21st in 30 mins 54 secs on a total of 56 points with Carrick on Suir AC 4th on 58 points.

At the Presentation of Prizes, The County Chairman, Billy Purcell thanked Carrick on Suir AC for promoting two very good races and he also thanked them for the Post race refreshments, he also thanked everyone who helped to make this fixture a great success. At the Presentation of the Prizes Moyne A C presented the County Board with two Cups for the upcoming County Senior Track and Field Championships which will be presented to the Best Club for both the Men’s and Women’s Inter Club competition. Billy Purcell thanked Moyne AC for such a generous gesture.

The County Junior and Senior Road Championships will take place in Dundrum on Sunday 17th April at 12 noon.