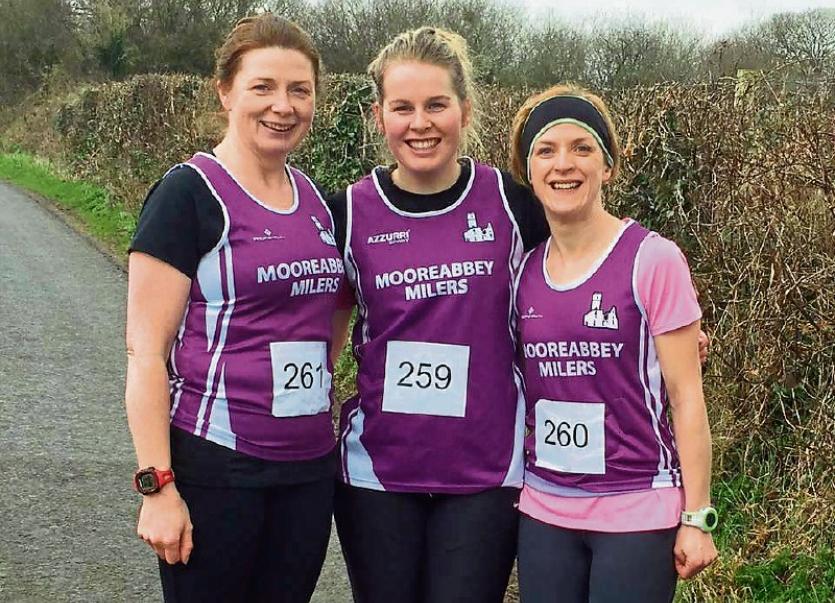 Ballycotton beckoned over 2,500 runners to the seaside village last Sunday 6th. Competition is always fierce to secure a place in this popular ten mile road race.

Runners enjoy the west Cork countryside and views of Ballycotton Bay along the scenic route.

Five members of Mooreabbey Milers AC were lucky enough to take park. Michael "Curley" Cunningham was delighted to finish in just under one hour and yet again received the much sought after "top 100 finisher's" t-shirt.

Michael Cunningham warmed up for the Ballycotton 10 by running the UL Rowing Club 5k last Thursday night and finished in third place. He then ran the Clairsford ParkRun on Saturday morning, taking second place here.

The lady's race was 4k in length. Marie O'Shea came over the line in 6th place for Mooreabbey Milers, followed by Mary Pyke and Louise Casey. Louise joined the club in January of this year and this was her first time competing for the club in a county event. Congratulations Louise. The lady's team was placed sixth overall.

Tom Blackburn was 10th in the men's 8k race, hosted by Carrick-on-Suir AC, with Willie O'Donoghue and Damien Holian running well for the club also. The next county event will be the novice B road championships on Sunday March 20th at 12.00 pm in Coolquill, County Tipperary.

The next installment of the MMRA Sunday League takes place this Sunday 13th. The 10k race will be around the Canon Sheehan Loop in the Glenanaar Woods. This is located around 6k past the mountain bike center in Ardpatrick. There will be a junior and kiddies race at 11.45 am, followed by the adults race at 12.00 pm. See the MMRA Facebook page for more details.

The launch of the Ballyhoura Active Series took place last Friday 4th in Kilmallock. Clubs from the series were well represented. There on the night for Mooreabbey Milers were Tom Blackburn, Damien Holian, Tricia Ryan and Ewan Cunningham. Mooreabbey Milers AC will host a five mile road race as part of this series on Friday, May 13th. Registration for the second annual Cahir Downhill Half Marathon is open through mynextrun.com. This race will be held on Sunday, July 10th.

Tricha Blackburn and her couch to 5k participants gathered in the village of Lisvernane last Sunday morning. They ran a nice 5k route, most of them for the first time. Congratulations to all participants on a great achievement. Tricha Blackburn's classes continue on Monday nights at 7.00 pm in the community field, Galbally.

Mooreabbey Milers' training sessions are open to all who wish to join in. We train every Tuesday and Thursday at 7.00 pm in the community field, Galbally.