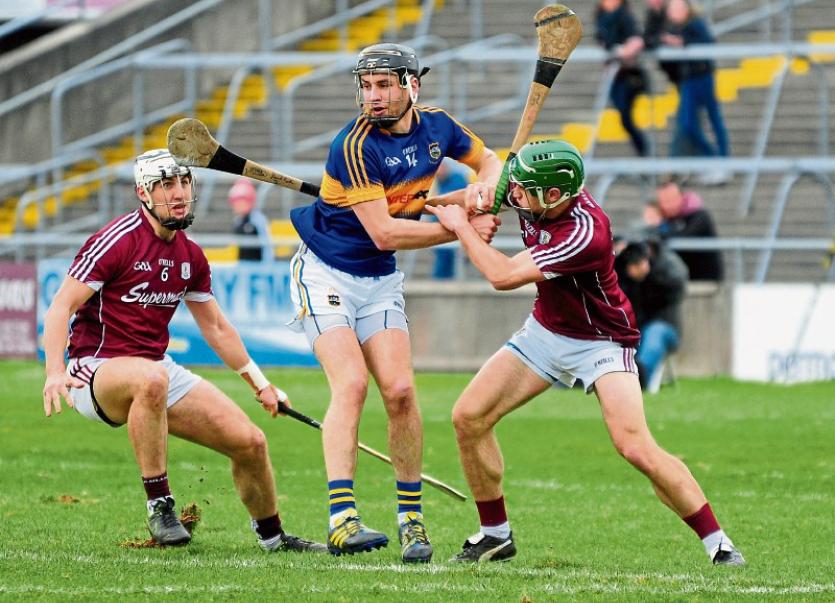 After another epic encounter with Galway it was honours even in Pearse Stadium, Salthill last Sunday, March 13th as John O'Dwyer ensured a deserved share of the spoils for Tipperary in a heart stopping climax to this 1-22 to 2-19 contest. Tipperary showed tremendous character to chisel out this result when it looked as if it was going to be déjà vu for the third time in a row. The experience gained to arrest the slide confirms the assertion of manager Michael Ryan that you learn more from defeat than you do with a win. That said sure we'd take a win every day of the week.

So it's down to the wire and all to play for next Sunday, March 20th as Tipperary welcome Cork to Semple Stadium for the last round fixture in this year's Allianz Hurling League, throw in at 2pm. To guarantee a league quarter-final berth Tipperary need a win and not to be concerned about results elsewhere, while Cork are playing for pride and honour both part and parcel of the tremendous rivalry between two traditional giants of the game.

The history between the sides show that Tipperary and Cork have met each other on 59 occasions in the league with the Rebels holding a slender advantage on 29 wins to 25 for Tipp and there have been 5 draws.

Last year in Páirc Uí Rinn, Tipp carved out a narrow win 2-28 to 4-21 with Kieran Bergin and Jason Forde the goal scorers, while Noel McGrath hit the winning point for Tipp in this thrilling contest, scoring eight points in total, seven of which came from play.

The need of a huge Tipperary support in Semple Stadium cannot be over emphasised, the players and management are and have worked exceptionally hard in the league with as we know only a hair’s breadth between winning and losing. Now more than ever they need and want the county behind them, the call is out, let Tipperary supporters answer the call and give your support to the lads in Blue and Gold in the Field of Legends that is Semple Stadium this weekend. A league quarter final beckons after that who knows, but for now it is one game at a time.

The referee on Sunday will be Paud O'Dwyer from Carlow.

Both stands are open again on Sunday and supporters are requested to get your tickets early in the week for this fixture and to avail of discount prices which will close at midnight on Saturday night. Ticket prices as follows; Pre-Purchase Price: Adult: €10 (Pre-Purchase discount ends midnight on the day before the fixture). Match-Day Price: Adult: €15, juveniles under 16: free of charge.

The Tipperary footballers travelled to Longford looking for a win to keep promotion hopes alive in the Allianz Football League Roinn 3 round 5 match also last Sunday, but met strong resistance from the home side in the second half and had to come home suffering their first loss of the campaign on a score of 1-17 to 1-11 to Longford. Tipperary's goal came early in the second half from Jason Lonergan but a strong run saw Longford home.

Combined with losses for Kildare and Clare, it makes for an extremely tight finish to the league. Kildare are still two points ahead on eight points, while Tipperary and Clare have now been joined by Longford and Offaly on six points. Tipperary's home match against Kildare on Easter weekend has taken on even greater significance now as any of the five could claim first and second spot. Sligo away from home will be no easy task either considering their victory over Kildare on Sunday to throw the league wide open.

Unfortunately the Tipperary U21 footballers were relieved of their Munster crown by Kerry in the EirGrid GAA Football Munster Quarter-Final in Austin Stack Park, Tralee last Wednesday night, March 9th with the home side edging it by the slenderest of margins, Kerry 0-11 Tipperary 1-07, with Liam Casey the Tipperary goal scorer. Commiserations to all the players and management following their efforts as their interest in this championship have now ended for another year.

Best wishes to our referees taking charge of final league round games on Sunday; Fergal Horgan (Knockavilla Kickhams) takes charge of the Allianz Hurling League Roinn 1B decider between Clare and Limerick in Cusack Park, Ennis while Johnny Ryan (Boherlahan-Dualla) is in the middle when Carlow and Westmeath meet in Round 5of the Allianz Hurling League Roinn 2A fixture at Netwatch Cullen Park.

There were four games played last weekend the County Senior Hurling Challenge Cup resulting in comfortable victories for the winning clubs. Two ties were all North affairs with Kiladangan having too much for Silvermines in Dolla on Saturday. On Sunday then Burgess had plenty to spare over Ballina in Kilcolman as did Moyne-Templetuohy in their victory over Lorrha-Dorrha in Lorrha. The other game played was the only one without a goal as Drom & Inch travelling away got the better of Moneygall.

The next round of matches take place this week, for times, venues and a full round up of all fixtures and results across the Premier County please view the county website at http://tipperary.gaa.ie.

Commiserations to Our Lady’s Templemore whose run the All-Ireland Post Primary Schools Croke Cup (Senior Hurling “A”) competition came to an end last Saturday, March 12th, in Clonmel as St. Kieran’s College, Kilkenny booked their place in the final following their 2-16 to 0-13 win in the semi-final. St. Kieran's will now play Ardscoil Ris of Limerick in the Croke Cup Final.

Congratulations to Abbey CBS who defeated Colaiste Mhuire, Johnstown in the Masita GAA All-Ireland Post Primary Schools Senior 'B' Hurling Paddy Buggy Cup Semi-Final in Cashel last Friday on a score line of Abbey CBS 2-07 Johnstown 0-12. The Abbey now go on to meet St. Louis GS, Ballymena in the final on Easter Monday in Semple Stadium Thurles. This game will act as the curtain-raiser to the aforementioned Croke Cup Final in what is an attractive hurling double-header.

This June, the Féile na nGael tournament comprising of hurling, camogie and handball will take place in Tipperary and Waterford. Following the inception of Féile na nGael in 1971 when hosted by Tipperary, this tournament has gone from strength to strength with over 6,000 boys and girls under the age of 14 taking part each summer.

The 2016 Féile na nGael tournament will take place from Friday June 17th to Sunday June 19th and a number of clubs in Tipperary and Waterford will be given the task of hosting visiting teams as part of the Féile weekend. Such arrangements have been commonplace for years and tight bonds between clubs and individual families have been the legacy of this great tournament since its inception

Preparations are at an advanced stage with a Féile organising committee led by Chairman Donal Shanahan (Tipperary) and Secretary Patricia Walsh (Waterford) working to ensure the weekend is organised professionally and thus ensuring maximum enjoyment for the clubs, mentors, officials, parents and most importantly the children involved.

Participating clubs should note that a Club Information Night is scheduled for the Clonmel Park Hotel on Wednesday March 30th at 8pm where clubs will get further details of what will be involved in addition to being informed of the counties each club will be hosting this June.

It was with regret on Sunday that we have learned of the death of Aidan Farrell, Gallonreagh, Maudabawn, Cootehill, Cavan, father of Uachtarán CLG, Aogán Ó Fearghail. Tipperary County Board on its own behalf and that of our supporters extends its deepest sympathy to Aogán, his mother, brothers and extended family at this sad time following the death of Aidan. Ar dheis Dé go raibh a anam uasal.

The South Tipp GAA Centre in Clonmel will hold a memorabilia fair for all sports this Saturday March 19th in the G.A.A Centre from 12 noon until 4pm. All the proceeds will go towards the G.AA Centre funds.

Clubs or individuals in clubs who may have G.A.A memorabilia, books, match programmes etc. that they wish to dispose of and will donate to the Centre are kindly asked to contact any member of the Centre committee, alternatively donations of material for sale can be left into the Centre from 7.30pm onwards Wednesday to Saturday.Those who wish to host their own table at that event and present their own material for sale are welcome to do so. Tables can be booked at a €10 fee by contacting the Centre on 052-6121806 or per the following; Seάn Nugent 087-2669304 and Noel Byrne 086-8076080.

Nenagh Éire Óg Healthy Club Project is hosting a health and well-being night in the Abbey Court Hotel on Wednesday March 23rd next at 7.30pm. A talk entitled "Minding the body, minding the mind" will be given by Dr. Fergus Heffernan, PhD who is a renowned psychologist and psychotherapist and a leading educator in the area of stress management and how it relates to our mental health. Adm. €5.00 and all are welcome.

Perhaps an area of interest to supporters and collectors is the recent information bulletin from Alan Aherne called 'Programme Plus'.

It is a bulletin aimed primarily for GAA programme collectors but also caters for yearbooks, annuals, magazines, histories, etc.

Anyone wishing to be find out more can contact Alan at alanahernesars@gmail.com.

Supporters can join on line on www.tippsupportersclub.com by credit card or debit/laser card. Also on the website details are available of the direct debit facility; as the Club is run on a completely voluntary basis it would be a great help if members could join by direct debit. If joining by post please send a cheque or postal order payable to Tipperary Supporters Club to Jim Reidy, 13 Castleknock Close, Dublin 15 or 086-3580718, email: info@tippsupportersclub.com.

Information concerning all areas in the GAA will appear in this section in the future. If you wish to include any item of interest in future articles, please e-mail at pro.tipperary@gaa.ie on or before 3.00pm on Monday. Visit the Tipperary GAA web site at http://tipperary.gaa.ie to keep up to date with all the latest news in Tipperary GAA circles.