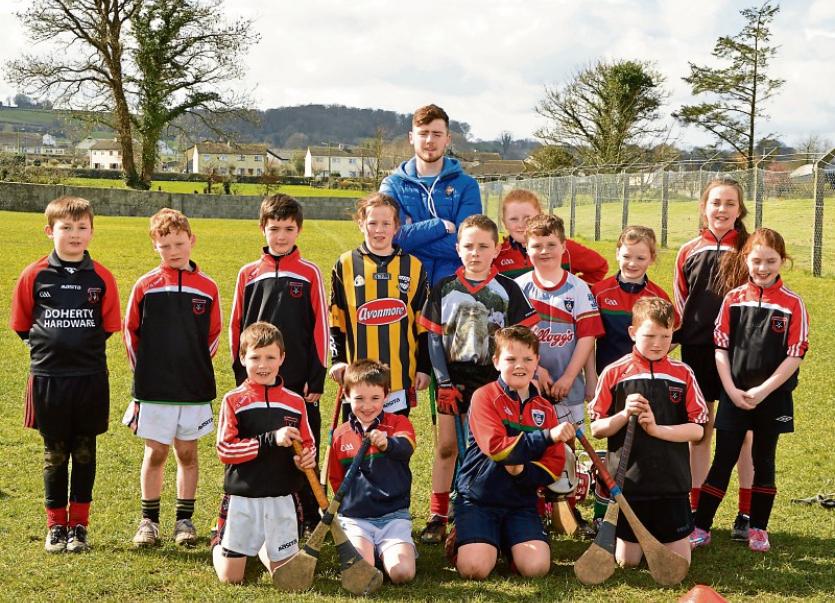 Last Saturday the hurling action was hosted by the Toomevara club staging the U15 Inter Divisional Hurling tournament in honour of Roger Ryan of Tipperary senior hurling fame.

The weather conditions had played havoc with the cancelation of the U14 Tournament which was planed for a morning start in BorrisIlleigh. In Toomevara the rain continuously made a presence but full credit to all the divisions it did not deter them from putting on some great passages of hurling.

The round robin format prevailed and all games were fifteen minutes aside. The opening games commenced @ 2pm with two games going on Pitch 1 the North defending champions played the West with the west men raising a green flag courtesy of Aaron Moloney after four minutes. However that was to prove to be the only west addition to the score record during the first half. The north on the other hand had two points from play by Ciarán Grace and three from frees by Gavin Meagher to go two points up 0-5 to 1-0 at the interval. After the restart both sides just added a single point apiece to leave the full-time score reading North 0-6 West 1-1.

In the other game scores were scarce with the South holding a half time advantage 0-2 to 0-1. In the second period the south added a further 2-01 to win the encounter on a concluding score line 2-3 to 1-1.

The second round of games commenced @ 3pm - the west and mid shared the spoils at the interval at one point apiece. The west held their opponents scoreless during the entire second half while adding 1-1 for a concluding score 1-2 to 0-1.

In the north and south contest it was to be a one point advantage at half time on a score of 1-0 to 0-2. In the second period the west clocked up three points while the south added four to put the sides’ level at full time, West 1-3 South 0-6.

The final round of were games were at 4pm. The north had a score of 1-2 while conceding a single point against the mid. In the second period the mid upped their game scoring 1-3, however victory went to the north with a one point margin on a concluding score of north 1-5 mid 1-4.

In the other contest the south held the west scoreless during the first period while clocking up four points, two from play by Christy English accompanied by two from frees by Ciarán O’Dwyer.

In the second half the west came to life narrowing the deficit to two points, but the south responded with two points. The west to their credit really gave it everything but as the clock ticked time up victory went to the south on a final score of South 0-6 West 0-4.

As both the south and north ended level on points with a draw and two victories it was down to least scores conceded which gave the advantage to the south to claim the title they had last won in 2014.

Prior to the presentation chairman Tom Dawson praised all the teams for the quality of hurling despite the very adverse conditions and added it was a fitting tribute to the memory to the late Roger Ryan. He thanked all involved at the Toomevara club and especially the ladies who provided much appreciated warm refreshments. Dermot Ryan son of the late Roger presented the Roger Ryan Memorial Cup to south victorious captain Oisin Brennan.

Féile na Gael: A club information meeting took place in the New Park Hotel, Clonmel on Wednesday 31st. A large number of the participating clubs from Tipperary and Waterford were represented. Tipperary Féile chairman Donie Shanahan welcomed everyone before introducing Croke Park Féile officers Chairman Martin Skelly, Secretary Peter Horgan and committee member Pádraig Lahóg. Donie then went briefly through what the meeting agenda entailed. He said that while there is a lot done much more has to follow in order that this year’s tournament is a success. He acknowledged the effort thus far by all concerned. He also informed the name of this year’s sponsor which is John West. Martin Skelly in his address thanked both Tipperary and Waterford for the effort put in so far and added that he had no doubt that the four hundred and fifty games would go well with one hundred twenty host clubs from within the two counties being joined by an equal number of visiting clubs. Eoin Breathnach had a PowerPoint presentation detailing what was to be expected from all the participants. On its completion an opportunity was given to the audience to have any queries answered. Then it was on to revealing the draw for the games which are taking place on the weekend of June 17th, 18th &19th. More on the draw can be viewed on the Tipperary website. The official launch of this year’s Féile is taking place in Ballymacbury on Thursday April 21st @ 7.30pm.