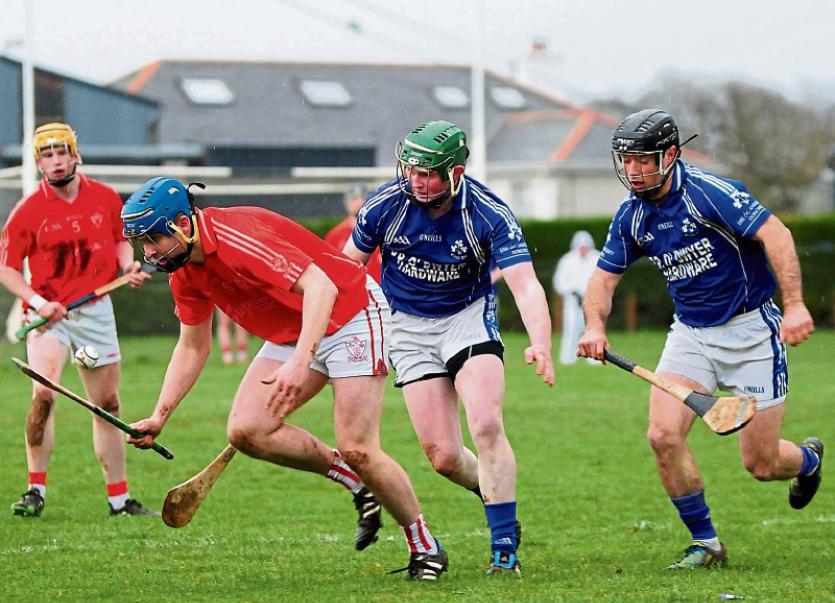 It was to have been one of the busiest weekends in the local GAA calendar. But, the Gods intervened and Sunday was more-or-less written off apart from a few games in the Clean Ireland Recycling county senior hurling championship.

Best made plans are often scuppered for a variety of reasons, and it's amazing to think that the county championship is already on the backfoot, even at this early stage - the middle of April and already we are facing the prospect of having to catch up.

In fairness to the CCC, they had a few hard calls to make over the course of Sunday and most people would agree that they made the right decisions - apart from the fact that they would have had nobody at the games, to play matches in conditions such as were experienced throughout the county on Sunday would have been to show scant regard for the players, the mentors and the clubs.

So, a clap on the back to the Board for postponing the majority. But, of cours e afew did get the nod to continue and on they went.

The Saturday evening matches didn't have to contend with the same level of downpour as Sunday affairs, but even still it was cold and miserable for a few of those.

Perhaps the biggest game of the weekend, thanks to the postponements, ended up being the clash of last years county finalists Nenagh Eire Og, and North champions Kildangan in Newport. The north champions won out with thirteen men - they had Darragh Egan and Martin Minahan dismissed on second yellow cards within a few minutes of each other and ended up playing the last 15 minutes, including five minutes of injury time, with just 13.

Nenagh Éire Óg will be disappointed with the performance and will have to win their remaining games in the group against fellow northerners Templederry - last years divisional runner-up, and Mullinahone, last years south champions - if they are to emerge from the very competitive group.

In the other games, as expected, Loughmore Castleiney saw off Borrisokane in Moneygall and look to be in good shape at this stage of the season - theirs is a three team group and they would be expected to overcome Knockavilla Kickhams too when they lock horns; Eire Og Anacarthy had a narrow victory over Roscrea - deputy county keeper Mooney saving a penalty in the first half which proved crucial in the end result; Moyne Templetuohy drew with Burgess in the battle of the green and gold - an important point secured for the mid men who have Toomevara and Holycross Ballycahill in their group for company; and in Holycross, Killenaule had it all their own way against a disappointing JK Brackens, for whom Eamon Corcoran continues to be the main man despite the mileage on those ageing legs. Drom-Inch and Upperchurch Drombane make up this group but their game was one of the ones which fell foul of the weather.

The two games which did go ahead on Sunday were both in the north of the county with Ballina taking on Silvermines in Nenagh and emerging with victory - the focus was firmly on Jason Forde and Michael Breen in this one, with both county men doing very well, despite the conditions; while Clonoulty Rossmore came good against a fancied Kilruane MacDonagh to score an important three point victory. Neither Brian, nor Niall O'Meara lined out from the start for Kilruane MacDonagh with Niall coming on to try and save the day, but to no avail. Perhaps this could be the year for Clonoulty Rossmore to progress having had a few disappointing seasons - they have Donagh O'Donnell back at the helm and he is making a big impression there.

So, the fixtures crux kicks in early this season. Football is on the agenda for next weekend and the second round of the championship was due to take place the weekend after. Some of the postponed games would not be affected by the football championship, but with the likes of Drom-Inch, Upperchurch Drombane, Moyne Templetuohy, Eire Og Anacarthy, JK Brackens and Loughmore Castleiney all featuring as dual clubs, the complications continue to grow and grow for CCC. No doubt they will figure it out - they have no choice at this stage really.

Tipperary folks will look on with much interest at events in Semple Stadium on Sunday afternoon next when the Allianz National Hurling League semi-finals are scheduled to take place.

Kilkenny will take on a resurgent Clare who defeated The Premier County in the quarter final tie at Cusack Park, Ennis just last week, while Waterford will have to contend with Limerick in the second semi-final. Expect to see a final featuring Kilkenny and Waterford and this will more than likely be in Semple on Bank Holiday weekend.

It will be interesting to see how Clare fare out against The Cats. Both sides like playing in Thurles and it should be a very full-on battle Brian Cody's men to emerge as winners. But, The Banner are coming and victory would be more significant for them than it would for Kilkenny.

It's hard to see Limerick being able for Waterford in the second game either.