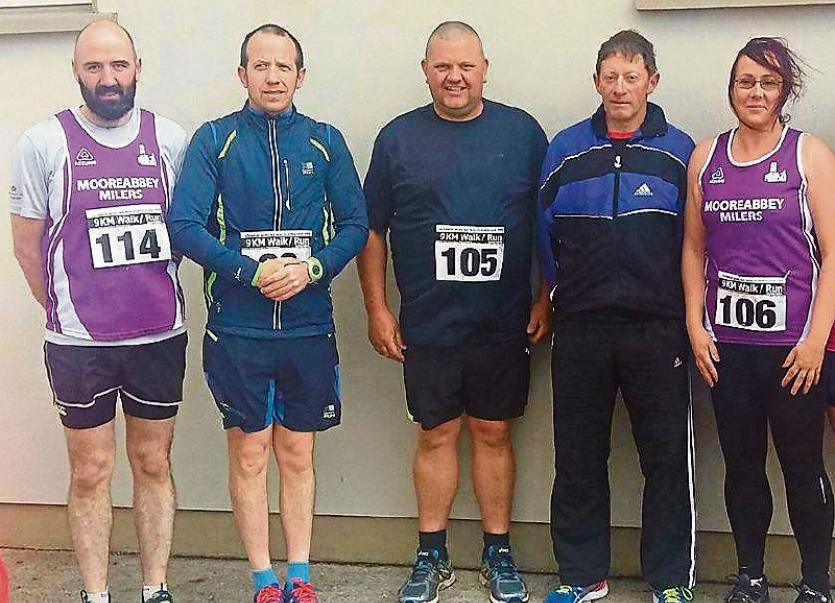 What a magnificent May Bank Holiday weekend it was for Mooreabbey Milers AC. Club members took part in races of varied distances on the roads and trails over the long weekend. The popular Morrison BMW Cahir Run4Fun took place last Wednesday evening, 27th. The event raised funds for a mini bus for the local day care centre. Kieran Lees crossed the line in third place in just over 22 minutes. Ewan Cunningham was the second junior. Well done also to Mary Pyke. Martina Moloney took part in the Ballygiblin 5k on Friday night. This was hosted by Galtee Runners AC.

Saturday April 30th was a day to remember on the Ballyhoura hills for almost 200 runners. The Munster Mountain Running Association hosted the Ballyhoura Trail Marathon from Kilfinane along quiet country roads, scenic trails and unforgiving hills. This event included an ultra, full and half marathon and was the first in the MMRA Long Distance Challenge. Three club members competed in the marathon. Tom Blackburn was third in a time of 3.50, followed by Damien Holian in 11th and Robert Cunningham in 16th place. Ger Griffin ran an excellent half marathon, coming over the line in 9th place after 1 hour 56 minutes of running. Brendan Houlihan finished in just over two hours followed by Marie O'Shea, John Hayes, Paddy O'Shea, Mary Pyke, Mandy Parslow and Honor Hayes. Congratulations to all the Mooreabbey Milers who took part and well done to those from the club who gave up their time to volunteer on the day.

The Great Limerick Run attracted thousands of runners to the city of Limerick on Sunday May 1st. Among them were some Mooreabbey Milers including Ann Coughlan who recorded a PB in the 6 mile race of 46.45, Morgan McGrath, Sheila McGrath and Michelle Carey. Congratulations to all.

Mooreabbey Milers AC will be supporting the Dundrum AC 5k this week, which is in memory of the late Brendan Kinane. Race four of the Doneraile 5k series will take place on Saturday 7th at 11 am. The Galbally Playground committee will host a 5k fun run/walk from the village on Sunday 8th at 1.00 pm. Registration fee is just €5 and all money raised will go towards building a playground in Galbally. Refreshments and prizes will be in the community centre afterwards.

The Mooreabbey Milers AC 5 mile road race will take place on Friday May 13th at 8.00 pm in Galbally. Registration fee is €12 and runners will be chip timed. The walk will begin at 7.30pm and cost €5, a family of three or more walkers costs €15. There will be prizes and refreshments in the community centre afterwards. This race is part of the Ballyhoura Active Series. The first fifty people to register for the race will receive a free gift from Ballyhoura Active.

Training takes place every Tuesday and Thursday at 7.00 pm in the community field in Galbally. All are welcome to join us.