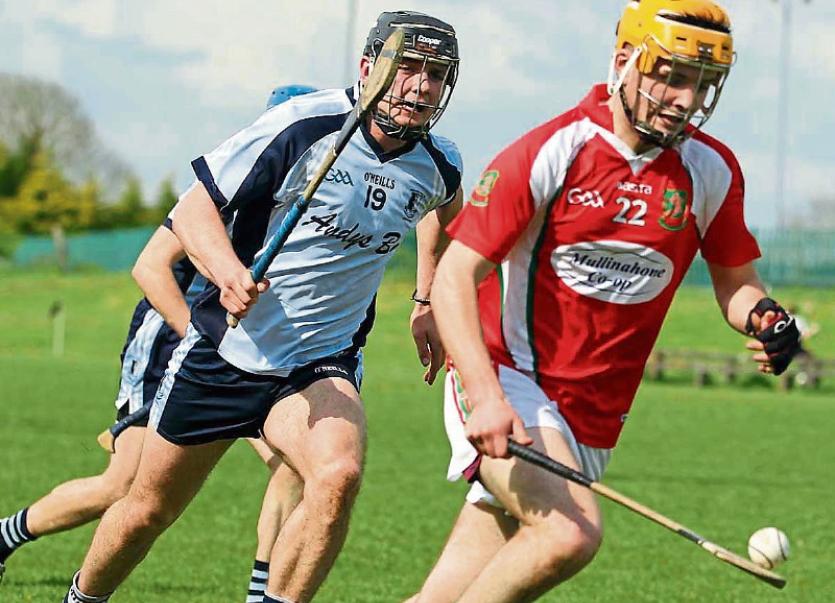 A last minute John 'Bubbles' O’Dwyer goal earned Killenaule a share of the spoils in a fascinating tussle with Drom/Inch at Boherlahan last Sunday afternoon.

It meant a second successive draw for both sides in Group 1, with Killenaule the more satisfied, this hard earned point ensuring their passage into the knockout stages.

The team sheet showed no changes to the Killenaule starting 15 from their previous outing against Upperchurch Drombane while Drom/Inch brought in Jamie Bergin and Tommy Nolan for Michael Butler and Shane Hassett, from their opening day encounter with JK Brackens. Interesting line ups, with so much talent on show, and the main event certainly lived up to the cast list.

Killenaule trailed by eight points with just 10 minutes remaining but in an incredible finale O’Dwyer scored 2-2 to snatch a precious draw.

The opening stages were dominated by Drom/Inch as they registered four points without reply in the first six minutes. James Woodlock the pick of the scores, firing over after Jonathon Gleeson had saved an early goal chance.

Killenaule’s response though was emphatic. O’Dwyer won possession 40 metres out and he drove at the Drom’s defence at pace, before laying off to Kieran Bergin who smashed his shot to the corner of Damien Young’s net.

Woodlock notched his second score of the game for Drom/Inch and Callanan registered too, pointing a free from the 65 metre line. Points from O’Dwyer and Michael Doyle kept Killenaule in touch, but the Drom lead was increased again in a devastating three minute spell.

In the 13th minute Woodlock found the net to move his side four in front and when Callanan added a second goal soon after the lead was eight. Tommy Nolan scoring a point in between.

The sides shared six points between them before the break but the most crucial score of the half came in the 20th minute. Tony Doyle did exceptionally well to find Eoin Barry and the young Killenaule man showed great composure, finding the net, to keep his side in a game that had been threatening to get away from them.

The goal though may have been scant consolation had Drom/Inch converted more of their first half opportunities, no doubt disappointed to hit nine wides in the opening period.

And Barry made them pay again when he also registered the last score of the half to reduce Drom’s lead to five at the break, Killenaule 2-5 Drom/Inch 2-10.

In a tactical change at the beginning of the second half Killenaule’s John O’Dwyer was moved to a sweeper position and he added two early points to the scoreboard.

Kieran Bergin scored his first point of the game to add to his early goal but scores from Enda Walsh, Mikey Connors and Seamus Callanan kept Killenaule at bay.

The Drom lead was stretched again on 44 minutes when David Collins scored his first point and the signs were ominous when Drom hit another four, a pointed free from O’Dwyer, Killenaule’s only response. In a final throw of the dice Killenaule moved O’Dwyer to the full forward line and it had a devastating effect.

Almost immediately O’Dwyer raised a green flag, Declan Fanning instrumental in the build up, and Tony Doyle fired over another score from distance to reduce the deficit to four.

A free from O’Dwyer meant there was just one score separating the sides in the final minute. With time almost up O’Dwyer traded passes with Niall O’Dwyer and there was an inevitability about the resulting finish ever before he blasted home to draw the sides level. There was time for one last piece of action before Pat Gibson blew the final whistle but O’Dwyer’s effort from a tight angle sailed wide.