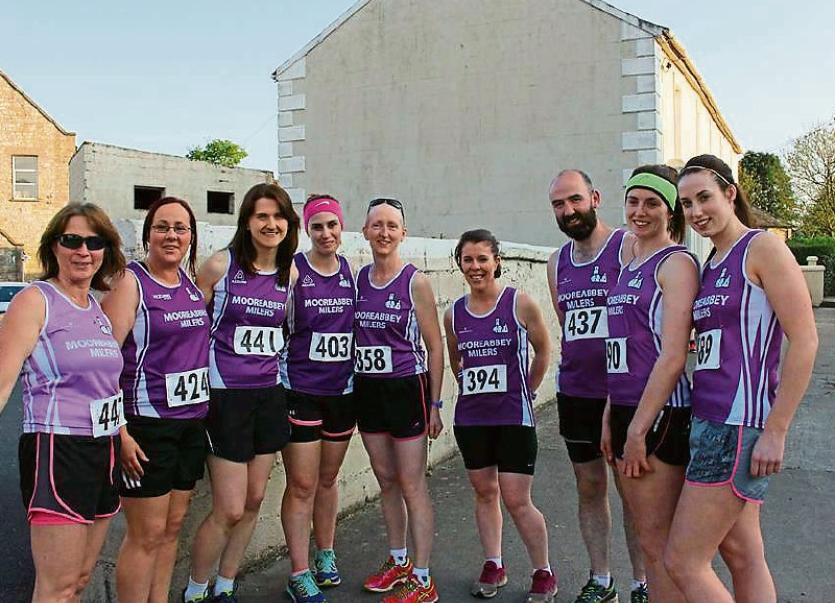 Mooreabbey Milers were delighted to welcome athletics clubs, as well as unattached athletes, from near and far for the first race of the Limerick section of the Ballyhoura Active Series 2016.

The first fifty runners received a free gift of a hat or buff from Ballyhoura Active.

The summer sun was shining and over 170 runners and walkers were smiling as they set off on a scenic 8k route from the village.

Competition was fierce but it was Michael Herlihy of North Cork AC who took first place in an impressive time of 26.30. Close behind in second place was Declan Moore of Bilboa AC followed by Danny Smith of Ballynonty AC. Kieran Lees was the first Mooreabbey Miler over the line in 28.45 and taking sixth place overall.

Catriona Farrell from An Bru AC won the ladies race in a fine time of 32.04 followed by Clotilde Fitzgibbon of Grange Fermoy AC in second and Kealey Tideswell of Clonmel AC in third place. Marie O'Shea was the first lady from Mooreabbey Milers to cross the line in 35.51.

Ben Coughlan was a very impressive winner of the junior race, finishing in 34.20. Congratulations to all who took part.

Premier Timing Systems did an excellent job, as always, on the chip timing and results.

Mooreabbey Milers AC would sincerely like to thank all those who volunteered their time to steward, bake, provide refreshments and spot prizes and help with registration. Without the help of these volunteers, the event would not have been the success that it was.

The next race of the series is coming up this Friday evening, May 20th, in Kilmallock. The 5 mile race begins at 7.30 pm and is hosted by Kilmallock AC.

On one of the warmest days of the year so far, five Mooreabbey Milers competed in this tough 10k race, through beautiful trails and over steep hills. Tom Blackburn ran a strong race to finish in second place followed by Ger Griffin, Robert Cunningham, Ewan Cunningham and Tricha Blackburn. Ger was second in his category, Ewan was the first junior and Tricha won her category. Well done all.

The Wednesday League kicks off this week with a race in Cratloe Woods, county Clare. The race is 8k in length and begins at 8.00 pm. Following this, the next race of the league will be held on the Silvermines in county Tipperary on May 25th at 8.00 pm. See IMRA for more details.

Mooreabbey Milers AC train in the community field, Galbally every Tuesday and Thursday evening at 7.00 pm. All are welcome.

Juveniles train on Monday and Thursday's at 7.00 pm. Tricha Blackburn holds her Chi Running class on Monday evenings at 7.00 pm also in the community field. €5.