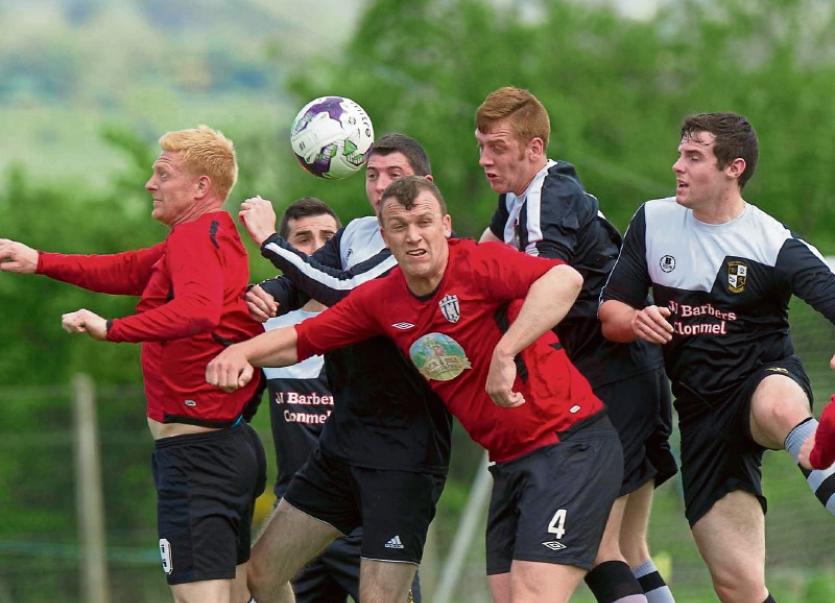 On an evening when revenge and remembrance were on the menu, St Michael’s created history on Saturday at the County Grounds in Ennis by winning the Munster Junior Cup for a record eighth time with a comfortable victory over Newmarket Celtic of Clare.

This was the same side that ended the Saints FAI Cup ambitions earlier this year so the Tipperary side were under no illusion as to the danger they might face when they travelled down almost into their opponents home patch.

Early exchanges were tense and Arron Wall caught a flick from Stephen Kelly in the fifth minute that looked to be goal bound. Celtic’s Eoin Hayes then shot wide from a lay off by Stephen Kelly, before Pa Quinn had a the first half chance for Saints following a free kick in the 13th minute. David Grincell hit narrowly wide from a Joey Mulcahy free two minutes later, and Grincell again was unlucky to be blocked near goal after he did well to take down and control a long ball just afterwards as the visiting side began to work their way into the game.

With the Saints now beginning to find their rhythm, they started to put Celtic under all kinds of pressure and finally took the lead ten minutes before the break when Jimmy Carr found space on the right and his shot went in the net after a deflection off Mark Donlon. A minute later it was two nil when David Grincell did well to rob a defender, cut in and lay the ball off for Richie Ryan to find the corner of the net from 18 yards. With their tails up the Saints continued on the offensive winning more corners and crosses coming in from Carr, and hit a devastating blow right on half time when Grincell scored with an overhead kick leaving it three nil to Saints at the break.

Newmarket were shell shocked and the Tipperary side largely cruised through the second half and could easily have added to their tally. The Clare side relied on hitting long balls which were mopped up by Paul Breen and Brian Buckley. The Saints defence dealt

comfortably with everything that came their way and the midfield had time to pass the ball around and attack at will. John O Brien, Pa Quinn and David Slattery all had opportunities to widen the margin in a game that was long over as a serious contest before Newmarket finally got a consolation goal in the final minute of the game when Stephen Kelly headed past Aaron Wall in the Michael’s goal. After a series of disappointments in Cups since their wonder year in 2014 this was a sweet victory, but was also touched by a hint of sadness when captain Paul Breen remembered the late Jimmy Walsh in his victory speech, father of winning manager James. But Jimmy wouldn’t have wished the players to dwell too long on that and he would have been right in the middle of the celebrations that followed the victory all the way back to a long night in Tipperary Town afterwards. The win also established a couple of records, with St Michael’s now moving out on their own as the mist successful team in the competition with 8 wins from 9 appearances, one more than Limerick giants Fairview Rangers, as well as still being the only club to have captured both the Youths and junior title in the same season. New signing David Grincell also joined an older Saints hero Kelvin Flanagan in becoming only the second player to complete the trio of winning Munster Youths, Junior and Senior medals to cap the night.