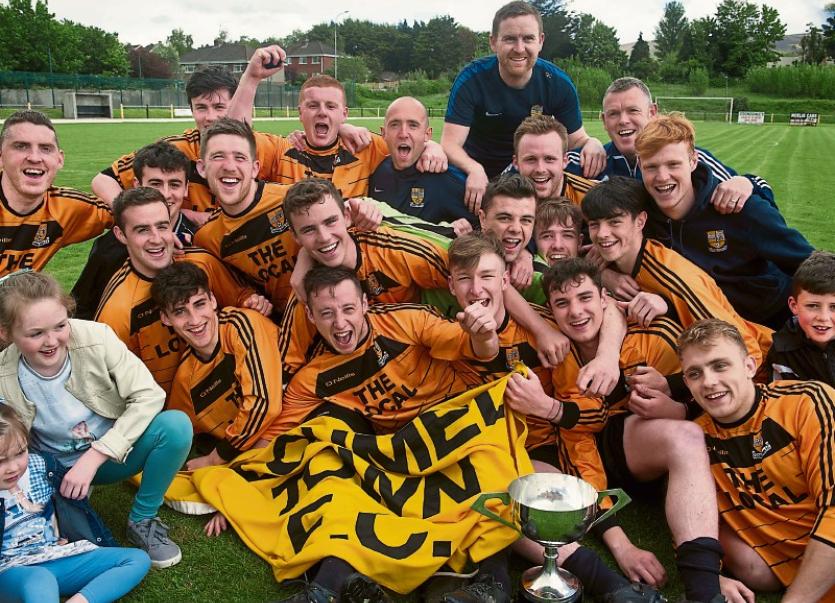 In one of the most novel Tipperary Cup final pair ups in the history of this prestigious competition, Premier League side Clonmel Town hosted Slieveardagh Rovers, a side only formed a short number of years ago, and who still ply their footballing trade in the Second Division of the TSDL.

Slieveardagh went into this game as the underdogs, whatever about the fact that they were not going to make it easy on their more illustrious opponents. And this was how the game panned out with the Clonmel side having the bulk of the possession and chances, but with the Ballingarry team more often than not repelling them with some strong defence, some fabulous goalkeeping, and now and again, some plain luck.

The first real chance fell to the home team in the fifth minute when they were awarded a free kick near the half way line and caught the Slieveardagh defence cold with a simple through ball which almost fell to David Mc Grath but instead carried on through to the goalkeeper. This was a portent of things to come however. Minutes later a cross from the right was spilled by the Rovers keeper and when it was hastily cleared to the edge of the area, the inrushing Jack Harney half volleyed the ball and looked like he’d opened the scoring before keeper David Cashin threw himself full length to touch the ball around the post and make up for his earlier error. Cashin was excellent again four minutes later when Town’s Ryan Lambe fired in a snap shot that he managed to push over the crossbar, and in the twenty first minute he kept his side at parity with another brilliant stop with his foot after a corner kick had pinged around the area before being shot goal bound.

However even Cashin’s man of the match performance wasn’t enough in the 33rd minute when Town finally hit the front. Again the Rovers defence conceded a free kick near the half way line, and again they were slow in organising their defence to adequately take care of it. This time they were punished when a cross from Aiden Mc Grath found the head of Paul Shanahan and he rose unchallenged to head home.

This was probably just reward for Town’s efforts in the first half and they looked like they were going to kick on and add to their tally as the game progressed. That wasn’t how it turned out though. Slieveardagh had the last real chance of the first half when Ian Ivors fired a tame shot at the Town keeper but early in the second half they had what looked like a legitimate penalty claim waved away by the referee.

They had an even better chance to equalise just after the hour mark when a cross from the right hand side was flashed across the box, but no striker could get a toe to the ball when even the merest of touches would have sent it to the net. Nevertheless in between both these chances, Cashin made what was probably the save of the day when after a mistake in his defence saw a ball whipped towards goal only to see Cashin move catlike and flick the ball upwards onto the crossbar and away, reminiscent of Gordon Banks great save in the 1970 World Cup.

But this was really the last notable piece of action in the game until the final minutes. Town had control of the tie, but for long periods seemed unable to make that dominance count, and only made the game certain in injury time when two of their double winning youths combined as Conor Sullivan chased what looked like a hopeless cause to the endline and pulled the ball back for Jack Burke to slam home.

The final whistle went shortly after and Paul Shanahan received the Cup from the sponsor Andrew Bourke of Clonmel Credit Union to the delight of the crowd.

All in all this was a good game, but not a great game as the saying goes, but Town will be happy to have packed away some silverware to show for their season.