Match Reaction from the dressingroom 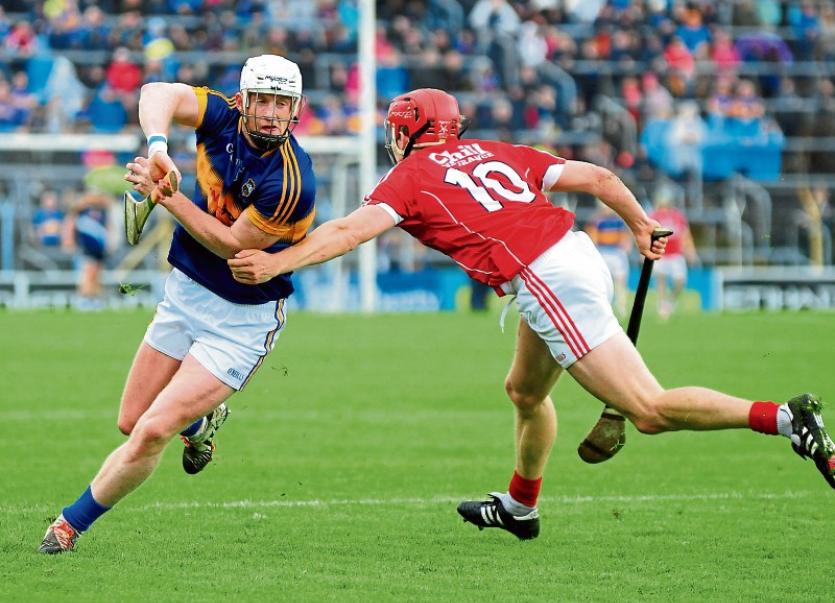 It's amazing the difference a championship win can make.

Tipperary's mood was very positive after Sunday's solid showing against Cork in Semple Stadium. There was a real spring in the step amongst the management team and the players, but there was also an acknowledgement all round that, just like that famous Fianna Fail mantra, there is 'a lot done, more to do'.

And, there was also a determination to, as Fine Gael/Labour promoted in the last General Election, 'keep the recovery going'.

But, just what have Tipperary recovered? Well, a bit of faith has been restored in the squad and while acknowledging that Cork were very poor on the day, Tipperary did their business in an efficient manner and more or less held the initiative from the moment Man of the Match Padraic Maher swung over the first score after just 28 seconds.

Tipperary laid down a marker - the game would be played on their terms - and crucially they never swayed from that marker for the duration of the game, eventhough Cork managed a rally of sorts in the second half.

“We found it hard in the second half with the wind that was against us and the rain as well. It was tough but we took advantage in the first half. We just wanted to get out with the win and if we got a performance, great. Everybody worked so hard and we had put a lot of concentrations for the last six or seven weeks, since Clare beat us in the league, so we just wanted to get over this and move on,” Padraic Maher said.

“It was very difficult for both teams, even trying to strike the ball and control the ball. We knuckled down hard and got the win which is what we wanted,” he added.

Both Michael Breen and Padraic pointed to the training set-up over the last few weeks as being key to the Tipp victory. Having studied Corks approach to games over the last number of months, Tipperary were well aware of how they would set out their stall in Semple Stadium. And, they were ready for them.

“We knew the way they would play and had set up for it over the last few weeks. They would be running around a lot and creating space. Our half forwards and midfield worked very hard and helped out the backs as well. But that's what we had planned -everything was for this game today,” said Padraic who added that Tipperary were not too far away in the National Hurling league having felt that they deserved to get something from the Waterford and Clare games.

Midfielder Michael Breen was one of those men who put in an enormous shift against Cork with a high intensity, hig workrate performance. He, alongside captain Brendan Maher, dominated proceedings and helped cut down on potential Rebel raids by shoring up the central channels. Again, this was something they had thought out, planned and ultimately executed with precision.

“ We have worked hard on cutting off space for Cork lads coming through. It was hard work and then we were making support runs as well which are very important. We wanted to do the basics right and on a day like today, you just had to concentrate on the basics,” Michael said afterwards.

Just like Padraic Maher, Michael was not getting carried away with the victory. Granted it was a very good showing, but it was only a quarter final and there is a long way to go in the championship. Tipperary's attitude has been - one game at a time- and while Manager Michael Ryan makes no secret that the ambition is to win the Munster Final, he also acknowledges that you must get to the final first in order to win it.

His mantra is rubbing off on his players. Breen said, “It's only one game and we will take it one step at a time. Limerick in a few weeks time - we'll set our sights for that game in the coming days and take it on again. We haven't had time to think about that yet. I'm sure we'll train hard for the next few weeks for Limerick now.”

Just like Padraic Maher, Michael pointed to the good position at half time as being a platform. However, he also alluded to the fact that Tipp were well aware that The Rebels would hit them hard and would come chasing after them in the second half.

“We regrouped at half time and set up again for a new game. It was hard work doing the basics right. There wasn't much room for skill out there. It was about getting ball to hand and taking the right options. Cork hit us hard, we knew that would happen. We had to weather the storm and thankfully that happened,” Michael said.

Tipperary people were generally very happy with the performance of their players on the day. They were particularly pleased for newcomers Dan McCormack, Seamus Kennedy and Sean Curran who acquitted themselves very well indeed and who now have a vital championship game under their belt. And, there was also a bit of action for Jason Forde, Niall O'Meara, Kieran Bergin and Patrick Maher - all vital to the set-up going forward.