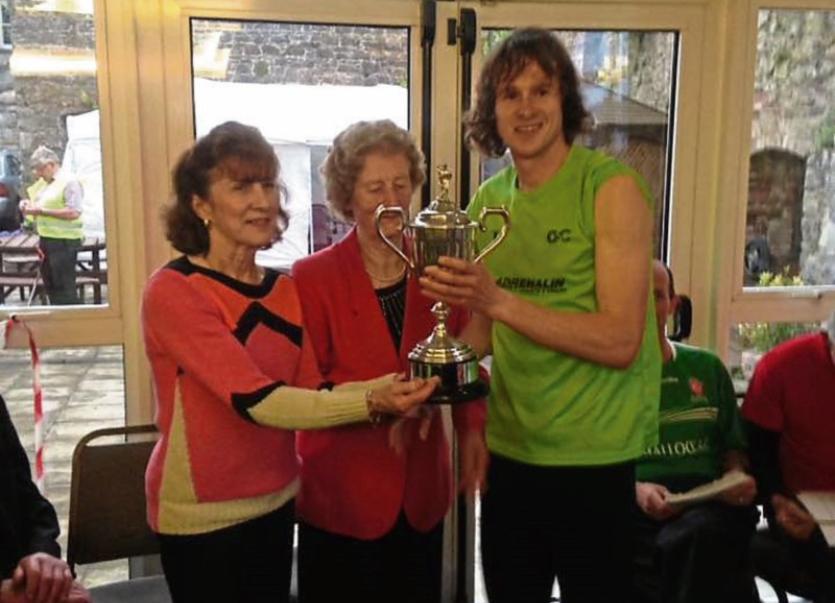 Last Friday night we were in Kilmallock for the latest race in the Ballyhoura active series. In spite of the wet start to the day the rain seemed to lighten in the evening and had stopped before the race started, and as you can imagine we were wondering what kind of numbers would turn up. We need not have worried as all the clubs came out in big numbers to support Kilmallock AC and with 240 running on the night we had a great crew. After a fast race in Galbally the week before, all the speedsters were all out in Kilmallock on the night and when that whistle sounded 10 runners soon broke away and you could see the cream rising to the top. The course record was demolished by Michael Carmody An Bru AC as he ran 25.38 second was Declan Moore Bilboa AC in 25.58 also faster than the previous record and third was James Dooran An Riocht AC in 26.11. Catriona Farrell An Bru AC continued her winning ways as she led the lady’s home in 31.36 second was Ann Mc Phail Dooneen AC in 32.25 and third was Aoife Carroll Mallow AC in 32.33. Gerry Forde from Blarney AC won the wheelchair prize. The two taste of Ballyhoura Hampers were won by Sean Mc Cauliff West Limerick AC who was presented his hamper by JJ’s Brewery owners John Coughlan and Jim Lynch on the night and the second hamper was presented by Mary Donegan Meyer of fit4life Health and fitness centre Kilmallock to Stephin Casey An Bru AC.

Michael Carmody won the Jim Hogan cup on the night and was presented the cup by Jims two sisters who were in Deebert house hotel for the race. Michael spoke of Jims achievements over his career and it was obvious his respect for Jims achievements. Deebert was packed to the rafters on the night and there was plenty of food for all who turned up and there was great credit to Kilmallock AC for their professionalism in running this event, there were stewards in high viz vests all along the route and through the town. Every aspect of this event was managed really well so well done to Kilmallock AC.

We are in Doneraile park in two weeks time on the 3rd of June for the 5km. This event is run by Mallow AC reg is at 7pm in the Community centre and the race is off at 8pm. We hope to see all the couch to 5km runners out in force on the night and hopefully we will get a nice evening for the race.