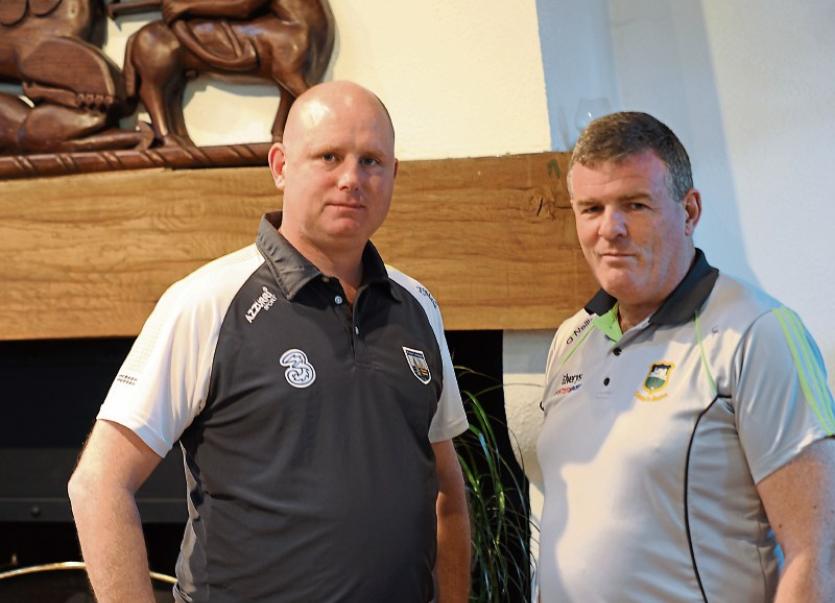 The Tipperary football Manager has had a season of trials and tribulations so far with multiple injuries, player defections, club priorities, and now emmigration, all testing him to the full.

This is not how the Kerry man envisaged life in The Premier County, but this is reality when it comes to Tipperary football.

When we chatted in advance of Sunday's clash with Waterford in the Munster senior football championship, Kearns was still smarting from the news that Kevin Fahey, Jason Lonergan and Liam Casey had decided to go Stateside for the summer, thereby robbing Tipperary of their services. And, throw in the fact that Colin O'Riordan (Australia) and Seamus Kennedy and Steven O'Brien (now with the hurlers) are also departed, not to mention injury worries for Kevin O'Halloran, George Hannigan, Ian Fahey and Brian Fox - one would nearly be tempted to ask, should we bring the boots on Sunday, just in case!!

On the plus side, Bill Maher is back in the squad with a high level of fitness and though admitting that the season so far has been 'very difficult', Liam is looking forward to the championship starting and hopefully getting off to a good start. He speaks of how well Tipperary did to retain division 3 status in the league, eventhough they just missed out on the promotion play-off. But, he admits, this counts for nothing on Sunday afternoon next in Fraher Field.

“We are going down there to win - make no mistake about that. But, from this time last year we have lost 11 of the 21 players who played in the win over Waterford. That's a massive turnover in personnel and with the game being on in Fraher Field it is a different proposition entirely, compared to last year. But still, I would see it as a step backwards if we don't beat Waterford and of course the big incentive for us would be to win and get a shot at Cork,” he says.

But, with so many new players in the set-up, there is a natural apprehension about how they will cope with the rigors of championship football as opposed to league fare.

“A lot of players have been introduced to life as an inter county player and thankfully they swam rather than sank. They are contributing to the planel and they showed that they are able to compete. But championship and league are very different and we will only really know when the game gets underway how things will work out for us. You only find that out when you start playing championship,” Liam says.

Of course Liams opposite number is former Tipp Boss Tom McGlinchey who was at the helm in 2002/2003 and enjoyed much success. He has coached extensively in Tipperary and living in Newport, the Garda knows as much about the Tipperary players as he does about his own current charges.

He speaks about the Waterford hurling championship having distracted his squad members with the vast majority hurling for their clubs, but he is hopeful that having completed the league on a winning note, Waterford can take confidence going into the Tipp clash. They had three one point defeats in the league as well, and were not too far away from promotion to Tipp's division -that makes Sunday's clash very evenly balanced, one would think.

“I know the Tipp scene very well and they are very formidable and getting stronger and stronger. I would be hoping that because this is a home game for us, it can give us an edge. Realistically, we are not going to win the All-Ireland - some of our players have never even won a championship game. But, if we can win this game and move on, maybe get a good run in the qualifiers, it will be progress for us,” Tom says.

Whatever about winning, both Managers lauded their players for the application they have shown so far and their desire and hunger. “I really enjoy working with the players and getting as much out of them as I can. What we are looking for against Waterford is to perform as best we can,” Liam said, despite his frustrationwith the problems encountered.

Tipperary captain Peter Acheson is , by his own admission ' not a big talker' so it came as a great surprise and a tremendous honour, when he was named skipper of the senior football team for the current season, writes Noel Dundon.

Few could question his leadership skills though - this general goes into battle in the front line and is constantly asking questions of opponents with his high energy, direct approach to the game.

Indeed, such is Achesons presence on the field of play, that he has been deployed in defence, midfield and attack in recent seasons - wherever he is needed really. And, what Tipperary would give to have another Peter Acheson in the side as well.

With a very positive, Obama-like, can-do attitude, Peter has plugged many a hole for Tipperary and is as likely to lead the charge in attack though playing in defence, as he is to defend though playing in attack. But, where does he perfer to play?

“I'm not really bothered about where I play to be honest. I've been used in a few positions and with the nature of football these days, you are all over the field anyway. I'll do any job I am asked to do, and happy to do it for Tipperary,” he says.

That's the kind of attitude that Liam Kearns and his management team have been trying to foster in the Tipperary set-up and it is rubbing off on the players. Peter points to the 'top class' training and refers to how fortunate Tipperary footballers have been to have had the likes of Peter Creedon, John Evans and now Liam Kearns at the helm.

Tipp have played challenges against Dublin and Limerick in recent week s in a bid to find out how ready they are for the championship fray. And, as they put the finishing touches to their preparations this week, Peter will help to rally the troops and get them tuned in mentally for the challenge.

“Down there in Dungarvan, Waterford will be very strong and solid. It will probably be a low scoring affair and there's usually a wind there which can make for difficulties. There is less chance of complacency in these situations though and to be honest, if you cannot be motivated for these kind of games at this stage, then you shouldn't be there. I won't be saying much to the players - I'm not much of a talker and I prefer to do my talking on the field if I can,” he says.

Tipperary supporters travelling to Dungarvan will be hoping that Peter is on song on Sunday as he is central to the Premier challenge.