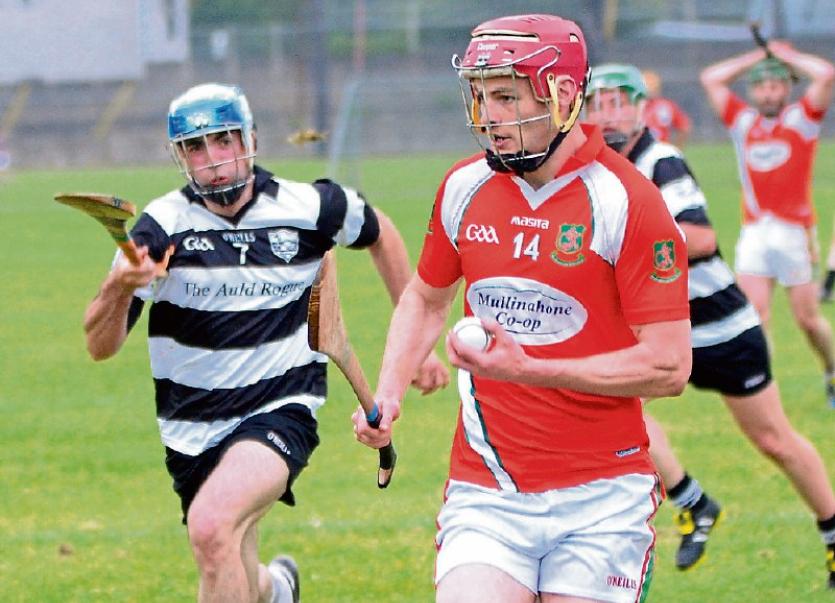 Mullinahone and Carrick Swan shared the spoils in an entertaining clash that got the South Tipperary Senior Hurling Championship off to a good start at Clonmel on Friday evening.

Referee Seanie Lonergan was in charge of his first senior hurling championship game and the Moyle Rovers man did well and he kept his cool in what proved to be at times a testy encounter.

Both teams began the game with a number of changes from the published lineouts and as a result a number of positional alterations. Darren Fahy, at corner back did not line out for Swan which allowed Damien McCarthy to come into the team at full forward. As events transpired this proved a happy choice for Swan.

Swan began the game the better. An early point in the first minute from wing back, Dale O’Hanlon served notice of their intentions.

Danny O’Hanlon opened his account with a point in the third minute. Kickhams were wide in an attack in the fifth minute and then in a sweeping counter attack Swan knifed through the Mullinahone defence for Damien McCarthy to goal.

Graham Horan pointed to open Kickhams account in reply. Kickhams began to find their feet and Eoin Kelly pointed from a free in the seventh minute.

Kelly had another point in nine minutes and Jack Shelly levelled with a point in 11 minutes.

Danny O’Hanlon restored Swan’s lead from the puckout. He then pointed a 65 two minutes later.

Eoin Kelly replied with two points from frees as Mullinahone struggled to stay in touch.

Swan’s Colin Loughman became the first player to be booked and Sean Curran pointed a minute later. Eoin Kelly gave Mullinahone the lead for the first time when he pointed a free from his own 65 in the 22nd minute.

Danny O’Hanlon equalised with a point in 25 minutes and Mullinahone suffered a blow when corner forward Paul Kelly had to limp off injured to be replaced by Enda Keane. Micheál Dunne pointed to restore Mullinahone’s lead, but in the 27th minute Damian McCarthy got his second goal when a dropping ball wasn’t cleared from the Mullinahone square. Aaron Dunne then added the first of his three points to give Swan a three point lead. However, Eoin Kelly cut the gap to two before the half time whistle sounded. Half time Carrick Swan 2-6, C.J. Kickhams 0-10.

In the second half, Mullinahone started explosively with a goal in the first minute from Micheál Dunne who was placed by Cathal Horan. Gerry Walsh received a yellow card and Eoin Kelly pointed the resultant free.

Eoin Fennelly came on for Mullinahone in 17 minutes. Jack Shelly put Mullinahone four points in front, but Danny O’Hanlon from a 65 cut the gap to only three.

In the 19th minute came the decisive moment. Donal Cody got through, but his shot for goal was stopped by Tom Kennedy at the expense of a 65. This was taken by Eoin Kelly, but hit the upright and was cleared.

A goal then or even a point would probably have seen Mullinahone home, but this didn’t happen.

Three minutes later as Swan attacked. Paul Curran was sent off as a result of a second yellow card. Swan then hit three points in a row to draw level while Mullinahone could only hit three wides in the same period. As the game entered added time, Eoin Kelly gave Mullinahone the lead with a point, but in the 34th minute Danny O’Hanlon who had been excellent from frees all night slotted over the equaliser for Swan.

Next Friday night sees the clash of neighbours Ballingarry and Killenaule as the South championship gathers momentum.