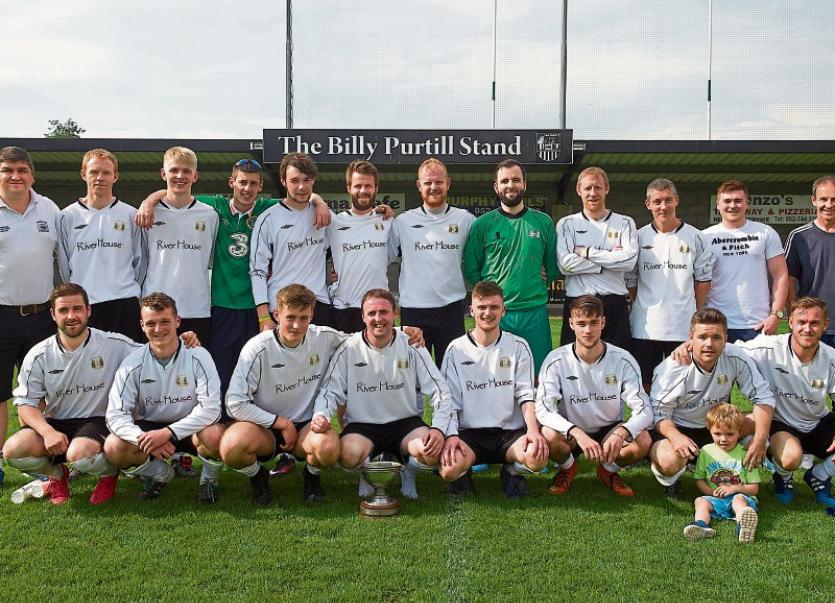 These were two teams coming off a week of harsh disappointment with Cahir losing out on promotion and Slieveardagh losing out in the Tipperary Cup final, but both also had a chance to redeem their season by picking up some silverware in Cahir on Sunday last.

Unfortunately the cruel nature of sport meant that one of the teams were going to be left empty handed again, and it turned out to be the Second Division side as they went down by a goal to nil to the home team.

On what was a beautiful day for football, with the sun shining, the home side started the better and opened up their lower league opponents on a number of occasions without making the pressure count. However, Slieveardagh haven't got as far this season by allowing themselves be over run and from about a quarter of an hour in, started to control more and more of the ball and dominate the play. A mistake by Andrew Burke in the Cahir goal almost left John Walsh in but the United striker fired over.

Again in the 20th minute hesitancy in the Cahir defence left Slieveardagh in on goal but Derek Walsh was unable to capitalise on the good cross he received from Eoin Burke. Two minutes later, Slieveardagh had their best chance of the half when Ian Ivors skinned the defence and crossed for Burke, but his namesake in the Cahir goal spread himself wide and pulled off a point blank save to keep the game level.

It really was all United at this stage and just before the half hour Jack Pollard came up from his right back position to fire another chot goalwards that was beaten away by the Cahir keeper. At this stage the home side were glad to get to the break scoreless but one couldn't help feel that Slieveardagh might rue their missed chances by the end.

And the second half showed how things can change with Cahir re-awakening and going back on the front foot again three minutes in last week’s man of the match in the Tipperary Cup final, David Cashin was made to do his first work of the day, when he stopped a shot from John Ryan, but within minutes, Ryan picked up the ball again on the right hand side, carried it past three United defenders and just when he looked to have over ran his chance, switched back around and blasted the ball to the net giving Cashin no chance to save.

With their tails up now, Cahir continued to press and within three minutes Cashin was again called on to push a free kick around the butt of the post to deny Barry Mc Cormack from putting his team two goals up. It looked then that Cahir were going to see the game out easily enough with Ryan putting in another masterful display in the middle of the field, but just after the hour mark, Slieveardagh looked to have equalised when they saw a corner kick cleared to the edge of the area, and Billy O’Brien almost broke the crossbar with a half volley. Unfortunately it careered away and with it his side’s chances of getting back in the game, as from that point onwards, the only real chances fell to Cahir, and when the whistle sounded there was huge delight in the home players receiving the trophy named after one of their most famous stalwarts.