Subs prove the difference as Tipp win in extra time 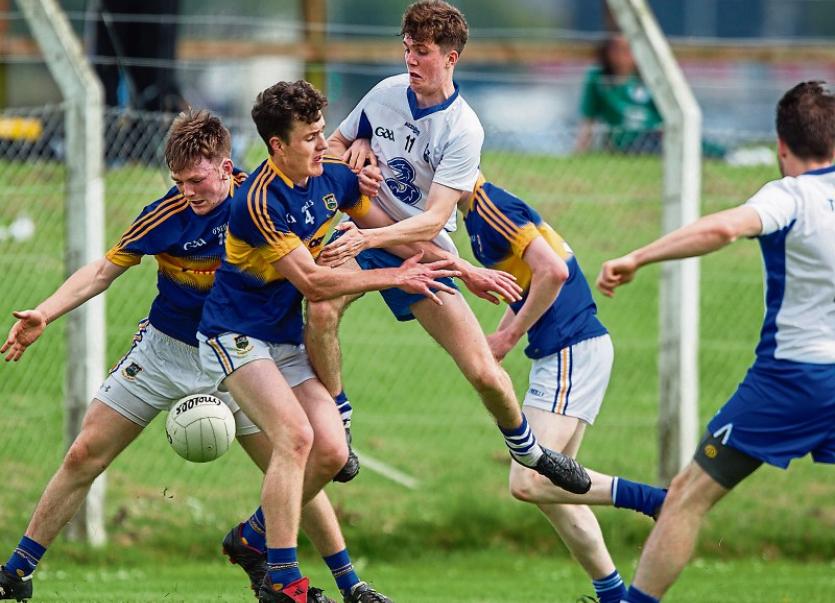 For far too long in this game Waterford showed greater intensity and more desire to advance than Tipperary who salvaged a draw with a late rally and looked comfortable closing out the game in the period of extra time required to separate these two teams.

Waterford had a goal disallowed, missed a penalty and saw Rian O'Callaghan block a certain goal on the Tipperary goal line during their fist half supremacy and should have inflicted more damage on Tipperary for their lethargic approach.

On a sweltering hot day in Fraher Field in Dungarvan, Tipperary were driven on to victory in the Munster junior championship quarter final by the fresh injection of pace and penetrative running from a number of substitutions who transformed the game.

Waterford were running down the clock in normal time with a three point advantage and it looked like there would only be one winner with twelve minutes left.

The introduction of Jamie Bergin, Mikey O'Dwyer, Gavin Ryan and Aidan Buckley for Tipperary had a major impact on the game.

Throughout the second half Tipperary started to come back into the game and punished Waterford for taking the foot off the pedal with the finishing line in sight.

With his first touch of the game, Mikey O'Dwyer slotted over a lovely point from a difficult angle with twelve minutes to go. It took Tpperary another ten minutes to pull back another score with the impressive Ian Barnes, full of movement and menace all day, dropping deep to pick up possession and firing one between the posts.

Tipperary now had the upper hand.

Aldo Matassa and Cathal Dillon were winning the greater share of possession and all of the subs introduced for Tipperary were causing trouble for Waterford.

Tipp had taken the last three points of the game without reply and in the twenty minutes added on they outscored Waterford by five points to four to give them a slender one point victory.

Tipperary were now playing the better football and even though Waterford took the lead two minutes into the time added on, Tipperary replied in emphatic fashion taking three scores without reply all from play. Two came from the excellent David Butler, who scored a very impressive five from play, and one from Barnes who was set up by Adrian McGuire whose powerful run opened up the Waterford defence.

The two most impressive players for both teams, Ferghal O Cuirrin and David Butler, swapped points before Dermot Ryan put one over for Waterford to leave just one point between the teams.

Waterford ran out of time and the best chances fell to Tipperary in the closing minutes.

Tipp’s best goal chance of the game fell to Jamie Bergin but he was denied by a tremendous save from the Waterford keeper..

In time added on at the end of extra time, Ian Barnes hit two wides but they were not to prove costly as Tipp ran out winners by a point.

It was an encouraging victory to record for Tipperary given how disappointing they were in the first half in particular even though they were just two points adrift at the interval.

That narrow margin was due mainly to Waterford’s inability to make their chances count and people such as Thomas Hanley who put in a very strong performance for Tipperary in that period.

Tipperary took the lead after just two minutes of the game with Joe Ryan scoring a point but they failed to score again for another nineteen minutes and failed to hold the lead again until six minutes into the twenty added on after normal time when David Butler edged Tipp ahead .

It was a lead Tipperary would not relinquish as they saw out the game with a strong finish.

Tipperary did ride their luck in the first half and Waterford will look back on a period which saw David Power, Ferghal O Cuirrin and Paul Walsh dominate without making Tipperary pay for their sloppy start.

John Hurney's shot was excellently saved by Jake McDonald after six minutes.. Hurney was fouled just before he took the shot and even though David Power blasted the rebound to the net, the goal was disallowed and the referee David Gough awarded a penalty for the foul on Hurney.

Waterford however would have preferred if Gough had played the advantage as Power missed the penalty and a glorious chance to give Waterford an early cushion in the game.

Tipperary were fortunate not to give a goal away at the end of the second half when full back Rian O'Callaghan, who had came on for the injured Dara Kearney, blocked a shot on the line to deny David Power again .

Those Waterford missed chances meant Tipperary were still in the game despite a poor first half.

They were only two points adrift at half time and the game started to gradually swing their way as the substutions began to make a telling effect. Tipperary put in a far stronger finish to the game in normal time, scoring three without reply and continued to hold the upper hand in extra time, fully deserving their victory in extra time accounting for a tiring Waterford.