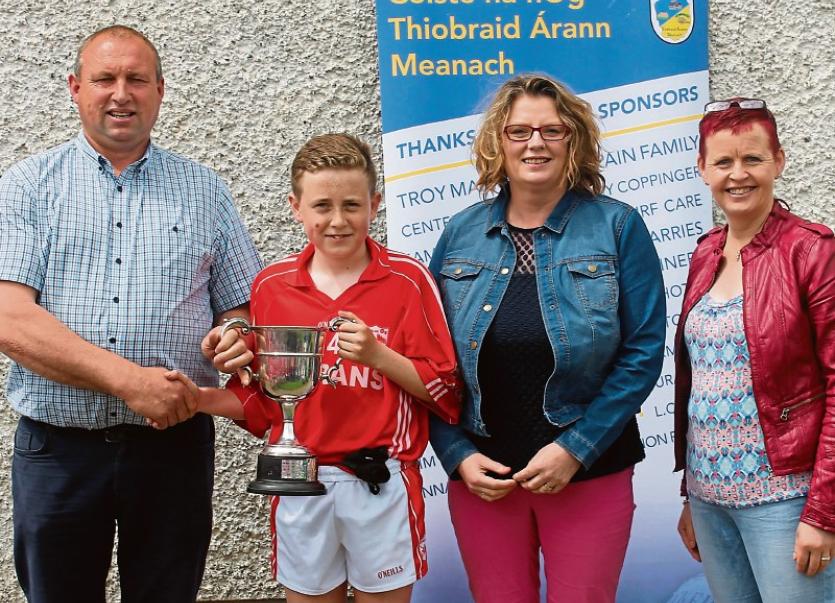 It was double delight for the Tipperary footballers in Fraher Field, Dungarvan on Sunday afternoon when the sun shone brightly - before the rain, and the eventual thunder and lightning.

Perhaps the Gods were unhappy at what they were witnessing on the field of play - both games were of poor enough quality with the dead heat making it hard for players to find reserves of energy.

Mind you, the Tipp juniors, who had played second fiddle for most of the game, came good in the closing stages and were the better side by far in the extra time period. Tommy Twomeys men advance to play Cork in the semi-final and will have to manage more of the extra-time fare if they are to make an impression on the Rebels.

Drom-Inch's David Butler shot five excellent points in that game - it was a very productive weekend for the big man as he bagged 0-2 in his senior hurling club game against Upperchurch Drombane two evenings earlier in the county championship, en-route to a winner-takes-all victory.

The seniors were never going to record as big a victory over Waterford as they had done twelve months earlier - any thought of such a recurrence were way off the mark. Pride alone would have dictated that The Deise would not tumble to the same extent - especially in their own backyard. So, coming away with the victory was the important thing for Tipperary and we should remember that Fraher Field has not been the happiest of hunting grounds for the Premier County when it comes to football games.

After a slow start, Tipp found their gears and worked their way through them, eventhough they could easily have conceeded two goals in the first half, but for the excellence of keeper Evan Comerford.

Tipp picked off a number of long range scores - George Hannigan, Peter Acheson and Martin Dunne in particular proving their worth. This was an indication of the kind of game Waterford were playing - much like the hurlers, they had sweepers everywhere, men behind the ball, protecting their goal at all costs. It meant that once play entered the danger area, Tipperary players were descended upon and ended up having to turn back to await the cavalry. Thing is, Tipp were able to take those scores from distance in the 'second phase' and from there the platform to victory was established.

The win was achieved too without Robbie Kiely and Conor Sweeney both of whom were carrying knocks and the management will be hoping that the rest afforded them, will be of major benefit when Cork come to Thurles the weekend after next.

Tipp were back in training on Tuesday and will be focusing on Cork from here on. They will be looking for a good performance against them to take them into the qualifiers - realistically, that has to be the goal now. It is most unlikely that Tipp will get the better of Cork - to do so would require an exponential improvement on Sunday's showing and frankly, it doesn't appear to be within the players. The challenge for them is to prove us all wrong.

Perhaps had Liam Kearns full compliment to choose from, the mood might be more positive. But, as it is, with so many missing for a variety of reasons, a decent performance has to be the goal.

So, Drom-Inch advance in the county championship at the expense of an unlucky Uppercurch Drombane - the Church, one feels, are better than a number of the teams who have advanced but must now win the Mid championship if they are to qualify. That's a tall order considering that Loughmore Castleiney, Thurles Sarsfields and Drom-Inch are all vying for the silverware in the division also, eventhough all three are through to the county championship already. Still, that won't diminish their ambitions and the clash of Upperchurch and Loughmore this Saturday in The Ragg is sure to be a right game - a lot to play for here, perhaps the game against Drom-Inch will stand to The Church when they line-up against their rivals. The Shortt brothers were big losses to them against Drom-Inch - they need them back for Loughmore if they are to advance to the semi-final.

Quite a lot of talk about the fact that a number of clubs are already out of the championship before the start of June even - there will be more hanging up the boots after next weekend too. Perhaps a re-think on the Challenge Cups might be in order. Were these games to commence in June it would give clubs matches when the inter- county scene is preventing championship ties from being played - county players usually don't line out in the Challenge Cup games anyway. It would also mean that players are getting games in the height of summer and that Gaels have somewhere to go to watch a match in the sunshine, rather than in the much of March or April. Yes, there'll be a million reasons why this suggestion cannot work, but is it worth having a look at. Those clubs whose seasons have effectively ended now would surely be glad of a chance to play a few games, even on a more social setting if nothing else. Otherwise, it means that hurlers could be out of action for another nine months - that's surely not encouraging players to wield the ash.