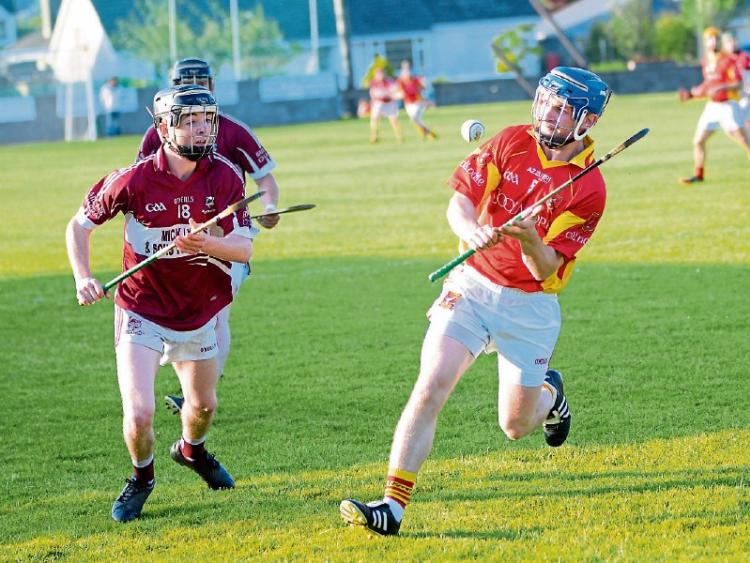 The much anticipated fervour and intensity, which has long been the hallmark of Killenaule and Ballingarry clashes, failed to materialise in resplendent Anner Park on Friday evening last, but it mattered not to Killenaule who prevailed by seven points in the end and are in pole position in the group after Round 1.

The first half was little more than a minute old when the occasion was marred by, what looked like a very serious knee injury to Ballingarry’s Padraic Hayes.

A six-minute delay resulted in Padraic been stretchered off the field, until he was finally replaced by substitute Trevor Ivors.

When play resumed Killenaule had the game’s opening score straight away, courtesy of a Kieran Bergin side-line cut, which split James Logue’s posts on eight minutes.

Killenaule set up with Tony Doyle switched from full forward to centre back, and opted to deploy John O’Dwyer in a roving midfield role, creating space for youngsters Eoin Barry and Dean O’Connor in a two man full-forward line.

Ballingarry fielded without their talisman Philip Ivors, which gave an opportunity to County Minor player Dylan Walsh to showcase his talents.

Kieran Bergin had his second point after 12 minutes, responding to an excellent Ciaran Shelly score from distance.

John O’Dwyer, clearly nursing the rib injury sustained while training with Tipperary recently, was hovering between his own half back line and midfield at this point, acting as provider more so than score-taker, which afforded his marker Gerard Fennelly to get on a lot of ball, and indeed the scoresheet after ten minutes.

Killenaule had two quick points, the first a fine solo effort from Daniel Guinan, which was followed up by an Eoin Barry free for a foul on Kieran Bergin.

Barry was unlucky not to double his tally moments later, shooting narrowly wide after a great catch and turn.

Then a huge Ian Ivors clearance was seized on by Dylan Walsh Shot who rifled to the net, giving Jonathan Gleeson no chance.

Cillian Touhy, another late selection on the Ballingarry team, chipped in with a neat point from the resultant puck out giving the Ballingarry men a two point lead after fifteen minutes.

Killenaule’s response was swift and clinical with three points in a row from Tony Doyle, Eoin Barry and Michael Doyle helping them to regain the lead by the minimum.

Dean O’Connor pointed for Killenaule following great work from Michael Doyle. Cillian Touhy responded with a great point from distance, but with Kieran Bergin winning yet another free for Killenaule, Tony Doyle edged them in front once more.

The tit-for- tat nature of the early exchanges continued when Trevor Ivors levelled matters in the 20th minute, and an Adrian Cleere free nosed Ballingarry ahead after Daniel Fennelly was fouled.

Injury struck again as the halftime whistle beckoned, this time Killenaule losing Cillian O’Dwyer to a nasty ankle injury and serendipitously Killenaule happened upon a winning formula, as the lionhearted Declan Fanning was introduced.

Fanning’s impact was immediate, shoring up the Killenaule rearguard and provided the platform for attack for the rest of the game.

Adrian Cleere then had two free successes, either side of a great Niall O’Dwyer goal chance, which was smothered by James Logue, and when Daniel Guinan was downed while bearing down on goal, Eoin Barry duly converted the free and the deadlock continued into half time on a scoreline of 1-7 to 0-10.

Eoin Barry notched another free just after the restart, which was followed up by a speculative Niall O’Dwyer point after a quick line ball from his brother John, and with that Killenaule pushed ahead with intent, and asserted their dominance which atoned for nine first half wides.

A great catch and mammoth clearance from Declan Fanning was gathered superbly by Eoin Barry, who dispatched the ball to the net with aplomb.

Ger Fennelly replied with his second point to abate the onslaught, but an Adrian Cleere miss from a scoreable free was a blow to their cause.

Killenaule were now upping the ante, and three points in as many minutes without reply, all from the stick of Tony Doyle put them well in control.

A monster score from distance after another Declan Fanning catch, sandwiched between a 65 and a free for a foul on Joe O’Dwyer. Michael Doyle then put Kilenaule eight up as it began to look perilous for Ballingarry. Ballingarry then introduced Eamon Touhy in an effort to stem the tide. A mini revival ensued with two successive Ballingarry points from Adrian Cleere and Dylan Walsh. Walsh and Cleere combined again with five minutes to go, but the goal that they were trying to fashion proved illusive and the minor settled for a point. Eoin Barry put any hope of a comeback to bed with two more frees, even though a Dickie Norton point was unlucky not to creep under Jonathan Gleeson’s crossbar. Adrian Cleere’s effort with time up was a mere token as Kieran Bergin, and John O’Dwyer points underscored a comfortable victory.

Ballingarry were well in this game and showed competitiveness right to the end. Victory in their next game will be crucial if they are to have any chance of making the last four. If that’s to happen they’ll be looking to the likes of Ian Ivors, Ger Fennelly,Adrian Cleere and Dylan Walsh who couldn’t be faulted on this showing. Killenaule have often played much better and one would assume that they will only improve. Their win sees then nicely placed to qualify, with another victory needed to be sure. Kieran Bergin, Tony Doyle, Declan Fanning and particularly Eoin Barry were excellent throughout.