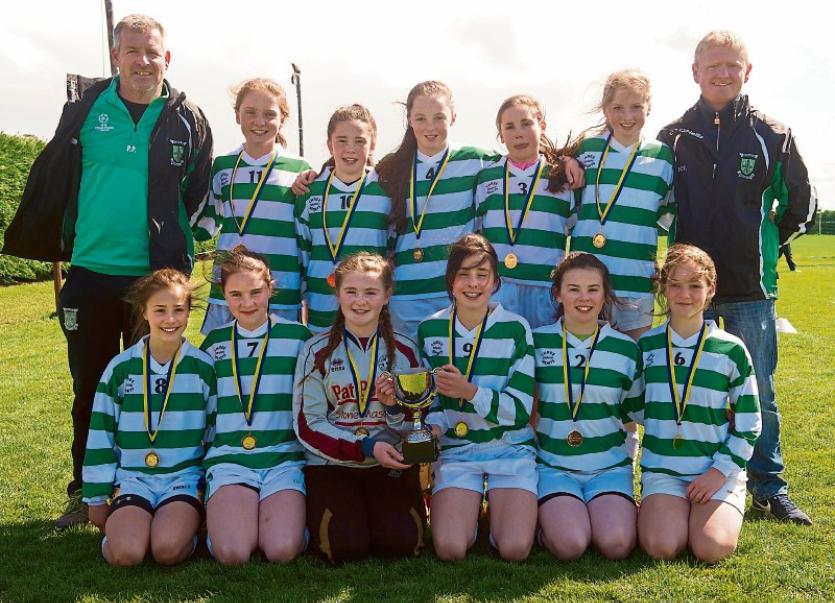 This was always likely to be the most hard won Cup of the weekend as all four teams that headed into the Cup could legitimately have harboured thoughts of winning the trophy by the end of the weekend. And things proved to have gone that way with two close semi finals.

In the first Tipperary Town faced Cashel Town and the Tipperary girls put on a masterful performance of counter attacking by stifling the Cashel girls forward line and looking to hit them on the break when the opportunity arose. Chances were at a premium and it looked like it could go all the way to penalties until Tipperary Town were awarded a free kick 20 yards out with five minutes of normal time to be played. The free was struck into the wall but instead of bouncing away to safety it took a wicked ricochet and left the Cashel keeper rooted to the spot as the ball passed her and into the net to girl the Tipperary girls a slender win.

In the other semi, league champions Clerihan faced off against a strong Peake Villa side. Both teams went at the game hammer and tongs and had opportunities to score, before the Clerihan girls finally broke the deadlock near the end of the first half. This left the Thurles girls chasing the game and there is no better side than Clerihan to exploit gaps left in a team’s defence. Two more goals on the break in the second period, one from a penalty kick meant that they would get a chance to add the Cup to their league title already won.

As was expected, this was a very close and tight game. Clerihan opened up the brighter but thee excellent Tipperary defence made sure that chances were kept to a minimum and they very rarely troubled the Town keeper. At the other end of the pitch, the Tipperary girls had a number of chances but again Clerihan gave them little real opportunities to open the scoring and eventually the game went to extra time. That was unable to break the deadlock and finally this became the only final of the weekend to go all the way to penalties, where Clerihan added the Cup to their already won league title to the bitter disappointment of the Tipperary Town girls.

When team captain Aoibheann Foley lifted the Cup it was to huge celebrations.

In the Shield semi-finals, the combination team of Burncourt/Kilbehenny, now affectionately known as Kilburn faced off against local team St Kevin’s, while in the most novel pairing of the day, the two Killenaule sides who play at u14 level faced off against each other. The first game saw a recently improved Kilburn side prove to be too strong for Kevins and they advanced to the final, and in the second game it was the Killenaule B team who prevailed against their A’s to contest the final.

The final of the under 14s though, turned out to be a one sided affair as the Kilburn girls took charge from early on and despite trying to get back into the game in a number of occasions, the Killenaule girls really couldn’t make any huge impact against their much stronger opponents. A brace of goals in the first half by Aoibheann Clancy, along with two more from Helen Burke and Edel Landers, put the Kilburn players in a strong position early on, and a fifth by Clancy in the second period applied the coup de grace to the game.