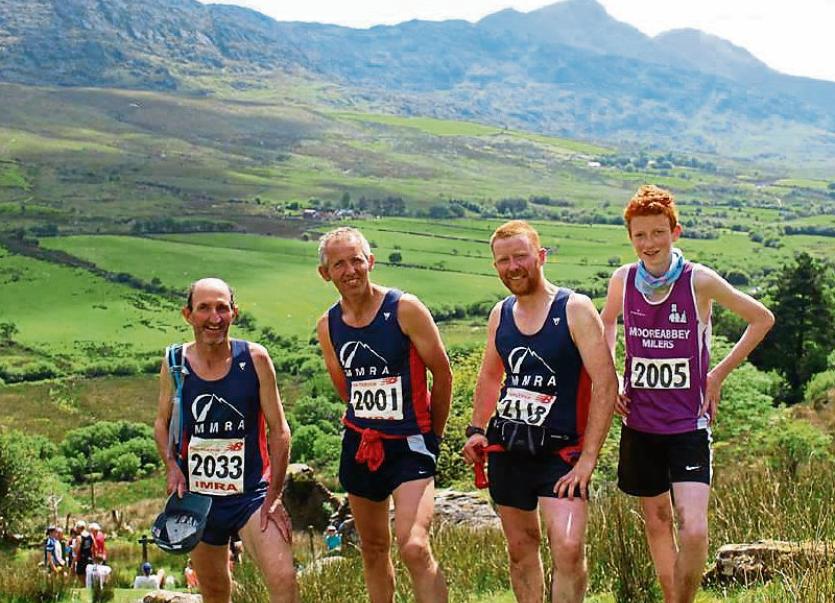 Mooreabbey Milers AC have jumped into June with great gusto.

The club was very well represented in many events around Munster over the last few days.

On Wednesday evening last, fifty nine runners came to the quaint village of Lisvernane in the Glen of Aherlow to take part in the popular MMRA Wednesday League race. Of these, there were thirteen members from Mooreabbey Milers. Tom Blackburn proved to be the strongest over the 9k course, which took in hills, forest trails and stunning views of the Galtee mountains. Tom won the race in just over 38 minutes. Marie O'Shea was the third lady overall. Ewan Cunningham was the first junior. Excellent running also from Ger Griffin, Willie O'Donoghue, Robert Cunningham, Pat Hartigan, John Hayes, Martina Moloney, Kathryn Hogan, Tricha Blackburn, Mairead Mulcahy and Mary Pyke.

This week's race will be in Kilworth woods, county Cork followed by Keeper Hill near Killoscully in county Tipperary on June 15th at 8.00pm. See IMRA.ie for more details.

The Ballyhoura Active Series moved to county Cork last Friday night. 425 runners took part in the 5k race around the tranquil grounds of Doneraile Park on a warm, sunny evening. Thirteen club members were among this large number of competitors in this event which was hosted by Mallow AC. There were some PBs and excellent times recorded by the Mooreabbey Milers. First over the line for the club was Robert Cunningham in 20.34 followed by Kevin Lenihan in 20.51, Chris Gallaghue, Pat Hartigan, Mairead Mulcahy, Louise Casey, John Frazer, Honor Hayes, Siobhan Casey, Orla Hickey, Amie Hickey, Claire Lonergan and Tricia Ryan.

The next race of the series moves back to Limerick on Friday 10th of June. Kilfinane AC will host a 4 mile race at 8.00 pm. The registration fee is €12.

Five courageous club members travelled to Kerry to take on the mighty Carrauntoohil on Saturday last. This race up and down Ireland's highest mountain was part of the Irish and Munster mountain running championships. In complete contrast to last year's horrific weather, the sun was blazing down on the runners for Saturday's race. Tom Blackburn ran a strong race to take fourth place overall. He was followed by Ger Griffin, Robert Cunningham and Tricha Blackburn. Ewan Cunningham ran a shorter race up to the top of Caher and back which took in a near 1,00m climb. He was the only junior to run. Slievenamon will play host to the next race of the Munster Championship on June 19th at 1.00 pm.

JT Ryan enjoyed the Cork City Marathon on bank holiday Monday. He completed the 26.2 miles in 3 hr 55 mins, which was under the time that he had aimed for. Congratulations go to JT on a great achievement and to all our runners who competed over the last week.

With less than five weeks to go to the Cahir Downhill Half Marathon, registrations are flying in. We had over 400 registered last year and would expect more than that for this year's race on July 10th. There will be a great atmosphere around Kilbehenny, where the race starts and in Cahir where the race ends. Families and supporters can expect music, face painters and clowns as well as the colour and giveaways of Cahir Credit Union at the finish line area of Cahir Castle. Runners will enjoy an energetic warm up at the start. There will be three water stations and portaloos en route. Each competitor will receive a high quality technical t-shirt, two course meal, showers, physio treatment, fresh fruit and a goody bag. Registration can be made through itsyourrace.com at €40. 50% of profits go to the children's arthritis charity, iCAN, the remaining goes directly back into our club development.

Mooreabbey Milers AC continue to train every Tuesday and Thursday in the community field, Galbally at 7.00 pm. All are welcome to join in these sessions.