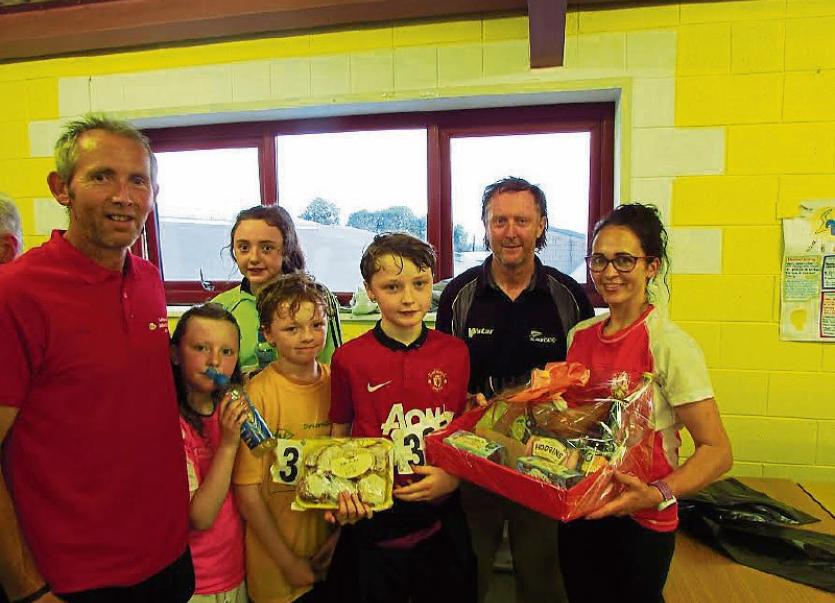 Friday night in Kilfinane looked like it was going to be a dull wet night, the sky was gray and showers had been passing through all day long. At 7pm when reg opened there were a few drops of rain falling but as the evening passed the sky cleared and as the race took off it was warm and humid 180 runners from all over turned up for what turned out to be a great night on this lovely 4 mile route the fast start caught some runners as a lot of people ran a very fast first mile. There was a sting in the tail as the last mile climbs back up towards Kilfinane and finishes at the GAA pitch, those who took off fast suffering in the last two hundred yards.

Declan Moore Bilboa AC made his third appearance in the series and left nothing to chance as he led from the start and finished well clear of the field in 20.42 second was Paul Moloney Mallow AC in 21.28 and third was John Kinsella Bilboa AC in 22.17.

The lady’s race was won by Carol Finn Leevale AC in 24.16 Carol is flying and we wish her sister Michelle all the best as she will be heading to Rio to represent Ireland in the steeple chase in August, second was Fiona Boyce North Cork AC 26.16 and third was Jean Mulcahy An Bru AC 27.25. Kil;finane AC did a fabulous job on the night and the event ran off without a hitch. Thanks to all who helped to organise and steward this event and everyone who ran on the night and we hope you enjoyed it as much as we did. The taste of Ballyhoura Hampers were won by Paddy Bourke from Mooreabbey Milers AC and was presented by Maurice Gilbert Ballyhoura Apple Farm. The second Hamper was won by Michael O Dwyer Kilfinane AC and was presented to him by Ellen Lewis Hanley of Ellen’s Baking.

Our attention now switches to Bilboa this Friday night the 17th of June reg is from 7 pm in the clubhouse the race starts at 8pm,full directions are on the website. This race is the Gerry Mulane memorial 10 km and this year the committee have added a 5km. The Bilboa 10km is a classic race on a fine course and was used for the National 10km championships a few years ago this is not the easiest of routes but the best available to Bilboa AC and the addition of a 5 km route gives runners a great option. Looking forward to seeing you there as Bilboa AC always look after those who attend on the night.

One of Limericks finest Adrian Hennessy from Kilfinane who on the May Bank holiday weekend won the Ballyhoura mountain marathon in 3.38 was back in action last weekend as he took on the might of the Wicklow round which is a route through the Wicklow mountains over 26 peaks in access of 100km and with a climb of 6000 meters and all in under 24 hrs. Adrian is now part of a very elite group of people who accomplished this and came close to setting a new record for the route.