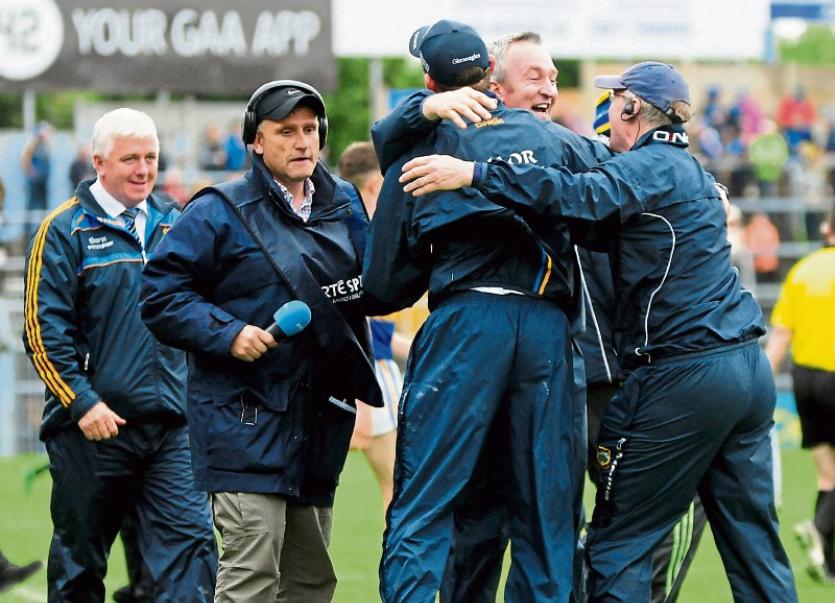 Tipperary manager Michael Ryan was buzzing after the final whistle on Sunday.

The Upperchurch Drombane man embraced his fellow selectors as the rain continued to fall, the joy on their faces evident - the job was done, Tipperary were back in the Munster senior hurling final. It's where they wanted to be, he said, and he pointed to the maturity within the side as being key to avoiding any derailment following the sending off of John Bubbles O'Dwyer.

“We were thrown a curve ball with the sending off but it didn't derail them and that's down to the maturing of the group. It was not a normal half time at all. The players took it over and by the time I had to speak to them it was basically to wish them well. These boys are mature and the core of that team have been hurling since 2009. They have a lot of experience and a lot of hard experience,” Michael said afterwards.

While the game didn't go to plan with the sending off of the Killenaule man, a lot did work out for Tipp. And, it didn't just happen either - it was made to happen thanks to the huge work ethic demonstrated - it was Tipperary back to the kind of energy shown in the 2010 All-Ireland Final, or the drawn final of 2014. The signs are good for the side - now we know they can get to those levels again, the key will be to maintain them.

“The workrate and attitude was super and we were all the time waiting for more bodies to tire, but I think they found more energy within themselves. I just thought they were outstanding but let's not get carried away. This is a Munster semi-final and in three weeks time we have to turn around and play the most serious opponents in Munster, if not Ireland - Waterford are up there in my opinion,” Michael said and while he added that they must now plan without Bubbles, he could namecheck at least eleven other players who will be mad to take his place.

Padraic Maher also used that word ' maturity' in referring to Tipperary's performance. The brilliant left half back who smashed over Tipperary's final score of the game was full of praise for his colleagues. And, despite the blood trickling from his torn ear - the scars of battle evident all over - he took time out to reflect on what was a great win.

“We showed maturity and knew that we had to get through ten minute blocks. We were delighted having come in at half time three points up. It was a matter of showing composure and keeping the heads. We had to use the ball as best we could and get it to the lads in the forwards who would do damage. We knew we had to work a bit harder. Unfortunately we conceded the goal late on. It was a tight win and Limerick fought to the bitter end but we have to be delighted with our own show of character. We want to retain our Munster title now - that was our aim at the start of the year,” he said.

Brushing aside the downside to winning the Munster Final - a five week lay-off to the All-Ireland semi-final - Padraic said. “We had a four week break between the Cork and Limerick game. Give me a Munster title and a five week break and I'll take it any time. That wouldn't be a problem and we won't be thinking about it. We concentrate now on Waterford, nothing else. We have a tough few weeks ahead again ,” he said.

Cathal Barrett pointed to the level of on-field communication in the team to being key to Tipp's progress this summer. “We are constantly talking to each other and that's a big help. It's only a small thing but it keeps you on your toes,” he said.

He added, “Our backs were tremendous and as a unit we hurled very well apart from the last minute when we got caught for the goal. For a second after the sending off there was shock to the system but then you just have to re-set and start plugging away and give the ball to the lads in attack.

“It's a massive game for us to win. There were big hits and it was energy sapping especially when we were down to fourteen men. Against Waterford it's like playing against fourteen backs, so that will have done us the world of good,” he said.

Noel McGrath, scorer of three second half points chipped in with: “Winning today was our number one aim and we'll recover and get ready for the game in a few weeks time. We had a serious test in tough conditions with the ball skidding all over the place. There has been serious work going on over the last number of weeks and months and lads pushing hard for positions. I think it showed there today that there is a will and desire and lads are aiming for something big. We have a massive test in three weeks time because Waterford have serious credentials.”

Yes, Waterford are lurking on the horizon, plotting to take the title from Tipp. But, Tipp will be plotting too. “They are completely and utterly different opposition with a fantastic defence. They'll take us the full of our time in terms of planning and organising ourselves to take on the challenge. But, take it on we will,” Michael Ryan promised.