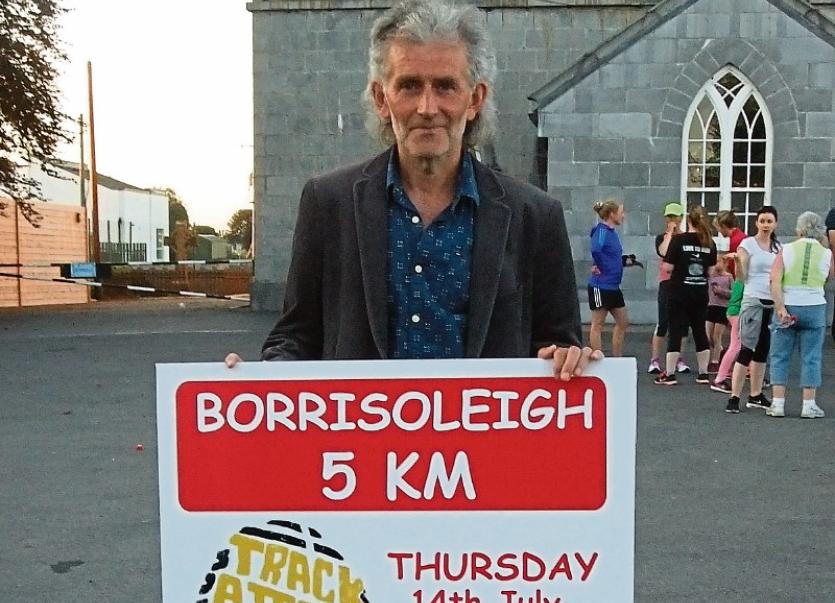 As the road-running boom continues to flourish on a nationwide scale, we hope to see the roads surrounding the village of Borrisoleigh awash with athletes of all standards on Thursday 14th of July when Track-Attack plays host to the third annual Borrisoleigh 5km road race and walk.

The course, which takes in the Golden Mile of Rathmoy offers all comers the chance to have a serious shot at their Personal Best time. We have put together an attractive race package that will cater for all standards with no stone been left unturned to guarantee that all participants will enjoy this sporting experience.

This year’s event will be chip timed by Niall O’Sullivan of Premier Timing Systems. The entry fee is €10 per athlete with under 18’s at €5. There is a change of venue for this year’s taking of entries with this been moved to the Parish Centre (behind the church). The post-race presentation will also be held here. Parking will be available at the GAA grounds.

The winning man and woman on the night will each receive a cash prize of €200. They will also receive a bonus of €100 if they can break the existing course records. These were set last year by Clonmel’s Kevin Maunsell when he zipped around in a time of 15:28 while the recent winner of the Women’s mini-marathon in Dublin, Siobhan O’Doherty of the Borrisokane club finished in an impressive time of 17:07.

At the post-race presentation, participants will be served with tea and refreshments while they will also be treated to ice-cream to reward their efforts!!

Track-Attack would like to welcome and encourage all comers to make their way to Borrisoleigh on the night. It doesn’t matter if you run, jog or walk, all are welcome. Entries will be taken from 6:15pm onwards with the start siren bellowing at 8pm from outside St. Joseph’s School.

The Track-Attack on Tour Series will next Monday night see us head to the village of Kilcommon and it would be great to see a good crowd head there. To date the Series has proved hugely popular as Track-Attackers take to roads that they haven’t previously ran on.

Last week in Templederry, many attacked and impressively negotiated the hills around Loughane and returned back to the village in good shape!! Michael Murray was first to return in a time of 30:07 followed by Tom Shanahan in 30:26. Next to return fresh from his hugely impressive run in the Shannon Airport 5km was John F. Kennedy where it’s reported that he managed to avoid contact with all modes of moving traffic!!!!!

Aoibheann Carr was first to return home over the shorter course which was around the Templederry Ring in a time of 19:10 while Donal Ryan successfully held off the challenge of his wife Noreen to finish in times of 19:25 and 19:27 respectfully. Special mention to young guns Matthew Barry and Sean Og Hayes who both ran very impressively on the night.

On Friday night next in Finn’s Bar Borrisoleigh, Track-Attack will hold the draw for the lines sold in support of Trevor Groome’s 24 hour Mizen to Malin Challenge. This will take place at 9:30pm. We would ask any outstanding cards to be returned to Declan Maher, Mark Stapleton or Pat Keane before the night.

On the night, Track-Attack will also acknowledge Trevor’s outstanding achievement and we would welcome everyone to come along on the night.