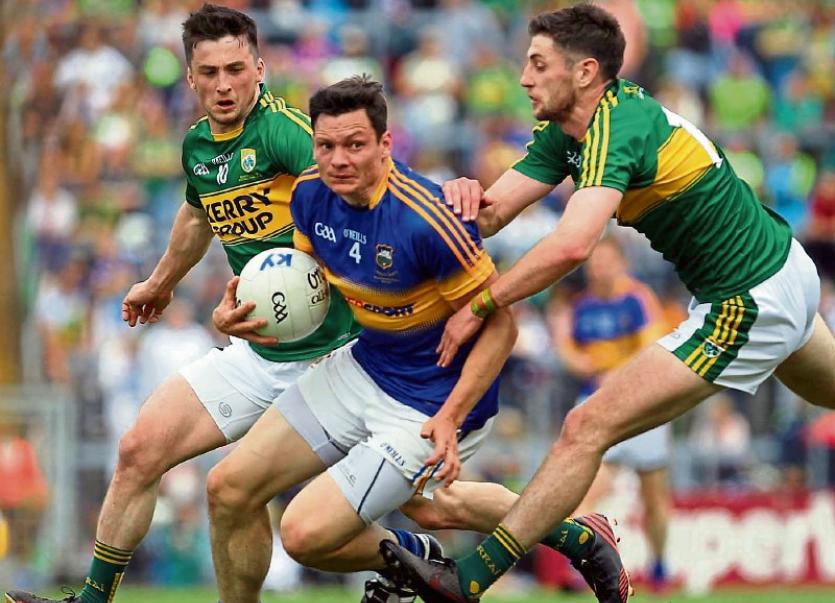 On their return to Munster final day after a gap of fourteen years, Tipperary suffered a deeply frustrating and chastening experience.

Despite a dream start of a tonic goal from Jimmy Feehan after just thirty five seconds, a superior Kerry team quickly established control to cruise to victory.

They were never going to allow Tippeary to spoil their four in a row party in Fitzgerald Stadium.

Tipperary were denied the space and time needed to generate the kind of rhythm they found against Cork.

The Kingdom, having choked the life out of Tipperary's attacking threat, displayed a ruthlessness in front of goal.

Their forwards thrived on the precision and quality of service into them which combined to deliver an end product to kill off the Tipperary challenge.

Although Feehan's goal gave Tipperary some hope , in truth there was only one stage in the game when Tipperary threatened to make a game of it - in their best period of the game at the start of the second half.

Tipperary, six points in arrears at the break, came out at the start of the second half with renewed vigour.

They had failed to score a point from play for the entire first half but squandered three good chances to put that right at the beginning of the second.

Josh Keane, Conor Sweeney and Kevin O'Halloran hit three wides in the opening four minutes of the second half.

Having squandered those chances Tipp went further behind when Bryan Sheehan converted another free and Stephen O'Brien punished Tipp who fell asleep for a quickly taken Kerry sideline ball.

O'Halloran responded with a '45 before Tipperary were desperately unlucky not to make up significant ground on Kerry.

Michael Quinlivan, who had an excellent second half, forced a spectacular save from Brian Kelly i n the Kerrygoal.

Quinlivan, who had been starved of any kind of decent supply throughout the first half, burst into life in that second period, posing a real threat to the Kerry defence.

Ten minutes into the half his fierce shot was heading for the top corner of the net before Kelly intervened.

A goal would have reduced the deficit to just four poins at that stage but Kerry just moved into another gear to pull away again from Tipperary. Ace marksman Paul Geaney pointed before being set up for his second goal with a beautifuly weighted diagonal ball from substitute David Moran. Geaney's turn and pace deceived the Tipperary defence and he cooly picked his spot, placing his shot past the advancing Evan Comerford.

That Geaney goal, which stretched the lead to eleven points, secured the game for Kerry who were afforded the luxury of emptying their bench in the Fitzgerald Stadium sunshine.

The Kerry threat did not subside as a result as they were able to call on such quality as James O'Donoghue, who slotted over four points from play with consummate ease in twelve minutes and Barry John Keane and Michael Geaney also picked off scores after being introduced as substitutes.

It highlighted the strength in depth available to Kerry. They lost Colm Cooper to injury after just twenty minnutes and removed midfielder Kieran Donaghy from the fray after forty nine minutes which was an indicator of just how dominant Peter Acheson was in that sector.

To their credit Tipperary showed an admirable resilience to continue to work hard for each other despite the margin between the teams.

That eleven point lead was instantly pulled back to eight when Michael Quinllivan, again causing trouble for Kerry with his direct running, set up Robbie Kiely for a goal thirteen minutes into the second half.

Quinlivan's run dragged a number of defenders with him and while he had an option to his left, he showed great vision to pick out the unmarked Kiely who had ghosted into a good position on his right.

Kiely, one of Tipp's top performers on the day, made no mistake and took his chance with great confidence.

It was merely a consolation goal at that stage for Tipperary who had to wait another five minutes to register their first point from play when Kevin O'Halloran slotted over from distance.

Quinlivan, after an excellent pass from Bill Maher, one of the few quality passes to the inside line delivered all day, slotted over another from play as did substitute Alan Moloney in injury time bringing Tipperary's total point count from play to just three.

It was a disappointing points return from play for Tipperary but they showed again, after their three goal haul against Cork, that they have a serious goal threat after registering two against Kerry.

The goals and the success they achieved in winning Even Comerford's kick outs was a big plus to be taken from the day.

They won ten out of twelve in the first half, as well as winning a fair amount of Kerry kick outs and that is one of the positives that can be taken from the defeat as they prepare now for the last twelve and a shot at making a Croke Park quarter final.