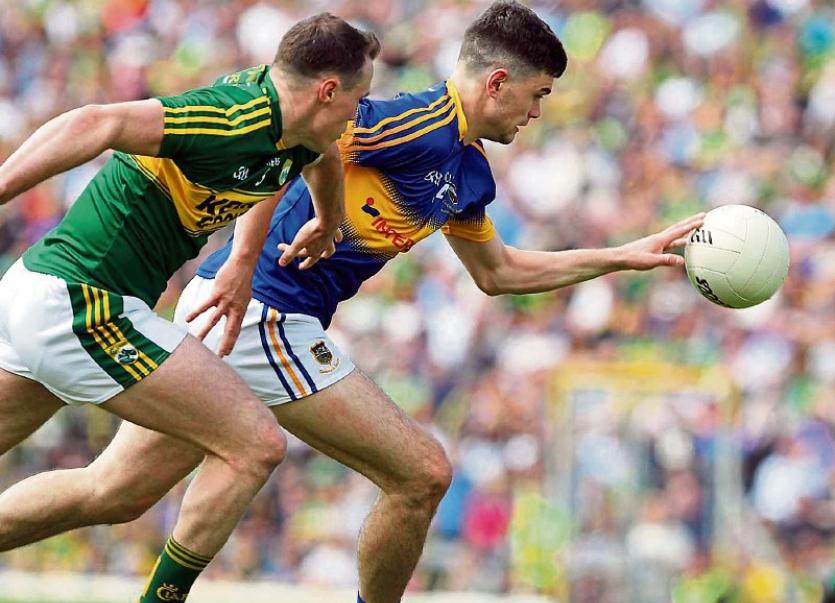 For such a fierce competitor, captain Peter Acheson was disappointed that Tipperary failed to get their best performance for Munster final day.

The Moyle Rovers man summed up the frustration felt by the players after their ten point defeat when he expressed regret that they did not reach their potential on the day.

“It was brilliant to get here alright and we weren’t here to make up the numbers but we are very disappointed. I thought we would have competed a bit better. Before the game we said we would have to match them for workrate and then perform to as near our best. We matched them for workrate alright but we just didn’t get the performance right, it’s tough to take.” he said.

The captain said they could not have asked for a better start when Jimmy Feehan had the ball in the Kerry net after thirty five seconds.

“Ya, Jimmy Feehan of all lads to stick a goal, the first time ever, but he stuck it away very well. We couldn’t have asked for more, we probably should have kicked on and been 1-3 or 1-4 up but they got it back to a point very quickly and that goal got them a point up and that was a killer.” he said.

He said the three wides Tipperary kicked at the start of the second half and the save from Michael Quinlivan's shot was the opportunity for them to get back into the game but they just could not take it.

“That was our opportunity, that fifteen minutes we had them on the ropes but didn’t capitalise,”

Acheson said the players were happy with the statistics shown to them at half time but they did not reflct Kerry's quality use of the ball and their strength in the tackle.

“Brian Lacey put up stats at half time, we had ten kickouts won at half time out of twelve, lost two. They had eight kickouts and we won five. We had less turnovers, all the stats were pointing to us to be winning but I suppose their intensity in the tackle and their use of the ball was better in the end” he said.

Acheson said Tipperary players were isolated and were losing the ball in the tackles on the day.

They were surprised by how many men Kerry put behind the ball and they found it very difficult to get good ball into the full forward line.

“Usually there would be more kick passes into Quinlivan and Sweeney but it just wasn’t on today. When we looked up we had to turn back but when you do that against Kerry they have 13 or 14 men behind the ball. They are after bringing that in to their game this year too which is unusual for Kerry. They have 13 or 14 men behind the ball nearly all the time, maybe they were looking down the line to Dublin or something else but it’s hard to break that down unless you get the direct ball straight away or you will be in trouble.

“Quinlivan and Sweeney will score all day for you if you get the ball into them but we didn’t get it into them enough and that was our down fall,” he said.

He expected the experience to drive them on for an assault on the last twelve .

“We missed a goal chance or two and seven or eight points we should have scored. There is a lot of optimism there, we are in the last 12. We will got back training on Friday night so we will take it easy over the next few days and come back hungrier than ever hopefully,” he said.