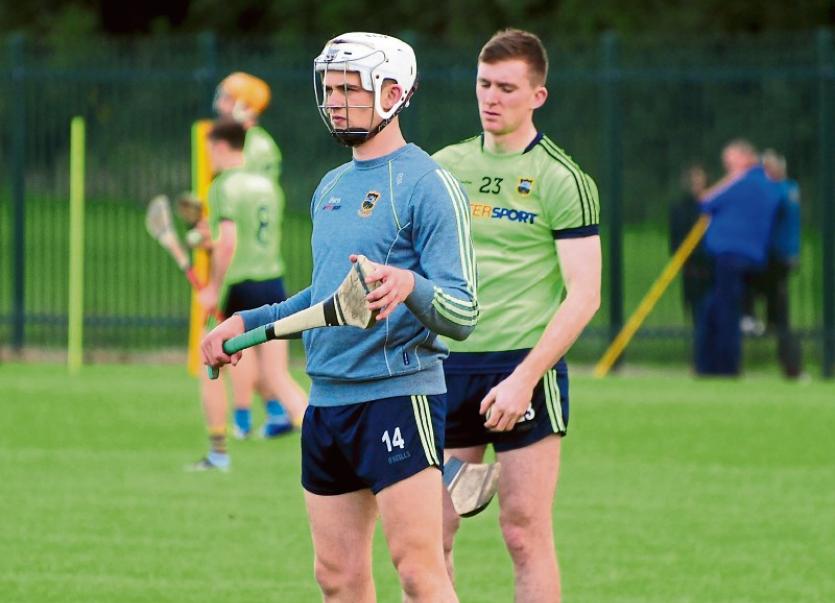 There's a maturity about Tipp centre back Ronan Maher which flies in the face of his tender years. And, it's hard to believe that he has been in the Premier's senior hurling squad for three seasons now, although it is only this year that he has nailed down the pivitol centre back slot.

Ronan made his competitive debut for the Tipperary seniors in January 2014, lining out at midfield against LIT in the Waterford Crystal Cup and was at corner back against Clare for the final of that year which Tipp won. He made his National League debut as a substitute against Waterford in February of that year and then made his championship debut as a midfielder in the qualifier clash with Galway in July - a game which saw him subbed at half time, as was his direct opponent on the night. It was a set-back which could have embittered many, but not Ronan, pictured right in training during the week.

"Ah, I was only a young lad then and it didn't really affect me at all. You know that there will be other chances and all you can do is get the head down and train hard in hope of getting back in again," he says.

Ronan, of course, is brother of Padraic Maher, a man who has been the mainstay of the Tipperary defence for seven years now - he started in An Garda Siochana last week in the Training College in Templemore. Awards aplenty have come Padraic's way, but the Maher brothers don't do chit-chat about up-coming games - only if it is really necessary.

"We just do our own thing really and get on with our own bit of work. There wouldn't be too much conversation at all about the games, but I suppose if it was really necessary we might have a word about something or another. Playing at centre back now, I am aware of a lot more happening around me and I suppose Padraic is too, because he has played there so much. We actually play the other way around for the club - he's at centre and I'm on the wing, so you see things from a lot of different angles and that's a big help too," he says.

Ronan speaks about the necessity of being adaptable to the modern game. That means being able to compete in multiple positions for club and county; being able to think on your feet; and recognising when a change is required in approach. It's this kind of thinking which highlights his maturity but coming from a family steeped in history on both the Maher and McCormack sides, it's no wonder that such hurling wisdom is ingrained.

"You have to be able to adapt to what is happening on any given day, whether there is an extra man, sweeper, whatever. Last year in the Munster Final they played the same game which overcame us in the league, but we got over them in that final. They will come again this year for the Munster Final having beaten us again in the league, so we'll see how the final in Limerick works out," he says.

Limerick indeed. There has been much talk about the venue - Semple Stadium had Hawkeye installed earlier in the year at considerable expense, an indication of the status of the stadium as the best venue outside of Croke Park. But, for the biggest game in the hurling calendar outside of the All-Ireland Final, Semple has been by-passed in favour of a much smaller Gaelic Grounds. Makes sense? Not really, but then that's GAA politics for you. It shouldn't, and won't, bother Ronan though - he is just concentrating on the game.

"I have played in the Gaelic Grounds on a few occasions, with the U-21's and the club. I would have enjoyed a bit of success there, but that won't be a factor on Sunday. It feels a bit smaller and compact than Semple Stadium, but it is not a slower pitch. It will be nice to go back there alright and it's just about doing what we have to do, no matter where the game is played," Ronan says.

He adds, "A lot of the games now have big battles going on in the middle third of the field and Waterford work very hard in that patch and all over the field for that matter. They are very difficult to stop, especially when they start running at you - we saw that in their games with Clare."

That kind of effort and running game puts a lot of pressure on the central man in the Tipp defence and though Ronan has settled in well to the iconic number six jersey, he has no qualms about moving to wherever he is called. "A lot of lads have been played at centre back over the last while between league and championship and I have had a few games there now which has allwoed me to settle a bit. It's not about one player though - you have to work well as a unit and I think we are doing that right now. It helps to have Padraic alongside me and Michael Cahill too from the club is in the team which is another bonus. You gain confidence from knowing them so well having played with them at club and now at county level," he says.

Of all the positions going, Ronan is probably the most unsure about who his direct opponent will be on Sunday. It's a problem which the laidback student teacher doesn't dwell too much upon - whoever turns up, turns up, is his attitude. "I wouldn't be too concerned with Austin Gleeson," he says when questioned specifically about him. "Waterford have so many good forwards and any of them could end up marking you. You can't focus on one player like Austin, because he might not be there at all - it could be any of them. You have to just concentrate on the game and try to win every 50/50 ball," he says.

Ronan is being credited with bringing a bit of grit to the Tipp side - a bit of steel to the defence. This, allied to the fluent hurling promoted by Eamon O'Shea during his term as Boss, would seem to be churning out a perfect formula. So, is the current format the result of this and previous management regime?

"Michael and Eamon are of the same mindset really, but we are probably playing more direct this year. They both tried to bring out the best in the players and having trained under them both, we'd be hoping that there is a lot more to come from us. I'd have huge respect for Eamon.

"The backs got a lot of credit for the win over Limerick but it gives us a great boost to see the forwards winning turnover and snatching scores - that's massive. As a unit, we are glueing together very well and I suppose that's down to us growing together with the games we are playing," he says.

Win on Sunday and that bond will get even stronger than the glue Ronan uses to fix and repair the hurleys he makes for himself - an all-round hurling sticksman.