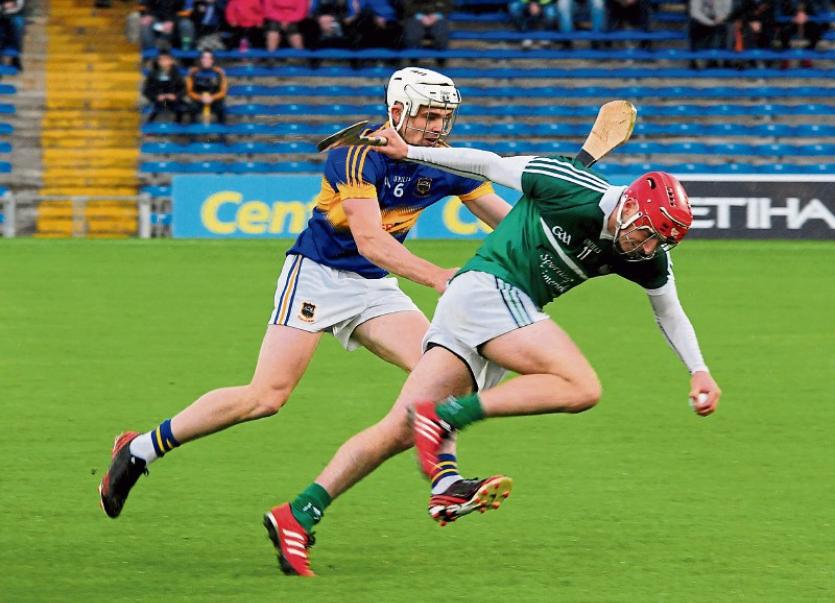 William Maher’s gritty under-21 hurlers smashed Limerick on a bulwark of hard work and smart hurling at Semple Stadium, Thurles on Thursday night.

Tipperary edged this Bord Gáis Energy Munster under-21 hurling championship semi-final by two points (2-12 to 1-13), but may have won by a more significant margin were it not for the excellence of Limerick full-back Richie English.

Limerick, the defending provincial and All-Ireland champions, entered this contest as hot favourites, but Tipperary responded to the challenge posed with a searing collective effort. Manager William Maher (Ballingarry) - alongside selectors Liam O’Shea (Kilruane MacDonagh’s) and John Devane (Clonoulty-Rossmore) - have, most obviously, worked on generating a spirit amongst this bunch. The quality of that work was not immediately apparent and, to be fair, Limerick did look the better side for stages of this contest, but Tipperary stuck at it, the defence, led by man of the match Paul Maher, was magnificent and slowly, but surely Tipp started to wear the defending champions down. With every tackle Tipperary built a fire and the good decisions soon started to run out for Limerick.

Better still, joined-up thinking featured in Tipperary’s game plan - William Maher’s side defended from the front with the attackers working diligently in order to restrict the quality of ball entering the Premier half of the field. The defenders then returned the compliment by working the possession carefully forward.

All in all this Tipperary team was gathered into a unit and aimed at Limerick team in front of 4,020 paying customers. What more could you ask for?

"We worked very, very hard - our desire was great and that hunger did see us through in the end. We might not have had the star-studded hurlers that Limerick had, but we had a lot of guys who have a huge amount of heart and a huge amount of pride in the Tipperary jersey. They were very, very hurt before the game with regards to being two-to-one outsiders. So, that did rally a lot of our fellas and, look, we are just delighted to get the victory. I suppose in these knock-out matches you don't care how much you win by as long as you win and that was very much the message from me inside (in the dressing room) to the guys - that a win is a win and we just move on from here," under-21 manager William Maher told the Tipperary Star in the aftermath of this rousing victory.

With Kilsheelan-Kilcash’s Paul Maher named as man of the match and the performance of the Tipperary defence catching the eye William Maher was eager to highlight the impact that the defensive work of his forwards had on this contest.

"When you talk about defence you have to talk about offensive players as well who only allow mis-hit ball to be hit down on top of our backs. It's very much a team effort when lads are working as hard as they are. I think we had two inside for most of the second half in the full-forward line and they were working like dogs which, obviously, helped the backs," William Maher explained.

The commitment of the side to working for one another was, however, probably best illustrated by notable individuals on the Tipperary team who were asked to perform roles which they would not typically be accustomed to - most notably Barry Heffernan, the Nenagh Éire Óg man is an accomplished wing-back, but was asked to fulfil a role at centre-forward on this occasion.

"I am proud of the efforts of everyone. That was a case of us trying to shuffle our pack around and to maximise the benefit that we could get out of the fellas that we have. They were great. Guys were asked to play in unusual positions, but they put their hand up and there was no problem," William Maher said.

Tipperary trailed at half-time (1-4 to 0-8), but the Ballingarry man denied that he was concerned: "no, I don't think we were worried. We were delighted at half-time to be there or thereabouts - I think there was a point in it; just to be in the match and to have a chance to be competitive. I think that when push came to shove our lads showed the desire and that's ultimately what won the match in the end.

"I think after the seniors and the minors on Sunday they got a huge lift off that; they got a huge confidence boost. Although we were rank outsiders coming in when they put on the Tipperary jersey after what happened on Sunday there was a wave (of feeling) that we could do this. That was great."

The introduction of second half substitutes Jason Ryan (0-2) and Ronan Teehan (1-1) played a significant role in this win - a role William Maher was happy to highlight: "they made a huge impact and I suppose it is something that we talked about as a management team beforehand - that we would try to freshen it as much as we could at vital stages. When they come off it's great and you win. They all came off tonight so it's great”.

Looking forward to the Munster final against Waterford, the 2013 All-Ireland minor champions, William Maher admitted that his side has “a huge amount of improvements to work on”. A significant negative aspect to the display against Limerick, for example, was the concession of nineteen frees (Limerick eleven), but William Maher was not prepared to accept that as a particular criticism of his side.

“I thought the referee was a little bit hard on us with a few of the tackles,” William Maher said.

“Our lads were hitting very, very hard, but I thought they were hitting on the ball. We are going to Waterford now in two weeks' time - that's another massive feat for us because we will be rank outsiders again. Waterford put Clare to the sword last night (Wednesday, 3-23 to 1-11) in very, very impressive fashion. We will be under a lot of pressure going down there, but I suppose if you're not in . . . (you can't win)."

The Limerick management team, led by John Kiely, presented Tipperary with a conundrum from the off when the Shannonsiders played five in attack and Ronan Lynch dropped back to complete a three-man midfield. In response Tipperary maintained a traditional structure for long periods before opting to go with two in the full-forward line during the second half. Outside of such structural issues the determination of the Tipperary lads to maintain a good shape when defending opposition puck-outs and their obvious desire to work back was impressive.

Limerick started the better, but frustrated themselves with early misses before a Josh Keane free presented Tipperary with the lead in the fifth minute. Limerick steadied, however, and responded through Pat Ryan, Ronan Lynch (free) and Séamus Flanagan to establish a 0-3 to 0-1 lead by the eighth.

A right-handed point from Andrew Coffey closed the gap to one before Conor Lanigan converted from a tight angle to tie the game in the 11th minute. Six minutes later a Josh Keane placed ball presented Tipperary with a 0-4 to 0-3 advantage, but three frees from the stick of Ronan Lynch helped Limerick two clear (0-6 to 0-4) by the 27th.

Tipperary had, by now, endured fifteen minutes without a score from play, but that pattern was checked significantly in the 28th. Mark Russell had enjoyed a slight sniff of goal seconds earlier, but with two minutes to play in the opening half Conor Lanigan’s clever pass created the room for Stephen Quirke to attack the heart of the Limerick defence - Andrew Coffey made the supporting run, accepted an off-load and rifled home off his right (1-4 to 0-6).

Limerick closed out the half with points from Tom Morrissey and Ronan Lynch (free) to lead by one at the break (0-8 to 1-4), but Tipperary were very much in this contest. A matter of concern at this juncture was the fact that William Maher’s men had already conceded nine frees - you would make allowances for the wet conditions but only so many. In the second half Tipp conceded ten.

Three minutes into the second period a Conor Lanigan effort was saved by Limerick ‘keeper Eoghan McNamara before, in the 35th minute, Lanigan fired over an equaliser from a tight angle following a neat assist from Barry Heffernan. Then, just two minutes later, Tipperary took the lead thanks to a Josh Keane free (1-6 to 0-8).

Points from Ronan Lynch (free) and Barry Nash book-ended a Josh Keane effort from play soon after - the sides entered the final quarter all square (1-7 to 0-10).

Limerick’s discomfort in attack was illustrated when John Kiely opted to withdraw three of this starting forwards before Jason Ryan made his first touch of the ball a significant one in the 51st minute when firing Tipp into a narrow advantage. Seconds later Seán Ryan won a terrific turnover and Tipperary streaked forward to where Andrew Coffey belted William Maher’s men into a 1-9 to 0-10 lead.

Two Ronan Lynch frees for Limerick and a Mark Russell point for the home side left a point in it before Tipperary created another goal-scoring opportunity in the 57th minute - the raiding Stephen Quirke was denied by a sensational Richie English block, but Quirke then sensibly re-cycled possession and played a key role in a vital Jason Ryan point (1-11 to 0-12).

The pressure on the Limerick defence told in the 58th minute Stephen Quirke broke Brian Hogan’s long-range free and Ronan Teehan rifled home a first-time effort. In the 60th minute Darragh O’Donovan thundered home a Limerick goal following a scramble inside the Tipperary 21-yard line and, suddenly, the Shannonsiders were in with a shout. A minute later disaster almost struck when Darragh O’Donovan wound up once more, but Jack Shelly intervened with a brave block.

Ronan Teehan struck a rousing Tipperary point in the 62nd minute, but there was still time for Limerick to earn a free deep inside the Premier half - Ronan Lynch took responsibility for this late opportunity, but failed to make a telling connection and his shot flew over.

Tipperary will contest the Bord Gáis Energy Munster under-21 hurling championship final on Wednesday, July 27th against Waterford at Walsh Park, Waterford. This group of players would appreciate your support on the night.