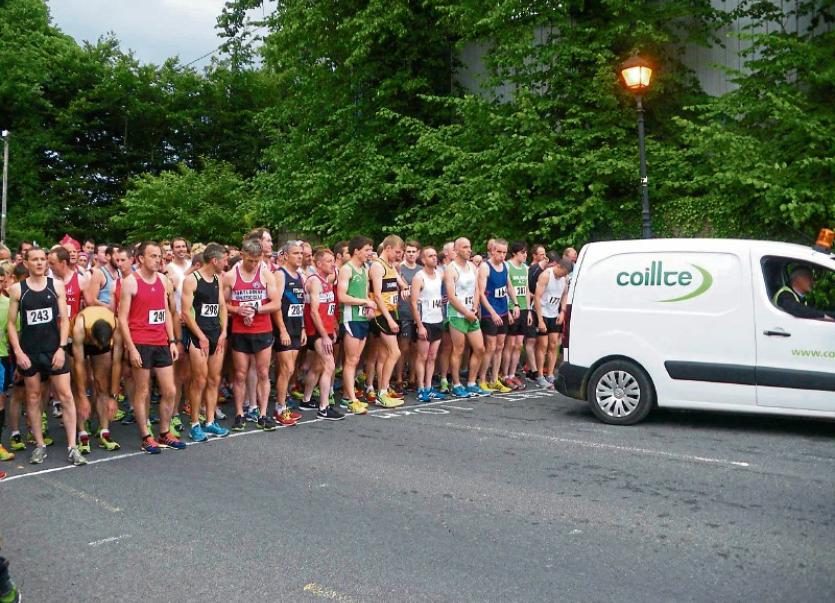 The annual Coillte 10k, which also includes a 5k for Juniors, was run for the 31st time on Wednesday last hosted by Dundrum AC.

On a good night for racing a huge field of over 300 runners went to the start line representing 44 different clubs.

After a moment's applause in memory of the late John Butler, who was a great servant to the club and this race in the eighties and nineties, his son Pierce blew the whistle to set them on their way.

On the staggered start to accommodate the 5k distance Nenagh Olympic Junior Darren Dunne was gone from the whistle, never caught and came home in a course record time of 15:12 knocking eight seconds off the old record which had stood since 2004.

The same applied to junior woman Louise Stack who came with the large contingent from Portlaoise AC. Louise was also gone from the whistle and came home in a magnificent time of 19:05 and in the process knock 3 seconds off the old junior record which has stood since 2001.

Maybe someday they will return and become a member of the select few to win 5k and the 10k.

Eddie Allen EMO/Rath in 18:18 and Domhnall O’Farrell Portlaoise 18:48 were 2nd and 3rd respectively in the junior men. While Sorcha Moloney Ballyroan 20:38 and Poppy Hackett St Michael’s 21:30 took second and third in the junior women to ensure a midlands domination of the 5k

In the 10k Declan Moore, Bilboa like the junior winners was again gone from the whistle. Declan who has been running very well of late came back into the village after one lap well clear of the field.

Declan kept the strong pace going out on the second lap to come home a very convincing winner in a time of 32:38 to add a new name to the winners list.

Declan also became one of the select few to have won both races having won the Junior 5k in 2012. John ran on well to come home a clear second in 33:08.

Brian Murphy held off Danny Smith for 3rd and 4th respectively in 33:41 and 33:45 respectively. Danny once again won the Tim Crowe trophy for been the first Tipperary athlete to finish the 10k presented to him by the sponsor of the trophy Dominic Moore after the event. Bernard and Trevor finished two seconds apart in 33:51 and 33:53 for 5th and 6th respectively.

The category section had some tremendous battles with Martin Doody 3rd overall and 1st over forty in 33:34 followed by Barry Minnock, Nuparc in 34:03.

Local man Dermot Hayes, Dundrum kept the host club in the prizes with a great win in the over forty five section in 36:05 from Peter Madden, Templemore in 37:09.

Paul Moran, Rathfarnham made the trip from Dublin and had a magnificent run to break the over fifty record by 66 seconds which had stood since 1996 finishing in 34:12.

Aengus Burke from Portlaoise also broke the record when finishing 2nd in 34:59.

Brian O’Reilly made his annual trip from Cavan to win the over fifty five section in 42:38. The last record on the night broken was by James O’Sullivan Tipperary Town who knocked 21 seconds off the old record for a great run and win in the over 60 section in a time of 40:15.

Second and 3rd place had a tremendous battle between Clonmel’s Aine Roche and Dundrum’s Linda Grogan with Aine getting the nod in 40:43 from Linda in 40:47, Linda knocking 91 seconds off her previous best time.

Well done to all on a great nights racing.