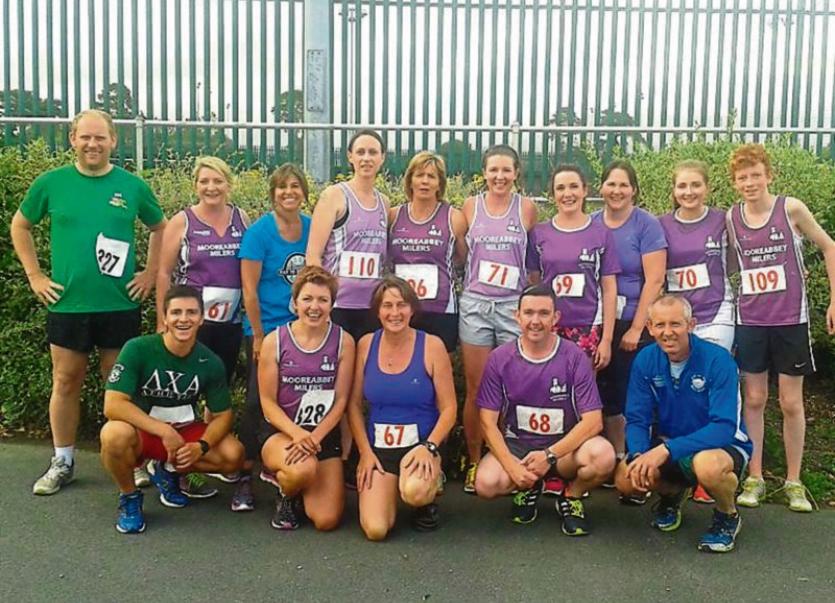 It has been back to business as usual following the success of the club's Cahir Downhill Half Marathon. Club members have been busy competing on the roads, trails and mountains over the last week.

The MMRA Wednesday League visited county Tipperary last week. Tountinna, near Ballina, on the shores of Lough Derg, was the chosen hill for this race. Three club men raced on the night and all three finished quite close to each other. Willie O'Donoghue was 12th followed by Robert Cunningham with his son Ewan Cunningham seven seconds behind him. Killeagh woods in East Cork is the venue for this weeks race on July 20th at 8.00 pm. This will be followed by Murroe on Wednesday 27th at 8 pm.

No less than sixteen Mooreabbey Milers supported the Canon Hayes 10k and 5k last Friday 15th in Tipperary Town. The event was to raise funds for the recreation centre and a donation would be given to Pieta House. Ewan Cunningham was delighted to take his first ever race win in the 5k. A well deserved win. Paddy Bourke was third male and Pauline Chapman was third female. Also running very well in the 5k were Niamh Blackburn, Tricia Ryan, Anne Finnan, Roger Sampson, Danny Neville, Caroline Bourke and Deirdre Hayes. Running in the 10k race were Aoife Courtney, Paul Rennie, Louise Rennie, Tricha Blackburn, Carol Quish and Kathryn Hogan. Well done to all who took part on a very warm evening.

Tom Blackburn and Robert Cunningham made the journey to Kerry to take on the challenge of the Carrauntoohil East mountain race last Sunday 17th. One of the longest races in the Munster Championship, this was a very challenging 15k course on tricky terrain up Ireland's highest mountain. The sun and heat of the day made running up a mountain tougher. Tom Blackburn took 2nd place on the day and Robert Cunningham ran strongly in 14th position. The next race of the Muster Championship will be on the Comeraghs in Waterford on July 31st. The Irish Championship will continue next Saturday July 23rd in county Wicklow on Lug na Coille. The very best of luck to all our runners competing in these events.

Training continues every Tuesday and Thursday evening at 7 pm in the community field. As always, anyone who wants to join us for these sessions would be more than welcome to do so.