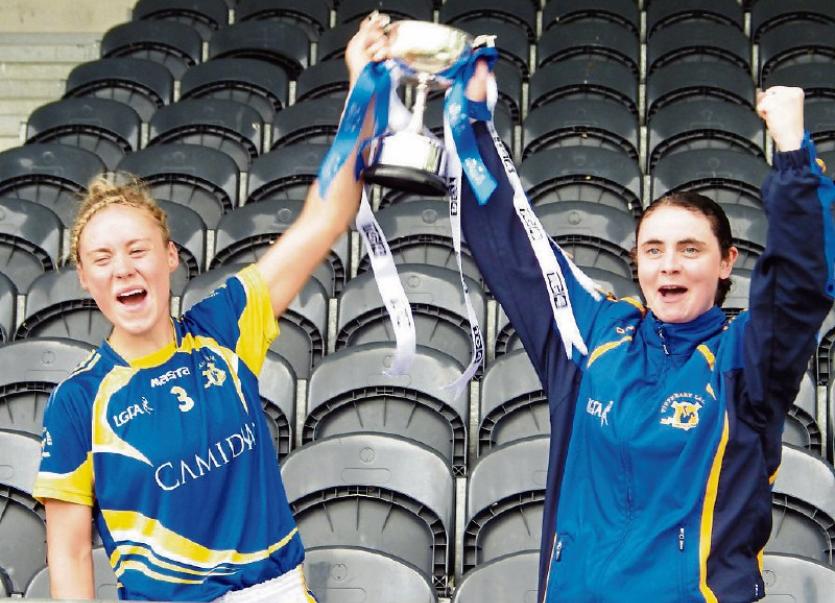 Tipperary came from five points down at half time to put in a brilliant second half and beat Clare to win their first Munster Intermediate title at Mallow on Saturday.

There were wild scenes of delight at the final whistle as this win goes a long way in making up for the disappointment of losing a replayed league final some months previously.

Tipp are now through to the All Ireland semi-final where they play either Down or the winners of Wicklow/Roscommon.

Clare had the advantage of a fresh breeze during the first half but it was Tipperary who opened the scoring with two unanswered points from the Cahir duo of Aishling McCarthy and Aisling Moloney within two minutes. Clare replied with a fine goal from Ciara Hickey and followed up with a point from Ailish Considine.

Aisling Moloney had another Tipp point but Clare hit a purple patch and scored three unanswered points with Niamh O’Dea and Ailish Considine doing the damage.

Moloney and Catriona Walsh hit two points for Tipp to narrow the gap but once more Clare fired over three of their own. Tipp tried hard to claw back the lead but when the Clare keeper saved well on twenty five minutes it looked ominous for Tipperary heading towards half time. O’Dea had another two points with Tipp’s McCarthy managing a pointed free just before half time to leave it 1-8 to 0-6 at the break.

Tipperary had wind advantage in the second half and came out in a more determined manner to take the game to Clare.

O’Dea extended Clare's lead in the early stages but Gillian O’Brien had come on for the second half and she was now busy getting onto a lot of ball. The experienced Mairead Morrissey showed great determination to fist over a nice point after evading a number of tackles and there then followed three unanswered points from Tipperary from Edith Carroll with two and Gillian O’Brien with one.

O’Dea had another point but the Tipp defence and midfield were now showing for early ball and pressure up front was telling and frees conceded were duly punished by McCarthy. It was still 1-10 to 0-10 with 11 minutes gone.

Two more pointed Tipp frees by McCarthy saw the minimum between the sides and Tipp were finishing strongly. O’Dea again put two between them but not to be outdone Aisling Moloney immediately cancelled this out with a beautiful rallying point from distance.

O’Dea and another Moloney point again left just a point between the sides with three minutes plus stoppage time remaining. The turning point and decisive score came in the 29th minute when following some wonderful defensive harrying work by Jennifer Grant and Anne O’Dwyer, the ball moved quickly upfield where Moloney gathered in the corner and her pin point pass picked out the powerful run by midfielder Lorraine O’Shea who made no mistake with just the goalie to beat.

Clare hit back with a point but Tipp's insurance point came from Moyle Rovers' Gillian O’Brien into stoppage time when she stroked over one of the best points from an acute angle with 34 minutes played.