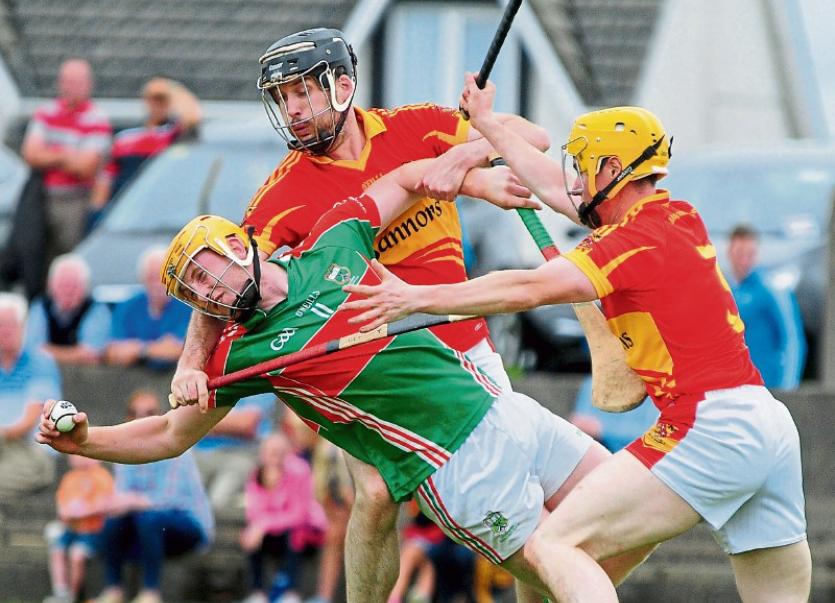 Favourites Loughmore-Castleiney hit Moycarkey-Borris with 3-9 in a blistering third quarter to establish an eighteen-point lead which, in reality, brought the curtain down on this Centenary Agri Mid Tipperary senior hurling championship semi-final at Boherlahan on Sunday last.

Moycarkey-Borris were playing to keep their season alive as well as qualifying for the Mid final, but when Loughmore-Castsleiney hit a purple patch at the start of the second half they had no answer to the McGrath trinity of John, Noel and Liam.

Despite conceding a goal in the 13th minute when Noel McGrath finished off a John McGrath pass, Moycarkey battled with great resolve to be only three points adrift at the break - 0-10 to 1-10. They were 1-4 to 0-1 down after that goal, but with Pat Ralph deadly accurate from frees and Kiernan Morris posing a constant threat they fought their way into the game.

Loughmore were still 1-10 to 0-8 clear as injury time in the half arrived, but points from Pat Ralph and Christy McCullagh for Moycarkey-Borris edged them closer and gave them heart for the second half.

What a transformation there was in that third quarter. Four points in six minutes, three from Liam McGrath and one from John, had Loughmore hitting the ground running. A disastrous short puck-out for Moycakrey presented John McGrath with the chance for a 36th minute goal and he didn’t have to be asked twice. Loughmore added four more points to be 2-18 to 0-10 ahead.

A brace of Moycarkey points offered token resistance before Noel McGrath took a pass from John for a goal in the 42nd minute and Liam McGrath made a fine run before netting the winners’ fourth goal and a 4-10 to 0-13 lead.

Most definitely there was no way back for Moycrkey now. Indeed, they had goalkeeper Bill McCormack to thank for a string of quality saves as the rout continued.

There was small consolation for Moycarkey four minutes from time when Kieran Morris netted from a free, but by then Loughmore’s position in the final was beyond question and they could look back on an excellent day’s work.

On their form of the second half Loughmore-Castleiney were hugely impressive and but for the efforts of Moycarkey goalie Bill McCormack its anybody’s guess what their tally might have been - he made at least a dozen top-drawer stops to deny the rampant Loughmore lads further green flags. If Loughmore had a concern it was that they were sluggish enough in the first half and could have paid the penalty against stronger opposition.

Not for the first time the McGraths led the way for Loughmore with John, Noel and Liam looking very sharp and decisive in all they did. John Meagher was also on top of his game in defence while Liam Treacy was another to have a very good hour.

Moycarkey’s year is at an end, but they will be happy to have consolidated their senior status and their challenge now is to build on what they have achieved. Clearly they have a bit to go before they are ready to mix it with the top sides, but in Bill McCormack, Rory Ryan, Pat Molloy, Kieran Morris and Pat Ralph they have leaders to show the way.