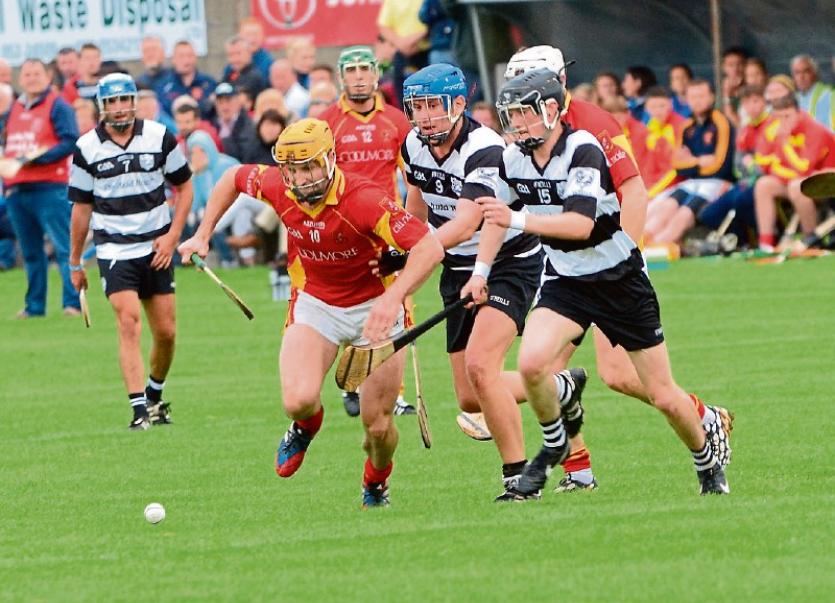 In the second game in the Monroe double bill on Saturday, Killenaule burst out of the traps like good greyhounds.

Billy Barrett found the net inside a minute. Kieran Bergin pointed before another minute had passed.

Then the tempo stilled for a while. Swan's Danny O’Hanlon and Killenaule's Thomas Keaveney exchanged points. Gavin O’Halloran pointed for Swan before “Bubbles” O’Dwyer blasted a close in free to the Swan net on 13 minutes.

This was a major setback to Swan, but they hit back with two points in the 14th and 17th minutes. Killenaule responded with three points in a row in the 17th, 18th and 19th minutes from Keaveney and Niall O’Dwyer (two).

The next five minutes were scoreless, but in the run in to half time Killenaule pointed three times while Swan replied twice. Half time score Killenaule 2-10, Carrick Swan 0-10. All during the second quarter, their two goals had kept Killenaule about six points clear as they matched Swan’s comeback attempts point for point.

The third quarter followed much the same pattern as Swan upped the tempo and Killenaule responded. After 15 minutes the score stood Killenaule 2-16 Swan 0-17. Killenaule’s points had been shared out between Eoin Barry, Bubbles O’Dwyer, Michael Doyle and Daniel Guinan while Danny O’Hanlon frees especially were the principal scores for Swan.

Others to chip in were Aaron Dunne and Colin Loughman. O’Hanlon’s point on 45 minutes came from a 65. Swan now began to gain some control of the game. Aaron Dunne pointed to give us a four point game, but two Killenaule points in the 18th and 20th minutes increased the gap to six.

In the 21st minute Swan won a free when a forward going through was brought down. The culprit was lucky to stay on the field, but the free was moved forward for dissent. Danny O’Hanlon emulated “Bubbles” and goaled to bring the margin back to three points.

This was a game that Swan had to win to reach the final. They pressed forward, but couldn’t notch another score in spite of near misses. In that last ten minutes nearly all of the attacking was done by Swan and three or four good clearances out of Killenaul’s defence came from a roving John O’Dwyer.

On 25 minutes O’Dwyer popped up to point yet another free and give Killenaule a safer four point lead. This lead remained until referee Keith Delahunty brought the game to an end with Killenaule just about containing the final onslaught by Swan.